After hitting the zombie jackpot with The Walking Dead, AMC is going back to the supernatural horror well once again with the creepy-crawly NOS4A2 — and to its credit, the series does boast a breakout performance from newcomer Ashleigh Cummings. It’s just too bad that nothing else about the show lives up to that performance. Instead, any flickering glimmer of quality gets smothered by a drab visual palette, sluggish plotting and a crushingly dour tone. 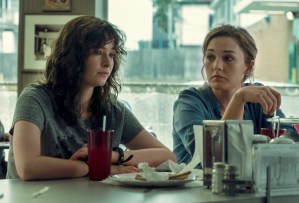 NOS4A2 — debuting Sunday, June 2 at 9/8c; I’ve seen the first three episodes — is unfocused from the start, straining to tell two very different stories. One features Zachary Quinto as seductive villain Charlie Manx, who lures neglected kids away to his magical “Christmasland” while feeding off their souls to stay young. The other features Cummings as Vic McQueen, a poor teen from the wrong side of the tracks who dreams of going to art school, but can’t afford it. Her blue-collar parents are always fighting: Her dad (played by Girls‘ Ebon Moss-Bachrach) even warns her, “Never get married, never have kids.” (Gee, thanks, Dad!) But we eventually learn that Vic might have supernatural gifts of her own.

The tone here from showrunner Jami O’Brien (Fear the Walking Dead) is dark and solemn, trading in TWD‘s action and gore for a Stephen King-esque eerie vibe. (Which makes sense: King’s son Joe Hill wrote the novel NOS4A2 is based on, and is an executive producer.) But it’s moody to the point of being morose, wallowing in ugliness for no apparent narrative purpose. (The children after Charlie sucks the life out of them are a gruesome sight indeed.) It’s the TV equivalent of a sullen Goth teenager, mistaking darkness for depth; even the visual style is flat and off-putting. Meanwhile, Vic’s family stuff is a melodramatic drag, and doesn’t mesh at all with the supernatural storyline. It takes far too long for Vic to get a handle on what her powers entail, and as a result, we spend far too much time watching a mediocre divorce drama that we did not sign up for. 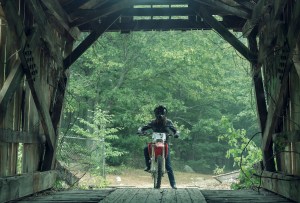 NOS4A2 does offer up some evocative imagery here and there, like a rickety old covered bridge that only Vic can see and transports her across time and space. I also liked the kooky energy of tattooed mystic Maggie (Jahkara Smith), who uses magic Scrabble tiles — no, really — to predict the future. (What if she’s putting them together wrong, though? What if she can’t spell?) But the rules of this world are frustratingly hazy — so Charlie is a vampire, but not the blood-sucking kind? — and the hints we do get aren’t interesting enough to hold our attention.

Quinto is the big name in this cast, but he’s overblown here, verging on campy as he employs a creaky old-man voice to play a rapidly aging Charlie. Cummings really does stand out, though. She has a Jennifer Lawrence quality about her and brings a hard-won authenticity to her scenes, even when they don’t deserve it. (I don’t really understand why her TV mom has such an over-the-top Boston accent, though, and she doesn’t have one at all.) I look forward to seeing what she does next, because she’s definitely a diamond in the rough… but what’s around her is very, very rough.