Barry‘s two worlds collided in Sunday’s Season 2 finale — quite violently, actually — but where did he stand when the smoke cleared?

We pick up where we left off, with Barry sprinting through the woods to reach Fuches, who’s pointing a gun at an unsuspecting Gene. But Fuches stops when he hears police sirens and runs off, and when Barry arrives, he finds Gene weeping inconsolably and shuts the car trunk containing Moss’ body. At the police station, the cops let Barry go… and tell him they think Gene killed Moss, so they’re keeping him in custody. An enraged Barry calls Fuches to inform him: “I’m coming for you. You’re a f–king dead man.” 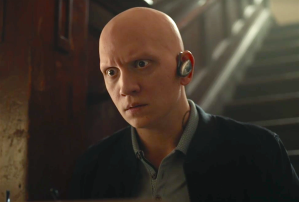 Hank has problems of his own: He’s still on the outs with his Chechen henchmen (try saying that three times fast), with sharpshooter Mayrbek stepping up as de facto leader. He attempts to find a new niche, politely haggling on the phone to secure the perfect table on which to display 30 kilos of heroin — God, Anthony Carrigan is a gift — but he’s interrupted by a call from a fellow mobster from Chechnya who’s heading to L.A. to replace him and ship Hank back to his homeland. Uh-oh… does Chechnya even have a “Noho” district?

Barry is still stewing about Fuches when Sally shows him the cavernous theater where they’ll be doing their acting showcase. (Their classmate Nick is busy rehearsing vomiting into a toilet.) Barry insists Gene will be there in time for the show, but Gene is still with the cops, getting interrogated by Loach’s partner Mae. Catatonic with grief, he insists the phone call confession wasn’t his voice, but she thinks it sounded like him. (Really? Is Mae not a very good detective?) They place him under arrest, and when Barry finds out, he sees red. He calls Fuches and threatens his life… even as Fuches reminds him he could save Gene by just confessing to Moss’ murder. Fuches arranges for back-up, too — by hiring Hank’s army!

Hank warns him, though, that his henchmen no longer listen to him, and as they’re negotiating, a none-too-pleased Cristobal and Esther pull up in the parking lot. Fuches plays peacemaker, calling himself Hank’s “representative” and selling Cristobal on the fact that his partnership with Hank is just in a “transitional phase” — drawing a lot from his own relationship with Barry. Whatever he says, it works like a charm: Cristobal breaks down in tears and hugs it out with Hank. The heroin party is back on! (Although Esther doesn’t look convinced.) 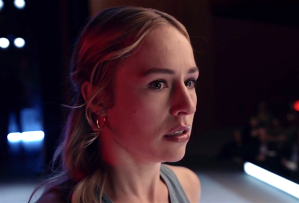 Back at the theater, Sally is stressing out as the showcase begins. She unloads her anxieties on a zoned-out Barry, asking him over and over again: “Telling the truth is the right thing to do, right?” Sensing he’s out of it, she slaps him hard before they go out on stage, and Barry’s eyes go frighteningly dark. Is he going to act out their choking scene a little too well? No, in a classic Barry reversal, it’s Sally who goes off-script: She flips the table and acts out the heroic version of her breakup with Sam — the one that’s a total lie. She sobs to her agent afterwards that she panicked and blew it (“I’m not an artist!”), but her agent’s bosses actually loved it, and audience members come up in droves to congratulate her. So maybe telling the truth isn’t always the right thing to do?

Barry is still struggling with that, it seems. He calls the sheriff’s office, presumably to confess, but then hangs up and calls Gene’s cell phone. Gene’s son Leo answers and tells Barry that Gene has been released; the cops found a Chechen pin in Moss’ trunk that translates to, “The debt has been paid,” so they’re pinning this on the mob. (Barry must’ve slipped that pin into the trunk with Moss’ body. It was a gift from Hank, right?) Barry asks Leo to tell his dad that Barry Berkman (not Block) called, and to tell him “he was right. I’m pretty sure people can change.” But then Barry gets a text from Hank: “Problem is solved. Fuches is here.”

Barry storms over to the monastery, where the heroin party is in full swing — Hank’s dance moves are killing me — and when Esther recognizes him as the “Lululemon” guy, he calmly puts a bullet in her forehead. Barry starts gunning down everyone in sight as Fuches runs for cover, leaving a trail of bodies in his wake. Inside a room, Mayrbek waits patiently with his finger on the rifle trigger, but when the door opens and he sees it’s Barry, he relaxes… and Barry shoots him dead. Fuches peels out in a car, and only then does Barry realize the carnage he’s unleashed. He shudders when he sees Mayrbek’s lifeless body, and walks out… into darkness. (Luckily for Hank, though, his Chechen replacement shows up just then and assumes Hank redeemed himself by slaughtering everyone in the room.)

But before we close the book on Season 2, we see Gene being tenderly put to bed by his son Leo. Gene recalls some fond memories of his time with Moss, and winces when he remembers seeing her body. But he also remembers that Fuches whispered something in his ear before running off: “Barry Berkman did this.” He sits up straight in bed, and — in a truly Hank-on-the-toilet-in-Breaking-Bad moment — gasps: “Oh my God.”

Now it’s your turn, Barry fans: Give the Season 2 finale a grade in our poll, and hit the comments below to share your predictions for Season 3.