The Riverdale gang is heading into their senior year… but will they all survive to see graduation?

Wednesday’s Season 3 finale, which saw Penelope put Archie and his friends through a demented game of G&G with life-and-death stakes, hit us with a barrage of shocking moments like arrows from Cheryl’s bow. Chic is alive, and the Gargoyle King! Penelope killed Hal! Alice and Polly “ascended” into thin air along with Edgar and the Farmies! But Alice was actually working undercover… with Betty’s brother Charles, who’s alive, and an FBI agent! (Charles is Jughead’s brother, too, remember… but let’s not think about that too much.)

But the biggest shocker came last, with Archie, Veronica, Betty and Jughead sharing a milkshake toast at Pop’s and pledging that their senior year won’t include solving any murders. Flash-forward to: spring break, with Archie, Betty and Veronica covered in blood and burning their clothes in a big bonfire in the woods. They vow never to speak of this again (whatever “this” is)… and Jughead is nowhere to be seen. In fact, Archie throws his pal’s signature beanie on the fire. Whaaaat?!?

Naturally, we had about a million questions after that finale, so TVLine reached out to Riverdale showrunner Roberto Aguirre-Sacasa, who shed some light on the finale’s many mysteries. Read on for his explanation of that Jughead-less cliffhanger, Cheryl’s unnatural bond with her dead brother Jason — and if we can say Archie and Veronica are truly back together again.

TVLINE | We get that milkshake toast, with the gang vowing no more murder mysteries. But then we flash-forward to spring break, and something terrible has clearly happened, and Jughead is conspicuously missing. How worried should we be about Jughead?
Very worried. [Laughs] Very worried.

TVLINE | Is what led up to that moment in the woods the big mystery of Season 4?
Yeah, absolutely. Every year, we try to explore a different genre, or a different type of pulp or noir trope. This next season, it’s sort of our homage to the novels we read growing up, like Christopher Pike and Lois Duncan, [who wrote] I Know What You Did Last Summer and Killing Mr. Griffin. I’m a huge fanatic of Donna Tartt’s novel The Secret History. So we kind of wanted to explore a genre that focused on the school and the students, and that’s what led to the flash-forward.

TVLINE | We also saw Chic come back as the Gargoyle King, posing as Jason. Did you always plan to bring him back?
Yeah, since we never saw his body… [Laughs] We were sort of beholden to bringing Chic back. But we all really loved that character, and loved that actor. We were just figuring out what the best way to bring him back was. It’s funny: [Hart Denton, who plays Chic] kept saying, “Are you really going to bring me back?” And I was like, “Yeah, wait, it’s a couple more episodes!” And we got him in at the very end.

TVLINE | Betty’s dad Hal is dead now… or is he? Can we trust that anyone is ever really dead on this show?
It’s a good question! I always say, “You never know for real.” But I do think that Hal is finally, really, truly dead. 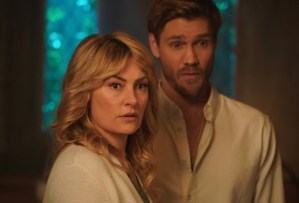 TVLINE | Betty also lost her mom Alice when she vanished into thin air along with Edgar and The Farm. Will we be unraveling that mystery next season as well — possibly with the help of Charles?
Absolutely. I would say we’ve pretty much played out the story of The Farm. The one story still left to tell is, Betty and Charles and Jughead have to extract Alice from wherever The Farm is holed up in. So that’s something we’re going to address early on in the season.

TVLINE | Cheryl got away from The Farm, but now she has Jason’s dead body propped up at home, Psycho-style. Has she gone completely off the deep end?
Yes and no. We were talking about this in the [writers’] room. Cheryl is a character who will always be defined by the loss of her brother, and her love for her brother… and that’s why she so readily joined The Farm. Someone allowed her to be back in touch with her brother. We really thought that at the end of the season, would Cheryl immediately put him back in the ground and say goodbye to him again? Maybe not. Maybe she would delay that as much as possible. Is it crazy? Sure, it is crazy. Do I think Jason is talking to her the way Mrs. Bates talked to Norman? No, I do not think that.

TVLINE | Aside from all the life-and-death stuff, we saw Archie and Veronica reconcile. Is it safe to say they’re a full-on couple again?
I… can’t say that definitively.

TVLINE | Hiram did get thrown into prison, but it’s literally a prison of his own making, with his name on it. So is he still a force to be reckoned with?
Absolutely. In a weird way, Hiram is the king in his castle now. He’s in his place in his power, so I don’t think we’ve heard the last of him.

Alright, Riverdale fans, it’s your turn: Give tonight’s finale a grade in our poll. Got thoughts to share, too? Grab a booth in the comments.