It was the end of the long and winding road for four semifinalists on Tuesday’s episode of The Voice. Following Monday’s performances of individual songs and Beatles duets, the Top 8 was whittled down to the Top 4, with three singers advancing automatically based on overnight voting, and a fourth chosen via the now-or-never Instant Save.

Before we found out the identities of the Fab Four who’d be competing in next week’s Finals, we were treated to a dramatic performance of “God’s Country” by Blake Shelton; Chris Branch sang the praises of a credit card in exchange for the chance to warble a few bars of “Ain’t Nobody” on stage; Kelly Clarkson teamed up on “Chances Are” with her lone team member Rod Stokes, whose pitchiness was worse than I thought we’d ever heard it in the competition (WTH?); and Season 9 runner-up Emily Ann Roberts returned to perform her single “Someday Dream.”

And in the moments of truth…

Andrew Sevener (Team Blake), “Simple Man” — Grade: C | I’m a big fan of that gravelly quality to Andrew’s voice. And we’ve seen him be a pretty great entertainer. But this song was just too low-key, I thought, to generate enough excitement to win him the Instant Save. Also, when he went for the bigger notes, it seemed like he was a smidgen off, maybe owing to nervousness. “Andrew is the real deal,” his coach said afterwards, “and country to the core.” 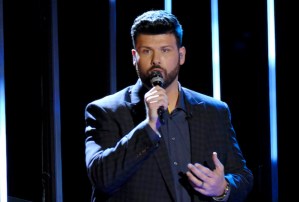 Rod Stokes (Team Kelly), “Brother” — Grade: B- | After that disastrous duet with Kelly, I was not looking forward to hearing Rod sing again Tuesday. But he rebounded pretty well and reminded me why we’d ever liked him in the first place. No, his vocal wasn’t Maelyn Jarmon-flawless. But his performance felt organic, like he was really inhabiting it. “You have such a classic voice,” said a teary Kelly afterwards. And she was onto something there.

Shawn Sounds (Team Legend), “That’s What I Like” — Grade: B | When Shawn set foot on the stage, it came alive. I wasn’t nuts about his song selection — it didn’t show off the smoothness and precision with which he usually sings. For my money, it’s really ballads on which he shines. Yet this was vocally solid and had energy, and he seemed to have fun being swag. When he was through, his coach told him, “You do it all, and you do it beautifully.” I wouldn’t have been sad to see any of these guys put through to the Finals, but Shawn was all season long the strongest to me. This slot should have been his to lose.

So, what do you think of the group that made it to the Finals? Vote for the cut that hurt the most below — Shawn for me! — then register your approval and/or complaints about the Top 4 in the comments below.