The following contains major spoilers from Season 4, Episode 6 of Lucifer (now on Netflix), plus thematic spoilers from Episode 8.

Not long into Lucifer Season 4, Amenadiel is one beaming dad-to-be, upon learning that Linda, a human, is pregnant with their child. But no sooner have the two generously bubble-wrapped Linda’s home than Amenadiel privately learns that his sister, Remiel, has arrived on Earth with a pretty damn harrowing mission.

TVLine spoke with DB Woodside about the dilemma that Remiel creates for her brother, as well as the other, more overt way that Season 4 tackles the issue of race.

TVLINE | In Episode 6, Remiel (played by Vinessa Vidotto) arrived on Earth and stated her mission, to find the hybrid baby and cut it out of whomever’s stomach, to take it to the Silver City. Talk about Amenadiel’s reaction and the struggle that it creates within him.
I love the character of Remiel. The way they’ve set her up is that she is Amenadiel’s clone, and as probably one of the youngest siblings she became attached to Amenadiel and his ways. She’s gotten word that there is an abomination happening on Earth, a child that’s half-angel, half-human. The way the writers set it up, I think they were somewhat nervous about touching on issues of race, so they came up with a metaphor to discuss that topic by having a child be mixed [in a different way]. This was their way to basically talk about half-black, half-white child, and what it was going to be like for that child growing up.

TVLINE | Remiel’s mission creates this really juicy, internal debate for Amenadiel. At first, we’re like, ‘No way is he going to give up his and Linda’s baby,’ but he does face some conflict.
He does. One of the things I love about this season is I think they really tried to tackle race, inclusion and diversity in many different ways. He’s conflicted because on the one hand, there’s this wonderful child coming into existence, and as a dad, one thing that you realize when you have a child is all of a sudden you become a part of this fraternity. Whether you have a boy or a girl, whether your child is black, white, Asian, Latino, you’re a parent, and parents can identify with other parents and all the hell that we go through with our children. But when you step out into the world and see the way that people treat your child or the way they treat you…. Amenadiel really hadn’t thought about that until Remiel came down and warned him, so it gets him to actually start to think— 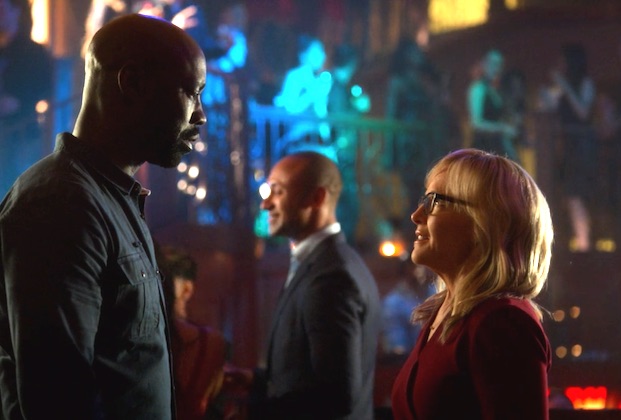 TVLINE | “Maybe the Silver City is the best place for this child.”
Especially after he has that run-in with that lovely, sweet, young black man in Episode 8 (Caleb, played by Denny Love). He was just wonderful, absolutely wonderful….

TVLINE | I noticed that, too, in Episode 8. “This kid’s really good.”
He was phenomenal, and a joy to work with; I really hope to see him go on and on and on. But Amenadiel is scarred by that situation with Caleb, and then decides that the Silver City is the best place for his child. And that’s a tough thing, because being a dad myself, I wonder sometimes — a lot of times, actually – where is the best place my child to grow up, given the state of the world.

TVLINE | Let’s talk more about that episode with the profiling. How did you feel when you first saw it was coming down the pike?
This was something that I’ve wanted to do for a long time. I mean, we’re all in the business of television and television is the most powerful medium, and I like to use that power. I like to embrace that power because we all have an awesome responsibility, and television can literally change people’s perceptions.

I always love tackling controversial topics. I love doing things that make people feel uncomfortable, that make people think outside the box. So, when this episode came along, I was overjoyed and at the same time nervous. It’s difficult to be an actor of color and then be doing subjects like this. I think that at the time, we only had one junior writer of color in the writers’ room, so I can imagine that he was probably feeling a responsibility to assist his coworkers, just as I myself kind of felt that I had an awesome responsibility as the only black member in the cast. It was definitely challenging, definitely scary, but I think everyone did an absolutely amazing job and handled it with sensitivity. I hope that maybe we all even learned a little something from doing that episode.

TVLINE | Amenadiel, as the officer has a gun drawn on him, is oblivious to what’s going on. Though he is a black man, that is probably not first and foremost on his mind because he possesses bigger differentiating factors, being an angel.
Absolutely. Celestials are basically representations of humans, right? So, I love the fact that the two sisters of Amenadiel’s that you’ve met are Asian. Amenadiel himself is black. Lucifer is white. Maze is multi-cultural. The celestials look like the world, except they don’t have the same hang-ups that we have down here. And there is something incredible about that. 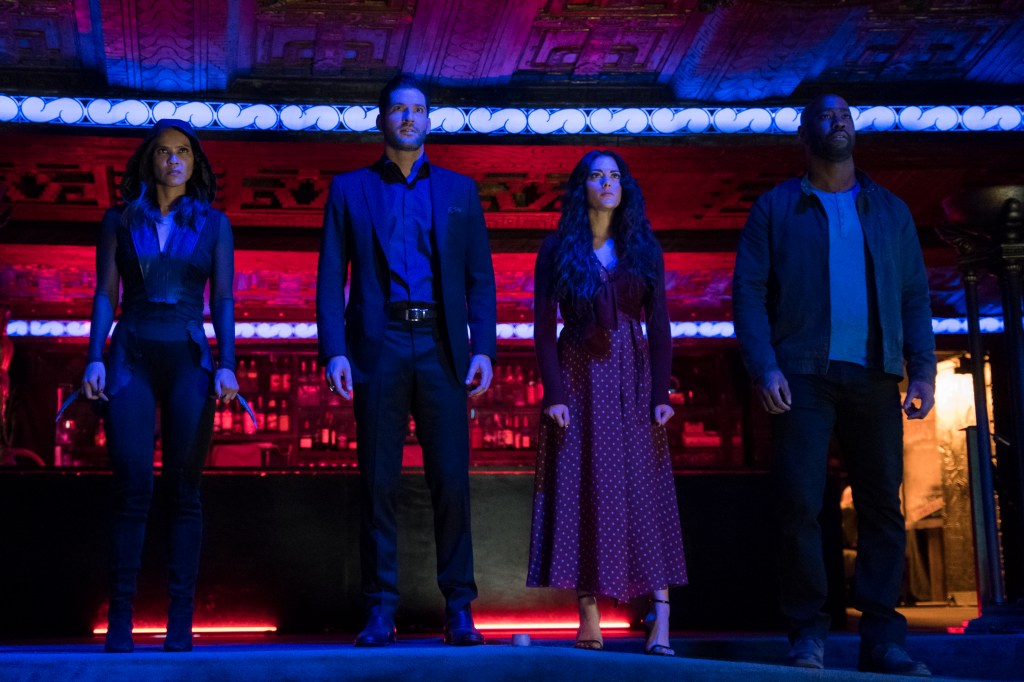 TVLINE | You got to kick all kinds of butt in the Season 4 finale. Was that far and away the most stunt work you’ve gotten to do thus far?
It was a lot, but that scene was split between my stunt guy and I, because that was a really crazy night and we were running out of time. The last episode is usually a little crazed because it’s usually the biggest episode with the biggest action, the biggest drama, the biggest fight scenes, and sometimes they have to push the actors out of the way and [just get things done]. But yeah, it was fantastic, and it’s no secret that Lesley-Ann [Brandt] and I love fight scenes. We’re always asking for more. I think the two of us would fight every single episode, if they allowed us to.

TVLINE | That’s exactly what Lesley-Ann told me on set — “If it was me, I’d be fighting everybody. But that’s a different show.”
Yes. All the time. [Laughs] But yeah, definitely a different show!