As The Voice’s Top 8 headed for the stage Monday night, I couldn’t help but think what a weird, weird finale we seemed to be headed for. Not only was Adam Levine’s entire team out of the competition (poor Mari), but Blake Shelton’s team was still five members strong. Now I’m no math whiz, but that suggested to me that it was going to be almost impossible for him to lose Season 16. He basically had five lottery tickets to Adam’s zero, Kelly Clarkson’s one and John Legend’s two.

On the other hand, if Blake’s posse of country boys split the vote, it could open the door for a win by Team Legend’s Maelyn Jarmon, who I think we can all agree is, hands down, the best singer in the competition. By the same token, if John’s fans’ votes are split between Maelyn and showman Shawn Sounds, that could boost Team Kelly’s lone member, Rod Stokes. But, awesome as he is, he still seems like a long shot to me. (Hope he makes the finals, though — he’s been on fire!)

Of course, I was getting ahead of myself and of the contest. First, we had in store Monday’s performances, a combo platter of solo covers and Beatles duets. Which of the semifinalists sounded especially fab? Read on… 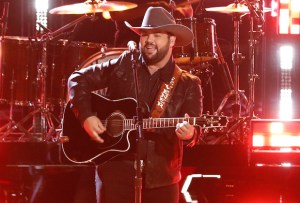 Andrew Sevener (Team Blake), “Long-Haired Country Boy” — Grade: B | In rehearsal, Blake warned Andrew that “there’s no room to be too laid-back” on his cover of the Cody Johnson version of the Charlie Daniels song. We wanted to hear Andrew wail, his coach told him. Sounded good to me. On stage, Andrew started strong, filling his voice with that gravel that I (and I don’t think only I) am a sucker for. At times, I wanted him to go further, strain harder — it felt like there was room for more howl, more growl throughout the number than he was giving us. It was good, don’t get me wrong. It just wasn’t the kind of thrilling, bring-the-house-down showstopper Andrew needed to advance to the Finals.

Shawn Sounds (Team Legend) and Kim Cherry (Team Blake), “Eleanor Rigby” — Shawn’s grade: C, Kim’s grade: B- | “This song makes me think about sadness,” said Shawn pre-performance. It was like being surrounded by a lot of people, but it’s still lonely if they don’t see you, added Kim. So, that was cheerful. Happy Monday, everybody! When they took to the stage, the duo started off a bit pitchy, but then Shawn started singing by himself, and things improved. He was still a little off — this definitely wasn’t his strongest performance ever — but there was a smokiness to his voice that was appealing. Kim was uneven, too, but especially when she sorta snarled here and there, she gave off Teena Marie vibes that were pretty irresistible. 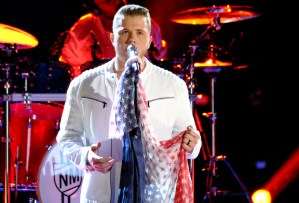 Gyth Rigdon (Team Blake), “God Bless the USA” — Grade: C | “I just think it’s something to bring everybody together,” said Gyth of the Lee Greenwood anthem he chose to cover. “I just think it’s a way for you to play the God card and the patriotic card at the same time to get yourself into the finals,” I wanted to reply despite the fact that I knew it made me sound incredibly cynical. Anyway, Gyth acquitted himself all right at first, singing the verses with a hint of vulnerable vibrato that really worked. But he let himself down on the rousing choruses. His voice just wasn’t massive enough to go as big as he or the song wanted it to, and because of that, he veered into big-time pitchiness. Even Kelly and John admitted that this hadn’t been their favorite Gyth vocal.

Kim Cherry (Team Blake), “Together Again” — Grade: C+ | In rehearsal, Kim explained that she wanted to cover this Janet Jackson number not only as a way of accepting Kelly’s challenge to show that she’s “a singer first,” a rapper second, but to pay tribute to the person who’d been her biggest supporter, her late mom. On stage, the emotion Kim was feeling was written all over her face — and more importantly, evident in her voice. There was also a theatrical element to her delivery that I dug. But when the beat kicked in, she went sorta flat, especially at first, and only really dazzled during the moments where she cut loose and wailed. A fine, fun performance but not earth-shattering — and definitely not a guaranteed ticket to the Finals. 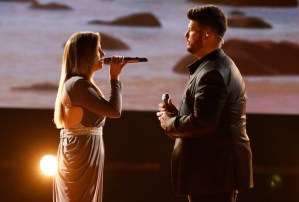 Maelyn Jarmon (Team Legend) and Rod Stokes (Team Kelly), “Yesterday” — Maelyn’s grade: B+, Rod’s grade: B | “‘Yesterday’ makes me feel longing,” said Rod before he and Maelyn hit the stage. I certainly longed to hear them sing their Beatles classic. And holy moly, when they did, Maelyn started off performing with a polish that just blew my mind (even though by now I should be used to that from her). Rod offered marvelous contrast, serving a sandpapery vocal full of feeling. Truth be told, I think I’d have preferred to hear either of them sing this separately; they only really came together in an ideal way a couple of times, when Maelyn sang little ad libs under Rod. She was good, he was good, but the sum wasn’t as great as the parts.

Carter Lloyd Horne (Team Blake), “Take Me to Church” — Grade: F | Carter explained in rehearsal that he’d read a lot of comments saying that he should tackle Hozier’s hit. I wasn’t sure, based on what I heard during his practice session, that he should’ve listened. “You’ve gotta mop the floor with this song,” Blake warned him. Eesh. His coach should’ve given him a mop and a bucket, because poor Carter hit the stage with enough pitch problems for three singers. (Kelly, John and even Blake noted it afterwards — and you know how rare criticism is on this show.) What’s more, there was a muted quality to his performance, like he was going through the motions, not the emotions. I just wanted it to be over way before it was, which struck me as an extra big bummer since Carter had been one of my early faves this season. Damn, did this number go on for 20 minutes, or did it just feel that way? 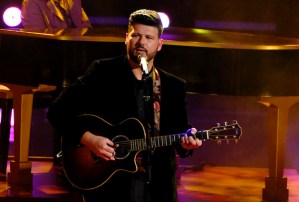 Rod Stokes (Team Kelly), “Go Rest High On That Mountain” — Grade: B- | Pre-show, Rod suggested that this Vince Gill classic would let him show more emotion than he ever had on the show, since he’d previously sung it at his grandparents’ funerals. When he stepped up to the mic, he performed with an openness that at first called to mind Willie Nelson on “Always On My Mind.” And unlike Gyth, whose voice hadn’t been big enough to expand and fill the notes he’d gone for, Rod had no such problem. His vocal was massive enough to reach to top of that mountain without him ever breaking a sweat. Afterwards, John dinged Rod for technical inaccuracy, which maybe I’d overlooked because I was swept up in the bigness of it all. Blake, too, admitted that Rod had been off here and there, but insisted that he’d take emotion over precision any day. I suspected we all would, and that Rod might actually make it all the way to the Finals.

Gyth Rigdon (Team Blake) and Dexter Roberts (Team Blake), “Hey Jude” — Gyth’s grade: C, Dexter’s grade: B- | OK, this was weird: Team Blake’s country boys performed their Beatles cover on stage in what looked at first like a recording studio — with an engineer and folks hanging around like they were part of the session. Was this setup part of a movie that I haven’t seen? Did it have some hidden meaning? Or was it just a random choice that proved more distracting than it could have been intended to be? In any case, the guys’ duet was mostly a noisy mess. Gyth sounded like he was trying too hard to match Dexter’s bigger, richer voice but mostly came off like he was yelling. Dexter fared better, if not much, owing to the fact that he’s a more seasoned performer who can punch his way through a wall of sound.

The Voice: The Singers Likeliest to Win Are…

Maelyn Jarmon (Team Legend), “Stay” — Grade: A | In rehearsal, Maelyn thanked her coach for picking this Rihanna hit for her. It was about her relationship with her career in her mind, she said. When she took her place in the spotlight… I mean, what can I say at this point? Maelyn knocks it out of the park every time. Here, she reminded me a little of Florence + the Machine; there was a rawness to her vocals now and then that lent urgency to her performance. Beyond that, she sang with power, passion and precision in equal measure, doing things with her incredible voice that no singer this season could come close to. As much as I hated to agree with Adam (ever, about anything), I had no choice but to agree when he said, “You definitely should win The Voice.”

Andrew Sevener (Team Blake) and Carter Lloyd Horne (Team Blake), “Help” — Andrew’s grade: C, Carter’s grade: D | Aw, gee. When the fellas announced that they were doing “Help,” I had a terrible flashback to Jacob Maxwell and Talon Cardon’s Battles duet to “Every Little Thing She Does Is Magic.” (Yes, it still gives me nightmares.) This wasn’t that bad, but er, it wasn’t good, either. Carter continued to play Where’s Waldo? with the song key in the role of Waldo. Andrew sounded better, but that wasn’t saying much. This gelled about as much as a bowl of Jell-O that you forgot to put in the fridge after cooking it. Sloppy, low-energy… blech. 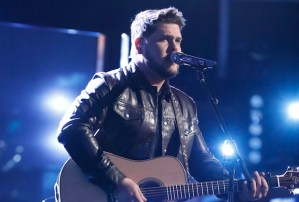 Dexter Roberts (Team Blake), “Here Without You” — Grade: A- | In rehearsal, Blake wondered about why Dexter had decided to go rock after being country throughout the competition. His answer: He wanted to prove that he was different. Well, kinda different — Dexter still sounded pretty country; with that twang, he really can’t help it. But he also sounded pretty tremendous. The stripped-down arrangement of the 3 Doors Down hit he tackled gave us a banner opportunity to sit back and just listen to this guy with total control of his voice rip through the song like an ache would through a heart. (This was the kind of a “Wow!” of a performance that Andrew had really needed.) By the time Dexter was through, it seemed to me that his spot in the Finals was as secure as my spot on this couch.

Shawn Sounds (Team Legend), “A Song for You” — Grade: A | Shawn noted before his performance that a lot of singers stayed away from Donny Hathaway numbers because of his big voice. Obviously, that wouldn’t intimidate Shawn, who dedicated his rendition to the kids at the middle school where he taught. On stage, his voice all but danced across the melody during the faster parts of the verse. And his runs were so pretty and free, they reminded me of flags fluttering in the breeze. In the song’s bigger moments, Shawn shone — of course he did. His voice doesn’t just grow to fill up a note, it expands to fill an auditorium. All that, and he ended on an extended falsetto note that had to be heard to be believed. If he’s not in the Finals, I’ll be rioting. Here on my sofa, but still… ! His coach even said that — sorry, Maelyn — Shawn had given the best performance of this week and last.

So, what do you think? Will it be a Team Blake victory? Could Maelyn win the title for Team Legend? And who do you suspect has sung their last song in the contest? Vote in the polls below, then hit the comments.