In the present timeline, a wounded Emiko has a change of heart and gives Oliver a warning: hide Felicity and the baby, or they will die. Following that — and the team’s successful plan to save Star City — Oliver and Felicity announce that they’re taking a step back and leaving town. Of course, they can’t tell their friends about the baby part of the plan. “When that threat is over…” Felicity reassures Oliver. “Until then, it’s the best thing for them and us.”

As the two shut off the lights in the bunker, Felicity says, “Goodbye, old friend.” Then Dig takes the couple to their new home in Bloomfield, a neighborhood full of ex-DIA and A.R.G.U.S. agents, so they’ll be nice and safe. “This isn’t a tropical paradise, but we never did take our honeymoon,” Oliver notes as a montage begins of the couple sitting on the porch, enjoying quality time with their daughter and more “Aww”-inducing moments.

But just as Oliver and Felicity are talking about asking for shared custody of William, The Monitor — you know, the guy behind the “Elseworlds” crossover — shows up to collect on the deal Oliver made to save Kara and Barry. “So what bargain did I make? What does the multiverse require?” Oliver asks, to which The Monitor replies, “You assist me as we seek to prevent the inevitable.” The Monitor has also seen the archer’s death during the Crisis, and he can’t stop it, but Oliver can save countless lives and the entire universe if he goes with The Monitor.

Oliver and Felicity say a teary goodbye, with Oliver asking Felicity to keep their kids safe, and Felicity pledging that she will find him again. “We are the best parts of each other, and that is so much bigger than the freaking universe,” she declares, after which Oliver echoes the words she said to him in Nanda Parbat, about opening up her heart in ways she didn’t think were possible.

Meanwhile, after also saving the city in the future, Felicity meets with William and Mia at Oliver’s headstone (Year of Death, for what it’s worth: 2019) to say goodbye one last time. Her kids no longer need her protection, she notes. So she makes them promise to take care of each other and explains that it’s time for her to go on her own journey. Felicity then meets up with The Monitor, who warns her that there is no returning from where they’re going. “I have waited a very long time to see him. I’m ready,” she says before they walk into a blue portal.

The episode’s other big events and takeaways: 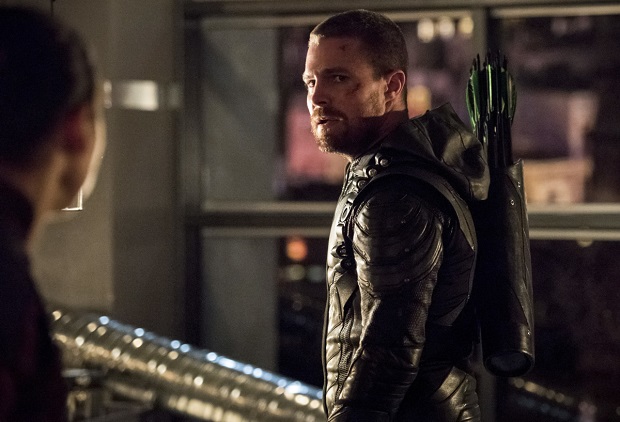 * After Oliver protects her when the fed-up Ninth Circle attacks them both, Emiko changes her tune and apologizes to her brother (and gives him that all-important head’s up). The family reconciliation ends with Emiko dying just before all of Palmer Tech explodes.

* In the future, the team successfully thwarts Galaxy One’s plan to exterminate a big chunk of the city, and Mia and William manage to blow up the wall. As a result, the city will need heroes more than ever — and it has them in Mia, William, Connor and Zoe. (On a possibly related note, The Monitor says the world needs Mia.) As for Felicity, Roy and Dinah, they’re fugitives and need to go into hiding again.

* OTA gets two lovely scenes: In the first, Dig tells Oliver that his cycle is not one of violence, but of heroes fighting to save the city. Later at their new home, Felicity and Oliver assure Dig that he is also a part of their family.

* We get our first hint of how Connor will eventually end up with the Diggles as Bronze Tiger joins the team. When Emiko threatens the city with the biological weapon, Dig assures Bronze Tiger that they will get Connor to a safe A.R.G.U.S. site along with the rest of the kids. Dig also suggests a possible job at A.R.G.U.S. for the baddie-turned-hero, who says he just wants to spend time with his son.

* Roy on how he got on the island: “It’s a long story.” But I need to know now! Until then, he’s going to search for a way to atone for killing.

* Curtis returns to help out, and announces that he’s going to propose to Nick.

Arrow fans, what did you think of Felicity’s goodbye? Grade the season ender via the poll below, then hit the comments!