Veep wrapped up its seven-season run on Sunday by installing a new person in the Oval Office — but was it a woman who’s already been there before?

We start at the convention, where no candidate — Selina included — receives the delegates necessary to secure the nomination outright. Selina hits the ground running to drum up delegates on the second ballot, refusing to take on Kemi as her running mate and laughing off Amy’s offer of a shared ticket with Jonah.  But when she accidentally breaks North Carolina’s transgender bathroom ban by ducking into the wrong door, that drives the crackpot Governor Calhoun into the arms of Kemi… which forces Selina to come crawling back to Amy to beg for Jonah’s delegates. 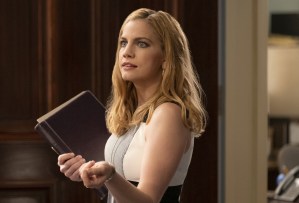 Amy just cackles, though: A NYC airport terrorist scare has been pinned on a Muslim math buff, which plays right into Jonah’s hatred of Arabic numerals. He’s on the rise! (He even gets denounced by the ACLU.) Jonah starts racking up delegates, with Uncle Jeff barking four-letter insults at holdouts to get them in line. Meanwhile, Kemi pushes for a new federal investigation into the Meyer Fund, and suddenly, Selina is bleeding delegates left and right. Things gets so dire, Ben has a heart attack… and Tom James even jumps back into the race!

Tom is poised to take the nomination on the second ballot, and he happily informs Selina that he’s offering her absolutely nothing in his future administration. An ailing Ben thinks this might be his last campaign, and tells a weeping Selina that she knows what she has to do next. (“Don’t tell my wife and kids” about the health scare, he adds. “I could really use the break.” Selina’s fine with that: “Never met ’em.”) She then confronts Tom’s chief of staff about their affair and props her up in front of the press, exposing the affair to the world and sinking his campaign. After Tom angrily chews her out, Selina turns to her delegates: “So emotional, right? This is why we need a woman in office.” 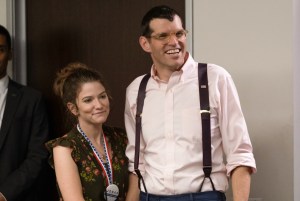 She scores Calhoun’s support by vowing to outlaw same-sex marriage, and swallows her pride to offer Jonah the VP slot. Kent — and even Amy! — try to warn her against it, since Jonah is such a reprehensible loose cannon, but she assures them being the vice-president is a useless position, “a fate worse than death.” (And she should know!) At first, Jonah insists on “President or nothing,” but after a verbal drubbing by Uncle Jeff, he gives in. He does have one condition, though: She has to make Richard — now the governor of Iowa, remember — her Secretary of Agriculture.

With the nomination now in the bag, Selina prepares to deliver the convention speech she’s been waiting her whole life to deliver — and gives Gary a big hug before she strides out on stage, calling him a “life-saver.” Yeah, that’s because she’s set him up to take the fall for the Meyer Fund debacle, and he gets hauled away by the feds while she addresses her adoring crowd.

Six months later, in the White House: Sue is back! Jonah asks her for time with the Prez, and gets the same cold shoulder Selina used to get. Yes, Selina won the election, and she has Tom’s chief of staff and Keith Quinn at her side, but she misses having Gary around to fetch her sandwiches. She made it to the Oval Office — but she’s all alone. And then 24 years later: We flash-forward to Selina’s funeral (Mike is now the CBS anchor!), with her former rivals paying their final respects. Jonah got impeached, and is sulking at home. Catherine and Marjorie celebrate with margaritas, along with their now-grown son. And Richard is now President! (He won the Nobel Peace Prize, too!) Gary stops by to pay his final respects, too, and Mike interrupts his coverage of the funeral to announce the breaking news… of Tom Hanks’ death. Poor Selina — upstaged one last time.

Alright, Veep fans, it’s your turn: Give the finale a grade in our poll, and then hit the comments to share your thoughts.