It will take some fancy, literal footwork for Legends of Tomorrow‘s Sara and Ava to reclaim control of the Time Bureau, now that it is under siege by Neron and his lady love Tabitha aka the Fairy Godmother.

In this Monday’s episode (The CW, 8/7c), “Jes [Macallan] and I tap dance,” Legends frontwoman Caity Lotz shared during a visit to TVLine’s New York office. And though Lotz is well known for her sick moves, “I am not a tap dancer,” she laments. “I did it in, like, sixth grade and I hated it.” But then again, the show Sara and Ava will put on “isn’t supposed to be great tap dancing.” So there’s that.

This actually marks the second time this season that Lotz and Macallan have been called upon to dance in a style not in the former’s repertoire. “I never do dancing I’m good at! I don’t do tango, I don’t do tap….. They’ll probably have me do ballet next,” Lotz laughs. “But if it was like a hip-hop dance, I’d be like, ‘Step aside….'”

Elsewhere in this season’s penultimate hour: Constantine has just sent himself to Hell, where he will face quite the conundrum — save Ray Palmer, whom the demon Neron is now using as a host, or someone else very close to him. Neron, meanwhile, will as Ray pimp some tech that is poised to damn humanity more than, say, the iPhone. “You know how you don’t read the contract [for new apps]? Everyone always just clicks ACCEPT?” asks Lotz. Well, with what Neron has planned, “You just signed soul over to the devil, boom!”

As this season’s final two episodes play out, Lotz affirms that the dragon egg to which Zari has been tending “does come into play,” and there may a kind of switcheroo on tap when it comes to one of the magical creatures the Legends have been dealing with. 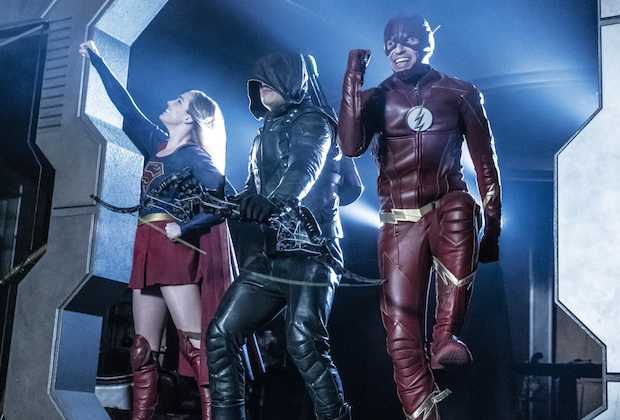 The May 20 finale itself, meanwhile, finds the Legends dressing up as Supergirl, Green Arrow and The Flash, in the name of getting the public’s attention. “If we made the commercial as us, people would be like, ‘Who’s White Canary and Captain Steel?” notes Lotz. “People need the franchiseable superheroes to get them in the door.”

There is also another “performance” ahead for Lotz, one that presented a blast from the past of sorts. “I used to work at SeaWorld when I was, like, 16, dancing in shows…,” she shares, rolling her eyes. “It really reminded me of that.”

Lastly, Lotz confirms that which Legends EP Phil Klemmer revealed during May Sweeps Preview — that the finale will not just hint but practically announce a change for the Waverider crew ahead of Season 5.

“There will be one thing, with one person where you’ll go, ‘Wait, what?” she teases. “What’s going to happen??”