THE PERFORMANCE | Fosse/Verdon‘s Gwen Verdon is as great an actress off-stage as she is on it, putting on a brave face and an unshakeable smile no matter what life throws at her. This week, though, she finally reached her breaking point, and Williams — who’s been stellar all season long — topped herself with a heartbreaking, emotionally raw performance.

Gwen had a lot on her mind as she joined her ex Bob for a weekend in the Hamptons: Her best friend Joan had just died, Bob was showing off a new (and much younger) girlfriend, and Gwen was still clinging to the dream of doing Chicago with Bob in their favorite old theater. At first, Gwen was all smiles, but Williams let us see the pain and desperation peeking out around the edges. Once Gwen got a few drinks in her, she pitched her vision for Chicago a little too loudly, and it was almost hard to watch how nakedly needy she was to get Bob to say yes. When Bob finally said no, the claws came out, and Williams was absolutely vicious as Gwen detailed to Bob’s new girlfriend exactly what kind of disappointment she can expect from her new man.

When a devastated Gwen later sang a sad ballad, Williams’ voice was strong, but also laced with vulnerability. And she even found time for a chilling coda, with Gwen admitting a harsh truth: that she values the acting roles Bob gave her just as much as the daughter he gave her. Gwen Verdon is too complex a character to pin down as just one thing, you see — and Williams has masterfully shown us every last shade.

THE PERFORMANCE | Although the big question going into Season 4 was about Chloe’s reaction to Lucifer’s true face, little did we suspect that the more powerful material would be born of the finer details — namely, the realization that she is and has been the mighty Devil’s kryptonite.

Yes, Episode 2 gave German a chance to play Chloe’s general curiosity — peppering Lucifer with Qs such as, “Do you keep track [of your kills]? What’s it like in Hell? All those people you tortured, did you enjoy it?” But when he accidentally pricked his finger shortly after surviving an inferno, something raised the detective’s hackles.

“How is it that you walk away from a giant, fiery explosion without a scratch, and right now you are bleeding?!” she asked, German’s face registering both confusion and almost a fear of hearing the answer. Chloe then recalled the times Lucifer had been shot, once by her, yet sustained damage. “Is anything even real with you? Were you trying to make me feel bad? Is this all to make me care about you more?” Then, “How is it that sometimes you get hurt and other times you don’t? What is the difference?”

When Lucifer revealed, “I’m only vulnerable when close to you,” the expression on German’s face conveyed the weight of that connection clicking with Chloe.

Capping German’s performance was an equally intense sequence where a bad guy’s hatchet just barely missed her partner. “If I pushed this, into your chest, it would kill you? Because I’m close to you?” she observed while grazing Luci with the blade. “But you jumped in front of it anyway?” Lucifer avowed he would do so, again and again, while Chloe apologized for so much as nicking him. “I’m sorry,” she whispered — for the drawn blood but also her post-finale behaviors to date. 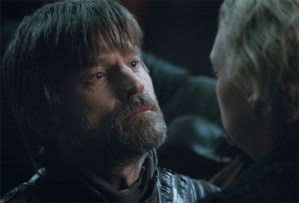 HONORABLE MENTION | Game of Thrones‘ Jaime Lannister hit a pothole on his road to redemption this week — but Nikolaj Coster-Waldau played the scene so wonderfully, we almost forgave his character for abandoning Brienne in the middle of the night. (Almost.) Upon learning that Daenerys & Co. planned to battle Cersei, Jaime chose to flee Winterfell and return to his sister in King’s Landing. “You think I’m a good man?” Jaime bitterly asked a tearful Brienne, before reminding her of the heinous acts he’s committed on Cersei’s behalf. With every syllable that left Coster-Waldau’s mouth, he communicated Jaime’s regret, determination, self-loathing and sadness; there was so much conflict in his voice that even Jaime seemed unsure if he was making the right decision. And though it pained us to see Jaime ride off into the night, Coster-Waldau succeeded in bringing even more complexity to a fascinating character. 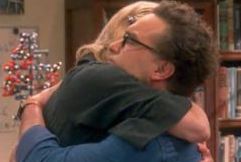 HONORABLE MENTION | For nearly 12 seasons on The Big Bang Theory, we’ve watched Leonard’s ice queen of a mother Beverly Hofstadter (the inimitable Christine Baranski) turn a cold shoulder to her son. And for nearly 12 seasons, we’ve watched as Leonard mostly tolerated her maternal indifference. But in this week’s episode — not coincidentally the third-to-last Big Bang ever — all of that pent up pain boiled over, and portrayer Johnny Galecki simply crushed every comedic and dramatic beat of Leonard’s emotional catharsis. When in the episode’s closing minutes Bev extended an olive branch to her son in the form of a genuine hug, Galecki literally rose to the occasion as Leonard sprang to his feet and wrapped his arms around his mother for what felt like the first time. It was the closure he — and more importantly we — needed. 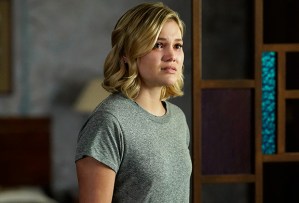 HONORABLE MENTION | Thursday’s episode of Marvel’s Cloak & Dagger practically served as a second origin story for Tandy Bowen, who began the hour as a powerless prisoner and finished it a fully-empowered beacon of hope — no matter how many walls she had to literally knock down to get there. From Tandy’s heartbreaking interactions with her fellow captives to her desperate attempts to claw her way out from the darkness, Olivia Holt‘s powerful performance further solidified her as one of the MCU’s shining stars. In the end, there was something so satisfying about watching Holt unleash her rage on the motel, taking down any man foolish enough to stand in her way. Come on, a trained ballerina who weaponizes the power of hope to cut down her patriarchal oppressors? It doesn’t get much more badass than that.