In Mom‘s Season 6 finale, Bonnie and Adam get married not once, but twice.

The first wedding takes place in Nevada. The couple is on their way to Reno to pick up a vintage jukebox for the bar when Adam brings up their long-delayed nuptials. “We postponed the wedding because the bar was struggling,” he says. But now it’s not. “My point is, there’s no reason not to set a date — unless you have a reason.” Bonnie says she’ll absolutely marry Adam “at some point,” but “some point” isn’t good enough for him. When she clarifies that she’d marry him “any time, any place,” he calls her bluff. They pull into the nearest quickie chapel and tie the knot. 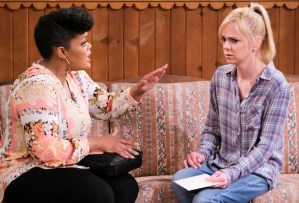 Bonnie and Adam’s impromptu wedding coincides with Christy’s sobriety birthday. At Alcoholics Anonymous, Wendy asks Christy if she’ll be taking a sobriety cake, but Christy wants to hold off until Bonnie is back to mark the occasion. Moments later, Nora (recurring guest star Yvette Nicole Brown) walks in and tells Christy that she can no longer be her sponsor. She’s moving to Minneapolis to be the new Channel 5 meteorologist for the Land of 10,000 Lakes — “and a teeny tiny part of Canada.” Christy wants to be happy for Nora, but she’s so much better at feeling sad for herself.

After the meeting, the gals head back to Christy’s apartment for lunch. Christy is too hung up on Nora’s departure to focus on her sobriety milestone, at which point Majorie chimes in with some words of wisdom. “It’s OK to be upset, just don’t rain on someone else’s parade,” she says. “You’ve gotta act better than you feel.” That advice is put to the ultimate test when Bonnie and Adam walk in and reveal they just got hitched.

Christy is angry that she wasn’t there for Bonnie’s wedding. (“She told me I was going to be the one to give her away,” she says. “Do you know how long I’ve been waiting to give her away?!”) In fact, all of the women are perturbed; Jill had already purchased a dress, Tammy had hoped to shove cake in Adam’s face, and “Mad Marge” was determined to be a bridesmaid. Out of spite, they all agree to go in on the world’s cheapest belated wedding gift: a pack of chip clips! Meanwhile, at the next AA meeting, Christy lashes out at an oblivious Bonnie during her share. It isn’t until later that night that she finally comes forward and tells Mom how she feels.

“The truth is, I’m really hurt,” Christy says. “We have been through such horrible stuff together, and finally something wonderful happened and you didn’t let me be a part of it… Strange as it may seem, people want to be a part of your life because they love you.” Bonnie apologizes to her daughter, and promises to invite her to her next wedding. Little does she know that her next nuptials will take place the following afternoon. Once Bonnie tells Adam how upset everyone is about their initial walk down the aisle, Adam suggests that they have a second ceremony down at the bar. Majorie officiates, Wendy plays the recorder, and Christy gets to give her mother away. 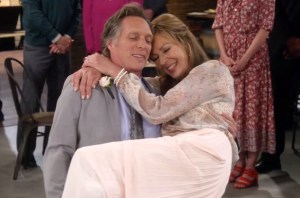 As the episode draws to a close, everyone gathers around to watch Adam and Bonnie share their first dance as husband and wife. For once, Christy is genuinely happy. She turns to Marjorie and thanks her for the role she’s played in her sobriety. Then, before she can ask, Marjorie agrees to step in for Nora and become Christy’s sponsor again.

What did you think of the Mom finale? Grade it via the following poll, then hit the comments with your reactions.