Less than two months remain until Myfanwy Thomas’ life is plunged into chaos.

Starz announced Wednesday that its supernatural thriller The Rook will premiere on Sunday, June 30 at 8/7c. Based on Daniel O’Malley’s 2012 novel, the series stars Emma Greenwell (Shameless) as Myfanwy Thomas, a woman who wakes up in the rain beside London’s Millennium Bridge with no memory of who she is and no way to explain the circle of dead bodies around her.

After discovering she is a high-ranking official in the Checquy, Britain’s last truly secret service for people with paranormal abilities, Myfanwy “will have to navigate the dangerous and complex world of the agency to uncover who wiped her memory — and why she is a target,” the logline reads.

In addition to announcing the premiere date, Starz has released a teaser trailer for The Rook (embedded above), as well as an official poster. In the minute-long trailer, Myfanwy learns more about her “extreme abilities” and quickly realizes that no one at the Checquy can be trusted.

Watch The Rook‘s teaser trailer above, then scroll down for a glimpse at the show’s poster and tell us if you plan to tune in. 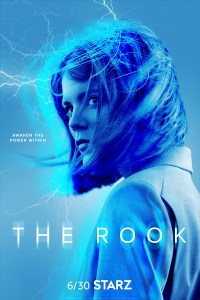