When is ketchup not just ketchup? The answer, Single Parents Season 1 finale revealed, is when it’s used as a metaphor in one of the most impassioned rants about parenthood that we’ve heard in ages. But was the speech enough to move one of the comedy’s meant-to-be couples out of the friend zone? Read on and find out… 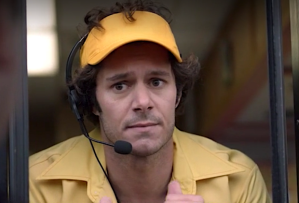 ‘I KNOW YOU MET HIM; STOP NAME-DROPPING LANCE BASS!’ | As “Ketchup” began, Angie was so freaked out about being separated from Graham that even Will’s suggestion that they go on a booze cruise couldn’t convince her that she shouldn’t drag her son home from space camp. That being the case, he’d drive her. Which was good, “’cause I am out of gas,” Angie admitted. “Like all-the-way out.” On the road, Will got his pal to admit that OK, fine, maybe she had abandonment issues. But why shouldn’t she when everyone leaves — grandparents, pets, “every teacher at the end of the school year, gone like it meant nothing… every pen I’ve ever owned… ” Graham’s father… Aha! Sure that he’d gotten to the root of Angie’s problem, he got her to tell him about her summer touring with “the sexiest man I had ever seen” — Derek (Leighton Meester’s real-life husband, O.C. vet Adam Brody). He’d even seemed excited about the prospect of becoming a dad, yet “next thing I knew, he left me at a bus stop in Sacramento.” So fine, she had abandonment issues. “But I got a bus thing, too.” Believe it or not, the story got worse. Derek had never even tried to meet Graham, though he lives only a couple of hours away. “It’s like fire up an audio book and do the right thing, you hot doofus!” cried Angie.

Suddenly, Will had a brilliant, terrible idea: They should forget all about space camp and track down Derek so that Angie could give him a piece of her mind. “I’m gonna use all the cuss words!” she declared. She was even going to invent a few new ones, like… um… shoehead? Alas, once they pulled into the drive-thru of Ratso’s Burgers, Burritos & Teriyaki (ugh!), Angie lost her nerve. Since cars had pulled in behind them, Will couldn’t back out, either — they’d have to pass Derek at the window! While Angie hid in the backseat, she had Will order enough food to cater the show’s wrap party. When he was finally face to handsome face with Derek, Will went off on him for forgetting the ketchup — meaning his responsibilities as a father. Derek had made the fries — meaning Graham — and then hadn’t provided ketchup. But the fry is still amazing, Will yelled, because the salt — meaning Angie — is awesome! Before the confrontation with a bewildered Derek was through, Will got physical and smushed Graham’s dad’s face against the car window… pretty much forcing him and Angie to see one another. Derek was eager to talk to his old flame, but she wasn’t ready, so she and Will left with her babydaddy’s email on the shard of a demo CD Will had broken in half. 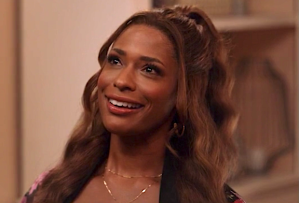 ‘I’M A VERY BUSY SINGLE DAD TRYING TO HAVE IT ALL’ | Meanwhile, Douglas was seething with jealousy over Poppy and Ron’s kiss when Miggy arrived with the twins. “I’m dealing with something here,” grumbled Douglas. “Can you come back in 10 years?” They could not and they would not — they had a business proposal in which they wanted the widower to invest: Beach Sneaks. The trio had a whole presentation to do, but “it’s a bag on a shoe,” said Douglas seconds after they began. “I get it.” And no way would he invest in the idiotic idea. Shortly, Poppy arrived to discuss what he’d witnessed the previous night and quickly tired of his obvious lies (that he hadn’t been in front of her place, that he’d only been there to return Rory’s blazer, Liza). So she accused him of being scared to tell her the truth about the way he felt — and added that that was a fear he didn’t share with Ron, who’d called off his wedding!

Later, Miggy returned to inform Douglas that he’d pitched Beach Sneaks to a real business genius, who’d bought in on the spot: Dwayne! He’d even gotten a website put up… that said Beach Sneaks by Dwayne. Dang it! “Only an idiot would trust Dwayne,” sighed Douglas. Before stomping out, Miggy said that he was tired of being called dumb. And even if he was ditsy, at least he led with his heart — when was the last time Douglas did that? Inspired, Douglas made a beeline for Poppy’s. She was done with Ron, she said. For good this time. She’d even told him to marry Sharon. Why? asked Douglas. Poppy’s smile did a nice job of answering that question. In return, he admitted that he hadn’t been outside her place because of Liza but because of “feelings.” Neither of them knew where they were going from there, but Poppy had to hurry over to the nuptials… which she was chagrined to be attending alone. Uh-uh. She wouldn’t be alone, Douglas said.

‘THANK YOU FOR HULKING OUT FOR ME’ | As the episode and the season neared their conclusions, Will and Angie chowed down on all that food he’d ordered while taking in the super romantic view from a hilltop. He wouldn’t have guessed that Derek would be her type. “I like… different things now,” she replied. Was Tracy his type? Well, yeah, he said. But he had “other types,” too. As the moment got more and more loaded with possibility, Angie thanked him for his sweet ketchup tirade. “What can I say? I care deeply about condiments… and you,” he admitted. And it looked for a hot second like they might kiss, but just when it would’ve happened… argh! Sophie Facetimed! Later, we joined Poppy and Douglas as they were about to enter Ron and Sharon’s wedding — and so did Will, Angie and Miggy! Douglas had told Poppy she wouldn’t have to go it alone! After Douglas showed Miggy that he’d bought him a website for all of his future sneaker designs — “You know my name isn’t Mickey, right?” (oops!) — he took Poppy’s hand, and into the ceremony they went. So, what did you think of the finale? Were you hoping Will and Angie would kiss? Too soon? Are you glad Douglas and Poppy got together? Hit the comments after you grade the episode below.