The good news? Lucifer returns with Season 4 this Wednesday, May 8. The bad news? You’re only getting 10 new episodes.

But worry not, because there is a lots more good news to be found in the Fox castaway’s resurrection via Netflix.

“It’s strange how quickly the whole experience happened this time,” series lead Tom Ellis expressed to TVLine during our visit to set, as they were filming the Season 4 finale. “We got so used to the marathon as opposed to the sprint!”

Hailing the shorter burst of episodes, “Honestly, I believe that this format is much better for the show,” Ellis said. “When you’re doing 22 episodes, it’s difficult to keep your story taut for dramatic tension. You have to find ways to fill [time], basically. But this format means our story is distilled down in a way that every episode is much richer. It feels denser, and what’s at stake in every episode is much higher.”

And because all 10 episodes are being released on the same day via the usual Netflix model, “It will have that bingeability factor,” Ellis noted. “Ten episodes, people do that in a weekend these days!”

Though Netflix in recent months has taken a bit of heat for cancelling shows based on cold, hard (and secret) data, the fact is that those who make and star on streaming shows don’t see their dreams dashed on a weekly basis by fluctuating, potentially doomsaying numbers.

“There’s stuff about this business that has absolutely nothing to do with the craft of acting, and one of those things is worrying about what happens when you send your work out into the world,” noted Lesley-Ann Brandt, who plays Maze. 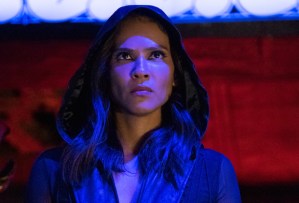 Working on a Netflix series “reminds me of what it was like to work on Spartacus,” the actress continued. “You shot 13 episodes and then you presented your baby and hopefully everyone thought it was cute and wanted to see more.” And by playing to and counting eyeballs well beyond the United States (including Brandt’s homeland of South Africa, “where we do really well”), “Netflix measures success in a very different way that is more representative of where audiences are at and how they ingest. Now people can watch it communally and all of those numbers will be counted together.”

Streaming on Netflix also means that Lucifer had at least the option to be a bit more true to its devilish subject matter, be it through what we hear and what we see.

Netflix was “very adamant that they didn’t want the show to change, because they believed that the show that everyone was expressing love for was the show they wanted to see,” Ellis said. “So whilst we were sort of tantalized by these new boundaries — or lack of boundaries — part of the charm of the show was we had to work around stuff even though the nature of the show was this evil, naughty character. It has always been more about suggestion, and that’s more fun.”

That said, “There are moments where certain characters are able to say what they want to say,” though Lucifer himself “is a bit more refined than that,” Ellis suggested. And as trotted out as early as Episode 1, “There is a bit more flesh, but not just because of the move to Netflix but because of the story.”

The story, as Season 4 plays out, will also head into thematically intense territory. As Rachael Harris, who plays Dr. Linda, teased, “It definitely gets darker, and that’s what we all like.” After citing the specific, frightful and spoilery way in which one of the new faces will threaten a fan favorite character — and upon seeing our reaction/jaw-drop — Harris stressed, “That’s how dark we get.”