FINAL EPISODE | Season 8, Episode 4, “The Last of the Starks” 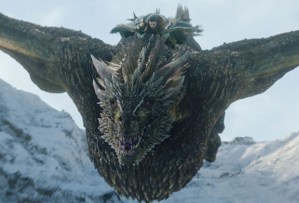 HIGH POINTS | Emerging from his egg, along with his brothers, after Khal Drogo’s funeral; burning Pyat Pree alive with the help of Drogon and Viserion; getting freed from the Meereen catacombs by Tyrion and ending the Second Siege; taking Jon Snow on his first dragon joyride.

LOW POINTS | Getting kidnapped and chained up at the House of the Undying; getting chained up again, this time by Daenerys, in the catacombs of Meereen; refusing to eat in Dany’s absence; watching brother Viserion die at the Night King’s hand; getting wounded during a fight with Frozen Viserion in the Battle of Winterfell.

CAUSE OF DEATH | Killed by a series of giant arrows fired off by Euron Greyjoy as Daenerys’ fleet approached Dragonstone.

EPITAPH | Though Rhaegal wasn’t in the spotlight quite as often as brother Drogon, he was an equally powerful (and relentlessly protective) creature who defended his mother — and Jon Snow — until the very end.

Now it’s your turn. Hit the comments with your favorite Rhaegal moments over the years, and then tell us which Game of Thrones character you fear/hope will fall next!