The only thing that surprised Supergirl actress Andrea Brooks about her character’s villainous reveal is how long it took for the truth to finally come out.

“I don’t want to say it’s been in talks since Day 1, but there were always jokes circulating on set,” Brooks tells TVLine of Eve Teschmacher embracing her dark side. “Writers would come up to me from time to time, telling me that there were possibilities, but it wasn’t until this season that they actually sat me down and told me the direction she was going in.”

(Brooks also suspects that Eve’s former boss — Cat Grant, played by Calista Flockhart — won’t be surprised when she eventually finds out that Eve was a plant. “Cat was never the biggest Eve fan,” she says. “Maybe she had an inkling all along.”)

As a life-long fan of the franchise, one who fondly recalls renting the Christopher Reeves Superman movies from Blockbuster with her mom, Brooks has “always been aware of who this character is and what she’s capable of,” she says. “Even though I was brought in under somewhat different circumstances [than the big-screen version of Eve], there was always that thought in the back of my mind.” 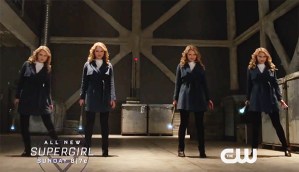 Eve returns “with a vengeance” to Sunday’s episode of Supergirl, and if you thought she put up a fight before, just wait until you see what she can do when there’s four of her, courtesy of a Harun-El injection. “Never in a million years did I think I’d be doing something like this,” Brooks says, calling Sunday’s hour the “most exciting episode” she got to film.

And it sounds like there are still a few secrets yet to be revealed about Eve, “who always has an endgame in mind,” Brooks says. “I wouldn’t say she’s a full-blown sociopath, not in the way that Lex would probably like her to be. She still has a heart, so she’s sometimes conflicted between what she has to do and how she feels about it.”

Were you surprised by Eve’s big reveal? And what are your hopes for the rest of Season 4? Drop a comment with all of your thoughts below.