Are you already missing the urban misadventures of Broad City? Are you also impatiently waiting for the new season of BoJack Horseman to arrive? Then I’ve got the perfect show for you. Tuca & Bertie — which debuts on Netflix this Friday; I’ve seen the first four episodes — is one of the year’s most pleasant TV surprises: a vibrantly colorful, delightfully surreal animated comedy that mashes up the best bits of those two shows with a playful, psychedelic edge. It’s kind of like if Broad City and BoJack Horseman hung out, dropped acid and giggled for a half-hour.

Like Broad City‘s Abbi and Ilana, Tuca and Bertie are a perfectly mismatched pair of best friends. Tuca the toucan, voiced by Tiffany Haddish, is the brash, loud-mouthed exhibitionist (she even shares Ilana’s love of twerking), while Bertie the songbird, voiced by Ali Wong, is the sensible, anxious introvert. They’re a classic duo: Tuca brings Bertie out of her shell (nest?), and Bertie keeps Tuca from flying off into the stratosphere. The series kicks off with Bertie moving in with her sweet-natured boyfriend Speckle (Steven Yeun), but former roomie Tuca lives just one floor up in the same building, so she’s always nearby to toss a little chaos into Bertie’s life. 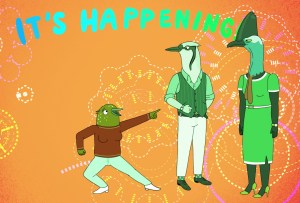 Tuca & Bertie is the brainchild of BoJack animator Lisa Hanawalt, who serves as creator and executive producer, and while the animation style might look familiar to BoJack fans, it’s taken to a fantastically trippy extreme here, with characters’ thoughts and words getting a bold visual accompaniment on screen. (It’s like they took Broad City‘s mind-bending “Mushrooms” animated episode and made a whole series out of it.) In the world of Tuca & Bertie, talking birds live and work alongside humanoid houseplants, and the subway trains are actually huge snakes and caterpillars slithering their way through underground tunnels. It can all be a bit dizzying at times, but the delirious creativity crammed into every frame is a joy to behold.

BoJack‘s love of blink-and-you’ll-miss-it visual gags and goofy puns is fully on display here as well. (Bertie works as a data processor at Condé Nest, hee hee.) Tuca & Bertie doesn’t get as deep as BoJack — it’s a lighter, more casual binge overall — and that’s fine, actually. We don’t need every comedy to be a bummer! But it still manages to be surprisingly emotional at times, as Tuca and Bertie face the monumental challenges of growing up and discovering who they really are. Both birds struggle with insecurity and self-doubt in their own way, but they help each other through it, and Haddish and Wong bring layers of warm humanity to their characters… even if they aren’t strictly, you know, human.

There are so many damn TV shows out there these days, and it feels like Tuca & Bertie is the kind of show that could get lost in the shuffle, or dismissed as mere eye candy for stoners. (Though it does fill that niche quite well, I’m sure.) But a series this outrageously inventive and purely fun demands your attention, even as hundreds of other shows clamor for it. I wasn’t planning on reviewing Tuca & Bertie, but I ended up liking it so much, I felt compelled to spread the gospel. All you Broad City and BoJack fans out there? Fly, don’t walk.

Tuca & Bertie is streaming now on Netflix — if you’ve seen it, grade it in our poll and hit the comments below to share your thoughts.