“I did not see that coming,” Alex remarked halfway through Thursday’s zippy Grey’s Anatomy. And I found myself saying the same thing over and over again, as the Link/Amelia/Owen/Teddy/Tom polygon took turn after turn, Jo’s downward spiral left someone besides her in tears, treating Station 19’s chief helped Maggie make a big decision about her future with Jackson, and finally, someone uttered to their significant other the three little words that are part and parcel of the Season of Love. Who was it? And did they get an “I love you” back? Read on… 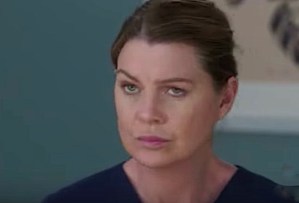 ‘I HALF EXPECTED TO FIND A HANDSOME ITALIAN RESIDENT BREWING US CAPUCCINOS THIS MORNING’ | After “What I Did for Love” opened with a cute scene at Meredith’s, during which Amelia noted that Grey looked happy — “Do I? That’s weird” — we cut to the Grey Sloan coffee cart, where Owen beat a hasty retreat after taking note of Link’s arm around his ex-wife. Inside the hospital, Jackson quipped to Maggie that yep, it was indeed “funny bumping into you where we both work every day.” Clearly, she was pulling another “We need milk” on him, putting off giving him an answer about moving in by insisting that she needed to talk to Mer first. OK, said Jackson. “You just let me know what she decides… about our life.” Shortly, we got to the big case of the week, a 4-year-old named Gabi, whose father Luis had come to the US on a visa, applied for asylum and gotten a job and apartment before bringing his family over. Only they’d nonetheless been detained at the border and “caged like animals.” Wife Dani was still there, it seemed. And though Luis was employed and paid taxes, he wasn’t yet able to afford insurance. “I’m not asking for something for nothing,” he told Alex. But the cost of Gabi’s treatment was a worry. After Mer was called in to consult and it was suggested that Luis apply for state insurance, which would kick in immediately, DeLuca reported that Gabi’s dad earned too much to qualify for it. “So he makes too much for insurance and not enough to get treatment?” marveled Mer. “That’s insane.”

Soon, the docs found that Gabi had a mass and would need an x-lap. “I don’t want you to worry about the money,” Mer told Luis. “It’s taken care of.” Her plan? Making smoke come out of Richard’s ears, she put daughter Ellis’ name down in place of Gabi’s as the patient! “I did not see that coming,” said Karev. Webber huffed and puffed, but Mer wouldn’t back down. “If you’d like to have me arrested when I’m done,” she told him, “that’s your call.” After the x-lap revealed that Gabi’s mass was cancerous, meaning she was looking at years of treatment, Richard yelled at Mer some more. She could lose her license and maybe her children! Wait, her children? “They don’t put your kids in jail with you, Meredith!” he hollered. “Unless you come here seeking asylum,” she shot back. Upset as Richard was, he still came up with a solution: Mer had to make Gabi appear so sick that they could keep her in the hospital for 30 days, which would cause the state policy to kick in automatically. So first he was mad that she’d lied. Now “you want us to lie more?” What of it, Mer? “So now you’re a Girl Scout?” he asked. Later, Grey thought DeLuca expected her to apologize for her stunt, but no. “You got me all wrong,” he said. “I’m in awe of what you did today.” In fact, he hadn’t spoken up sooner just because “I was afraid that if I opened my mouth, the only thing that was gonna come out was… I love you.” In response, Mer said… “Oh. Glad we cleared that up” and hurriedly walked away. 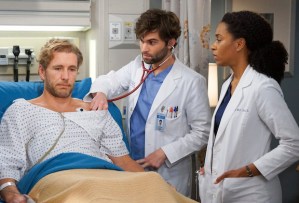 ‘IN REAL LIFE, IT IS ROMANTIC TO LET A PERSON BE HERSELF’ | Early on in the hour, Levi rode up in an ambulance with a John Doe who’d passed out in front of a flower shop. Of course, it wasn’t really a John Doe; Bailey soon recognized the man as, “Hey, you’re that guy from the spin-off!” — er, Ben’s boss’ boss. Once Ripley’s fellow firefighters arrived on the scene, they were extremely curious about why he’d have been at a florist. Was he seeing someone? No sooner had Levi reported that Ripley had been buying roses for a Vic than he feared he’d accidentally outed the fire chief. “My gaydar is not great,” he admitted. Though the first-responders were surprised to learn of Vic’s romance with the chief, it was no different, Owen told Ben, then Warren having been married to their chief, Bailey. Before Ripley was due to undergo fairly mundane but important surgery, he admitted to Maggie that Vic had proposed, and he’d said… nothing. That was why he was so eager to put off the operation, to get to his girlfriend and say yes. Well, “if you leave here, your heart could stop,” she told him. But if he stayed, his heart might… Thankfully, he caught himself before saying “break.” Ultimately, he agreed to be held hostage at the hospital if Maggie would go accept the “proposal” that she’d wanted to consider before accepting — which, she noted, didn’t mean that she loved Jackson any less than he loved her.

A deal with Ripley struck — or so Maggie thought — she sought out Jackson and told him, “The only correct answer was yes” to his suggestion that she move in. However, he hadn’t asked her the way, knowing her as he does, he should’ve. It would have been better if he’d suggested they weigh the pros and cons of cohabiting, allowing her to be the thoughtful, sensible scientist that she is. When he laughed that that wouldn’t have been very romantic, she communicated even more clearly (way to go, Mags!): “I love you, and I want to move in with you,” she said. The question was, “Can you love me for who I am, or are you always going to be disappointed when I’m me?” In response, he asked her to go camping with him — wait, what? — and he’d weigh the pros and cons of cohabiting with her till the cows came home. Er, “can we pro and con the camping?” she asked. Before the negotiation could go any further, Levi interrupted with Ripley’s pre-op labs: He was in far greater danger than had been originally believed. But by the time she got to his hospital room, he’d already taken off to find Vic. 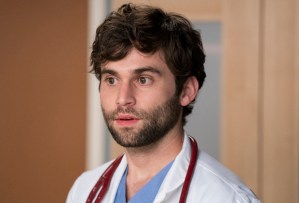 ‘HEY, BIRTH BUDDY’ | In other relationship news, with Teddy’s due date approaching at about the same speed as the season finale, Tom suggested that if the mom-to-be wanted, he could find a sub in Baltimore so that he wouldn’t have to be out of town for the birth. “Would that be weird if I stay?” he asked. To his delight almost as much as mine, she replied that no, that wouldn’t be weird at all. Which was good, because he’d already arranged it, “I just wanted to feel out your reaction” before admitting it. Later, since no home Teddy looked at could compare to her place in Germany, Koracick took it upon himself to find and rent her her dream apartment. He even presented his delighted girlfriend with the keys. Well, the keys to his file cabinet, anyway. He couldn’t pick up the real ones, so “I had to use a prop.” Elsewhere, Levi tried to elicit an apology from Nico but only got “I’m sorry I killed a guy, and you’re making it all about you.” #fail Later, Link strongly suggested that Levi give his boyfriend some space to process what he’d done. “That’s how you can be there for him. If you’re lucky,” Link added, “he’ll do the same when it happens to you.”

During a moment alone with Amelia, Owen started to ask about her and Link but got shut down hard and fast. “You and I are not a thing anymore,” she said, drawing a line in the sand. “You do not get to have an opinion on this.” But Hunt couldn’t quite let it drop. So later, he reminded her that he’d said she was incapable of love. However, having been through some therapy, “I think it was me that I was talking about, not you, and I’m sorry I said that. It’s the opposite of true.” Not only did Amelia accept his apology, she gazed after him as he left the room. Ruh-roh. Off that exchange, Owen was back in his therapist’s office. “Your weird voodoo’s working,” said Hunt, amazed. “I feel clear on what it is I want, and I don’t feel guilty that I’m gonna try to get it, and that’s some kind of a miracle.” So why, exactly, was he there? “I wanna feel perfectly clear when I tell her I love her,” said Owen, making it perfectly unclear whether it was Amelia or Teddy to whom he was going to make that declaration. (Although this episode certainly suggested that he was hoping the third time with Amelia would be the charm.)

‘YOU ARE A GOOD-LUCK CHARM’ | When not playing Legos with Gus, Jo got a call that was actually meant for Alex: There was another RH-null patient in Canada! Excitedly, she told Gus’ mom and Karev, and smiled for the first time since… since before Pittsburgh, right? Unfortunately, in her excitement, Jo had misunderstood entirely the reason for the call: The Canadian patient needed blood, he couldn’t donate it. Naturally, it was mere seconds later that Jo was sent reeling when she overheard Gus’ elated mom on the phone filling in his dad on the good news that was actually neither good nor news. “I screwed up,” Jo cried to Ben. Desperate, she pleaded with Teddy to break some rules, call in a favor, work some magic. But there was no magic to be worked. “You don’t seem quite OK,” observed Teddy, whose offer to lend an ear was rejected. Next thing we knew, Teddy showed up in Bailey’s office to discuss Jo… and found Ben already there doing exactly that. When Bailey and Alex arrived at Gus’ room, Jo was breaking the bad news to the boy and his tearful mom. For a second, it looked like Jo might keep it together, at least for the most part. But then Gus sweetly asked why he couldn’t give the Canadian patient some of his blood, and Jo collapsed, sobbing in Mom’s arms. Naturally, Alex’s frustration, already at 11, went through the roof. “I need to break something,” he told Bailey afterwards. And not the chief’s pencil cup, either.

So, what did you think of the episode? Will Mer say “I love you” to DeLuca by season’s end? It’s Amelia Owen is going to profess his love to, right? Or is Grey’s gonna pull a fast one on us? Hit the comments with your hopes/fears/theories.