SEAL Team showrunner John Glenn says that Petty Officer Lisa Davis entering and enduring OCS “was a really important story for me to tell, because I felt like we could do better for Davis as a character,” especially as the CBS series nears the end of its second season.

“This is a big cast and a very very big show, so if you want to step out and tell Lisa Davis’ story, that requires real-world resources — locations and crews and money that’s focused just on her story,” Glenn explained. “But I care about the character a lot, so I worked hard with my staff to figure out how to do it with the resources we have.”

As Davis’ OCS training winds down in this Wednesday’s episode (CBS, 10/9c), “It’s a really cool story and it will pay real dividends in Season 3” (if CBS grants a pickup), says Glenn. “It really expands her presence in the show.”

TVLine spoke with Davis’ portrayer, Toni Trucks, about tackling this storyline, getting yelled at at close range, and whether Sonny is more a Gere or a Winger.

TVLINE | What was your reaction to first finding out that you were getting this “Officer and a Gentleman storyline”?
TONI TRUCKS | I was really excited to hear that we were going to do “the Officer and a Gentleman storyline,” if we are going to call it that. [Laughs] I had spent so much time building this vibrant backstory for Davis anyways, so to get to actually show it is so wonderful. Also, we have spent so much time seeing Davis be good at everything — she’s super reliable, she’s excellent at her job, she can work above her paygrade at a moment’s notice if need be….

TVLINE | She’s Steady Eddie.
Right? She is like, “Count on me, lean on me,” but then when you go through OCS, I loved the notion of being able to see her start out failing and then get good, so we can see what her strengths are. Like, the book smarts? Fine. Physical stuff? Fine. But when it comes to those emotional hurdles, and knowing the real work that has to get done and seeing if she’s got what it takes in that sense, can she rise to the occasion? I think it’s so delicious when you’re able to root for a character in that way, when you’re like, “Oh, man, I’m uncomfortable with you being bad at something. So get back to being good!” That’s the real point of this journey.

TVLINE | Were you prepared to even simulate the physical stuff Davis was going to have to go through? Because when she was doing planks for, like, 30 minutes…? That looked rough.
It was really, really, really rough, but it was fun. I actually am a physical actor; I started out as a dancer and doing musical theater, so telling stories with my full body is something that I really crave, and I’m always happy to do anything physical that they ask me to do. But executing the fire stuff was really challenging in a way that I didn’t anticipate. I was happy to be able to do it, but I was also happy after 16 hours to have a stunt double backing me up. We’re really grateful for those people that you can link arms with when it gets 16 or 17 hours in, in a gas mask, and carrying an extra 50 pounds.

TVLINE | In order to graduate, will Davis have to share more about — and come to terms with — whatever it is in her past that made her pass out in the fire?
Exactly. It’s been really fun to watch the dialogue on social media about what people think she saw or didn’t see — or, you know, did she just inhale smoke, or why she passed out. There’s so many guesses about what that fire is triggering.

TVLINE | But is it going to end up being something specific?
Yes. You’re really going to be able to peel back that layer and we’ll know much more specifically about her hardwiring of some traumatic events, and a little bit more about her family dynamic. It’ll be a really revealing episode, and enlightening when it comes to the crucible.

TVLINE | Because when she collapsed, it just broke my heart. I was like, “Oh, s—t. This is a thing.”
Yeah. Yeah. Like, what is this thing? I think it’s interesting that the gunnery sergeant, that Tamala Jones plays so beautifully, has always sort of sniffed that out in her since the beginning, more so than even Davis does for herself. We all have our own stuff that we pack away, and the second the gunnery sergeant laid eyes on her she was like, “I don’t know. I’m onto you,” and she really is pushing the issue in a way that I don’t know Davis would have done on her own. 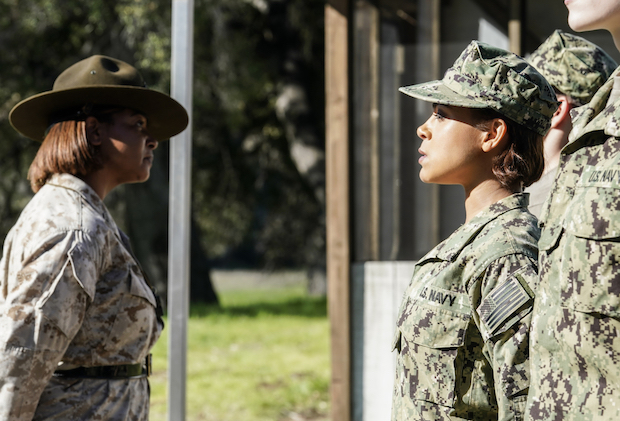 TVLINE | Let’s talk a little bit more about Gunnery Sergeant Miller because I covered Castle, so I know Tamala, and I’ve just been sitting here like, “This is the same actress?” Because she’s just going all in. Talk about the trust, or any talks the two of you had, before she first bellowed in your face from a half-inch away.
We were both so excited to do this and do this with each other. We were fast friends. Tamala, through some weird scheduling things, was asked to perform her first three-page monologue, yelling in my face, early. She was initially supposed to have the weekend to prepare, and then they’re like, “Oh, just kidding, you’re doing that tomorrow,” and it was her first day filming. I was really cheering her on, like, “More, more!” I was so honored to be on the other end of the yelling.

The funny thing is, when you have someone yelling in your face like that in boot camp or OCS, whatever the training may be, you’re not ever meant to look them in the eye. But Tamala and I are very similar in height, so even though there were times that I was like, “I’m looking at your forehead,” it would look like I was looking dead in her eyes. We kept trying to navigate, like, “How far up to the ceiling do I need to look to make it clear that I’m not disrespecting this woman who is going to slit my throat?” 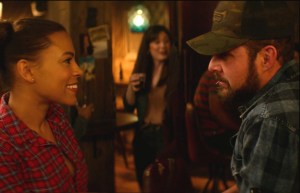 TVLINE | If Davis graduates, will we see her show up in her dress whites and carry Sonny away in her arms while music swells in the background?
[Laughs] Listen, if anyone is getting carried away, I would be carrying and Sonny would be in the baby cradle position.

TVLINE | John Glenn told me he very much has a plan to keep Davis in the mix, even as a “cake eater.”
I’m grateful that he does. Hopefully they’ll get a clever way to keep me around, because you know, as OCS, you normally don’t end up back with your team. You get assigned somewhere, if I end up passing. So hopefully John Glenn will work his magic.

TVLINE | Lastly, tell me about what kind of a season finale we can expect.
Oh, the finale…. This has been, for my money, such a beautifully heart-wrenching season. We’ve really delved so deep into each of the characters, which I guess is the luxury of having a second season. I think the finale is going to definitely leave some uncertainty about where we all are and where we’re all going, but also seeing how we can all really band together in tragedy.

TVLINE | John said it ends with a seven-minute, wordless montage that shows how far each character has come.
It does. It really does.… I’m at a loss at what else to share, because I don’t know what you know and I don’t want to ruin it for you!