The world may have literally gone to hell on Monday’s Shadowhunters, but even in the face of certain death, our favorites still found time for romance. Specifically, Alec and Magnus reunited against a burning backdrop and finally spoke the words they should have said weeks ago.

“You forgot something in New York,” Magnus said, handing over the family ring he received from Maryse after they figured out why Alec really broke things off. “Alexander Gideon Lightwood, will you marry me?” And Alec replied, “Only if you’ll marry me too.” Cue the big kiss, which I’m sure will already have been gif’d far and wide by the time this article is published.

“I think it’s a beautiful moment,” Harry Shum Jr. told TVLine during a visit to the show’s Toronto set. “I love that it happens when it’s least expected.”

Added Matthew Daddario, “Their entire relationship has been built around conflict and angst. This is something we could have done earlier or later, but it had to happen in the end, so I’m happy that it’s happening the way it is.” (He also promised, in the vaguest terms possible, a “little treat of something” that fans of the couple will “want to see” in next week’s series finale. Let the speculation begin!)

As for the behind-the-scenes of it all, Shum admitted that it was “a little crazy” filming such an emotional scene against a green screen. “You know where you are in your imagination, but it was an interesting place to have to film something so emotional. Usually you’re in a room, you’re in a space, and you get to pull from that. It was a big moment, but it was also kind of rushed because it needed to be. It was a dire situation!”

Other major developments this week…

* Though the Shadowhunters were able to untether Clary from her brother, doing so enabled Jonathan to reach his full potential, which he used to unlock hell and flood Alicante with demons. And when Jonathan finally realized that Clary would never love him like she loves Jace (gross, btw!), he destroyed the Morgenstern sword and peaced out.

* In spite of the above, Clary and Jace were also able to reaffirm their love for another under a blood red sky. (More like hellfire red, but you get the point.) 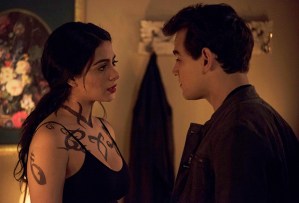 * And speaking of couples getting hot and heavy in what could be their final hours, Simon and Izzy nearly locked lips after reflecting on how they’ve both saved each other’s lives. Izzy pulled away at the last second, but there was plenty of lingering glances and backward turns to make this a legit “Sizzy” moment.

* After popping the question — and conveniently remembering a powerful ability he learned while in Edom — Magnus made tracks for the hellscape in a last-ditch effort to close the rift. Now all he has to do is make it back home without running into Asmodeus, whom he banished to eternal limbo earlier in the episode. Fingers crossed!

* Jordan gifted Maia with a vial of heavenly fire that he swiped from the Institute, and when she asked why he wasn’t going to use it on himself, he revealed that he was never actually cured of silver poisoning. “That’s why you need to take this and live a normal life for the both of us,” he told her — and before she even had time to plan out their final days together, he was gone. Of course she was devastated, but it looks like powering through that pain is giving Maia the strength she needs as her pack’s new alpha. All hail.

* Even with everything else going on this week, the show also managed to squeeze in a cute moment between Helen and Aline, who were totally just doing “research” when Alec found them together.

Your thoughts on Shadowhunters‘ penultimate hour? Your hopes for next week’s series finale? Whatever’s on your mind, drop it in a comment below.