Here’s the bad news: If you’re not one of Spectrum’s 14 million or so cable subscribers, you won’t be able to watch its first original series, the Bad Boys spinoff L.A.’s Finest. Or wait, actually, that might be the good news. Because L.A.’s Finest — premiering Monday, May 13 on Spectrum’s On Demand platform; I’ve seen the first three episodes — is a loud, dumb mess of a cop drama, loaded up with corny punchlines and incoherent plotting. So if you don’t have the ability to watch it… well, consider yourself lucky.

L.A.’s Finest started out as a NBC pilot, and frankly, it’s easy to see why they passed on it: It’s a clumsy attempt to recreate the Bad Boys magic on the small screen, with Gabrielle Union reprising her Bad Boys II role as former DEA agent Syd Burnett, now an LAPD homicide detective. Syd’s partner, played by Jessica Alba, is named Nancy, seemingly just for the groaningly obvious “Syd and Nancy” puns. These two characters come straight from the buddy-cop factory, exchanging quippy girl talk even during deadly gun battles. (“Don’t make me shoot you, because I’m not missing family book club!” Nancy yells at a gunman as bullets whiz past her head.) We’re supposed to cheer on the girl power of two kick-ass women starring in a cop drama, I guess — but is it really a victory for two women to star in a show that’s just as brainlessly macho as any male-driven version? 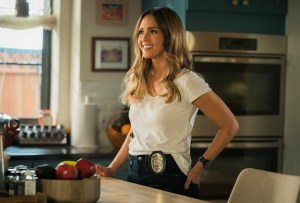 Executive producer Jerry Bruckheimer’s name has been synonymous with a certain brand of high-gloss, big-budget action since the days of Top Gun, and indeed, L.A.’s Finest delivers lots of sweeping glamour shots of Los Angeles, along with impossibly beautiful homes and offices to gawk at. (Nancy lives in a ridiculously gorgeous mansion — her husband, played by Chuck alum Ryan McPartlin, is a city attorney, mind you, not a billionaire — and the LAPD station house is packed with more glass walls and high-tech gadgets than an Apple store.) Action scenes are L.A.’s Finest‘s bread and butter, and the pilot does offer plenty of ear-splitting pyrotechnics, including a decently thrilling car chase through the streets of Hollywood. But when the bullets stop flying, the show’s flaws become all the more glaring.

The cases of the week from creators Brandon Margolis and Brandon Sonnier (The Blacklist) are forgettably bland, solved more through dumb luck than any discernible investigative skill and neatly tied up at the end of each hour. (Syd and Nancy’s primary skills as cops seem to be killing and maiming suspects without getting even a hair out of place.) Of course, there has to be a serialized element here, too, with Syd trying to exact justice on the man who tortured her and left her for dead, and the pilot ends on the now-mandatory Twist That Changes Everything. But the overarching mystery makes precious little sense, and gritty backstories really aren’t a substitute for character depth… which is sorely lacking here. 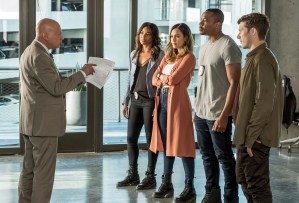 The acting rarely rises above serviceable, but I can’t really blame the actors. These characters don’t speak English; they speak Cop Movie Cliché. Zach Gilford (Friday Night Lights) and Duane Martin (All of Us) co-star as a pair of rival detectives who engage in an ongoing prank war with Syd and Nancy, and Ernie Hudson (Ghostbusters) plays Syd’s former cop dad, but they’re all saddled with dialogue that toggles between robotic exposition and goofy one-liners. Even those tuning in to get a Bad Boys adrenaline fix will likely be disappointed: After the action-packed pilot, the stunt budget seems to take a steep nosedive in subsequent episodes, and the show suffers for it.

I didn’t want to hate this show. I have a soft spot for the shoot-’em-up action movies of the ’80s and ’90s, and there’s definitely room on TV for a fun, retro throwback to those, in the vein of Fox’s Lethal Weapon. But after three uninspiring episodes, I’m ready to ask L.A.’s Finest to hand in its gun and badge.