Noah Wyle is back in Chicago, albeit in a very different drama than ER. In CBS’ eight-part limited series The Red Line, Wyle plays Daniel Calder, a high school history teacher mourning the death of his husband, Dr. Harrison Brennan, an African American man who is shot, while unarmed, by a white cop (played by Shameless‘ Noel Fisher).

The tragedy occurs in the opening minutes of Sunday’s double-episode premiere, when Harrison enters a convenience store to pick up a gallon of milk. After placing it on the counter, he turns his back to retrieve a newspaper reporting on the candidacy of alderman hopeful Tia Young (Hand of God’s Emayatzy Corinealdi), whose relevance to the story is not yet known. It’s at this point that an armed robber enters the store, pistol-whips the cashier and demands that he open the register. When Harrison pleads with the assailant not to shoot, the cashier triggers the silent alarm under the counter.

Once the burglar runs out, Harrison checks on the cashier. He tells him that he’s a doctor, then offers to clean up his bloodied forehead with a first-aid kit behind the counter. Overwhelmed, the cashier shouts in Harrison’s direction, insisting that he doesn’t want his help. That’s when Officer Paul Evans (Fisher) and his partner, Victoria “Vic” Renna (Boss‘ Elizabeth Laidlaw), enter the minimart and assume the robbery is still in progress. Without saying a word, Paul grabs his gun and fires two bullets into Harrison’s back. It isn’t until Harrison is on the ground, gasping for air, that Paul realizes that he just shot an innocent bystander.

After the incident, we jump ahead six months — the day it is to be revealed whether or not Paul will face federal charges — and explore the aftermath of the shooting from the perspective of three families.

THE CALDER-BRENNAN FAMILY | Daniel and his adopted daughter, Jira (Aliyah Royale), are struggling to make it through the first day of school. That afternoon, Daniel’s attorney pays him a visit and informs him that the city has decided not to press charges against Paul. Devastated by the decision, Daniel ultimately moves forward with a civil suit against the city of Chicago in the amount of $5 million. A press conference follows, where the family’s lawyer demands that Paul be discharged by the CPD. 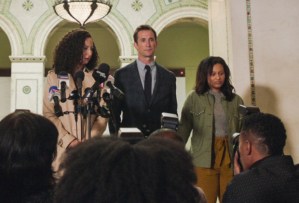 In the wake of Harrison’s death, Jira, who like Harrison is black, begins to wonder about her birth mom. The 17-year-old skips class and makes her way to the adoption agency, where she is told that she’ll need Daniel’s consent to move forward. When Jira tells Daniel that she wants to find her mom, he is unwilling to oblige her request — at least at first.

It is later explained to the audience that Harrison and Daniel were unable to adopt as a gay couple back in the early aughts. In order to proceed, Harrison adopted Jira as a single parent, and Daniel formally adopted her later on. As far as Daniel knows, Harrison met Jira’s mom at the time of her birth, but as part of the adoption agreement, was not given her name. Daniel relays this information to Jira when the discussion of reaching out to Mom is revisited in Episode 2. Jira confronts Daniel with cellphone footage of a reinstated Paul, who earlier that day pulled over two black men and immediately placed his hand on his gun.

“At some point, this is going to happen to me,” Jira says to Daniel. “I need someone who knows how it feels — what it’s like. Whoever she is, wherever she is, I know she looks like me.” And so, Daniel reaches out to the adoption agency, only to be told that Jira’s birth mom is “unavailable,” meaning that, for whatever reason, she can’t — or won’t — meet. 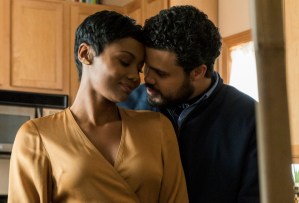 THE YOUNG FAMILY | That brings us back to Tia Young, who is revealed to be Jira’s birth mom. Whether or not Harrison actually knew Tia’s name at the time of the adoption is unclear, but he certainly recognized her when he saw her campaign announcement. Likewise, Tia recognized Harrison when news of his death first broke and made Daniel and Jira public figures. Since then, Tia has contemplated reaching out to her daughter, but her husband, Ethan (The Musketeers‘ Howard Charles) — a train conductor who operates on the very line that Ethan and Jira take to and from school — thinks it’s a bad idea.

Later on, Tia winds up attending the same LGBTQ gala attended by Daniel and Jira, where Daniel is set to speak about his late husband. Daniel and Tia are eventually introduced by a potential donor to Tia’s campaign, but Daniel is unaware that he’s speaking to his daughter’s mother. Tia tells Daniel that she knew Harrison, but makes up a lie about how he treated her in the ER. She leaves the event shortly after their brief conversation, but can’t bring herself to go home. Instead, she rushes back to the gala in hopes of confronting Daniel and Jira, but by the time she gets back, everyone has left. Unable to sleep, she sends Jira an email with the subject line, “I’m your mom,” and tells her that she can reach out when she feels ready. 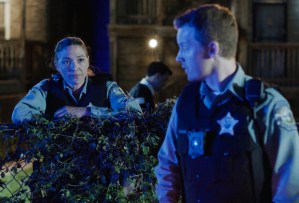 THE EVANS FAMILY | Paul comes from a long line of cops. Among them are his older brother Jim (Private Practice‘s Michael Patrick Thornton), a volatile former officer who was paralyzed in the line of duty. Similar to Vic, Jim’s attempts to help Paul in the aftermath of the shooting are bound to cause more harm than good. Case in point: Vic takes the surveillance footage from the convenience store on the night of the shooting; investigators would have seen that Paul never addressed Harrison before firing his weapon, and she was trying to protect him. Later on, Jim advises Paul to commit to the cover-up and destroy the footage himself. Vic assures Paul that she already did, but she’s lying. Paul finds the videotape in Vic’s safe in the closing moments of Episode 2.

What did you think of The Red Line‘s first two episodes? Weigh in via the following polls, then leave a comment with your full review!