It took a first-of-its-kind emergency for The CW’s Legends of Tomorrow to send Nate and Zari on a proper first date — with over-the-top Nazis.

The first episode of May Sweeps — titled “Egg MacGuffin” and airing Monday at 8/7c — “is sort of the culmination of the Nate and Zari romance that we’ve been teasing for quite a while now,” showrunner Phil Klemmer shares.

“The preceding episode was all about whether Zari (played by Tala Ashe) would text Nate (Nick Zano), and what she would text him, which is the most frivolous plotline we’ve ever had in the history of the show,” the EP admits with a laugh. Leading out of that, “we wanted to give them a proper adventure date.”

At first crack, the plan to evoke the escapades of an iconic big-screen archaeologist came off a little too ordinary. “We knew we wanted to do Indiana Jones, and we broke a straight version of that, but then it felt too up the center,” says Klemmer. “So we had the only time we’ve ever done an emergency weekend re-break.” The result of that rewrite was “Indiana Jones by way of Date Night,” as Sara sends Nate and Zari to catch a fugitive in New York City circa 1933. And yes, in true Indiana Jones fashion, there will be Nazis. With a big, wink-wink twist.

“Nazis have been done so many different ways” — including within the Arrowverse — “that there’s something almost caricaturist about them as villains,” Klemmer notes. “So as opposed to accidentally doing cartoonish villains, we were like, ‘Let’s just lean into this and see how we could make that a virtue.’ Both Nate and Zari are so irreverent and kind of snarky, it was fun to put the two of them in this world where you’re like, ‘Is this real or is everybody in this story basically playing a part?'”

Assessing the budding something between Nate and Zari, Klemmer says, “We weren’t sure whether this was going to work or not” until the Bollywood episode rolled around, and there was this “incredibly sexually charged moment” as Zari fixes Nate’s tie. “When you try to force characters together it sometimes feels forced, but Tala and Nick are friends and they have this great energy.” 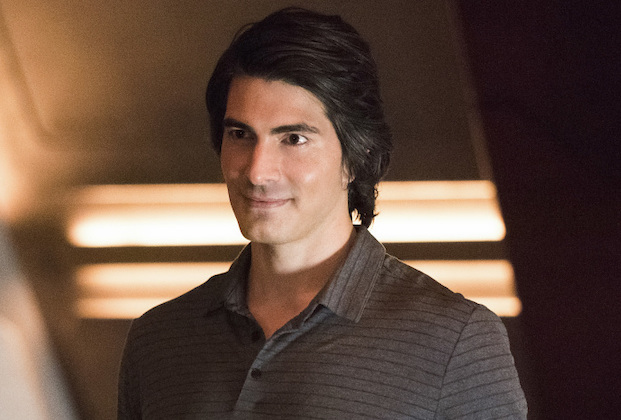 Elsewhere in this week’s episode: As suggested by Sara’s devil-may-care decision to play matchmaker for two Legends (watch video below), she and the rest of the team will enjoy a false sense of security, unaware that the demon Neron is now using Ray as a host.

“Obviously you can’t defeat Neron in the middle of the season, so this episode is kind of a ‘fake season premiere,'” Klemmer chuckles. “We think we’ve dispatched our Big Bad for the season, and we wanted to let all of our characters slide back into real life. As you get towards an endgame, people stop having human problems, so it was a palette cleanser in the middle of the second half to be like, ‘All right, we’ll let them think that everything’s done, that way everyone can start indulging in whatever they have going personally. You know, human stuff.”