Here’s the harsh truth at the center of Supernatural‘s penultimate season finale: Jack needs to die — or at least that’s what Dean believes. The hunter even calls Jack “just another monster” before telling Sam that they have to do “the hard thing, the ugly thing” by ending him. It certainly wouldn’t be the first time they’ve been faced with such a situation, but this one is a little different because they’ve got an an assist from a familiar face: Chuck, aka God!

The Almighty shows up because he heard Cas’ prayer — and because Jack is “a problem.” The Nephilim has sent the world into chaos by removing everyone’s ability to lie. Along the way, we learn Sam’s favorite singer is really Celine Dion, the Queen of England is a lizard and that the President spent a two-hour press conference disclosing his tax statements, his ties with Russia and his deal with Crowley. Chuck notes that lying is good because it keeps the peace, and as a writer, lying’s what he does. (Foreshadowing!)

Although Chuck has been hands-off in the past, when things get apocalyptic like they have with Jack, he has to step in. He can’t restore the kid’s soul, but he does have a special gun which could kill him. There’s just one catch: Whatever happens to the person you’re aiming it at also happens to you. Dean believes this is their only option and tells Cas to get on board with the plan or walk away — and Cas chooses the latter. Of course the elder Winchester is planning to be the one to pull the trigger, and of course his brother isn’t happy about it. They always have a choice, Sam notes, and they haven’t even tried to save Jack, who burned off his soul to save them. So if Dean is looking for approval, he’s not going to find it. “I’ve already lost too much,” Sam says.

Meanwhile, Jack meets up with Cas in the cemetery after unsuccessfully trying to speak with Kelly Kline’s mother. Jack explains that he always just wanted to be good, but now he feels empty. As the two are chatting, Dean shows up with the gun, ready to shoot Jack. “I understand,” Jack responds, peacefully getting on his knees. “You were right all along. I am a monster.” Then Sam drives up, begging Dean not to go through with it, while Chuck just stands there. After the longest pause ever, Dean lowers the gun and tosses it to the side.

“This isn’t how the story’s supposed to end!” Chuck exclaims, begging Dean to pick up the gun. “This is Abraham and Isaac. This is epic.”

Sam realizes Chuck has been playing them the whole time; he wrote it all, yet he’s just been sitting back and watching them suffer their entire lives. Sam recalls their earlier conversation about how in all the multiverses, this Dean and Sam are Chuck’s favorite show. Everything always falls on them, because they’re his guys. But when does that suffering and burden end? 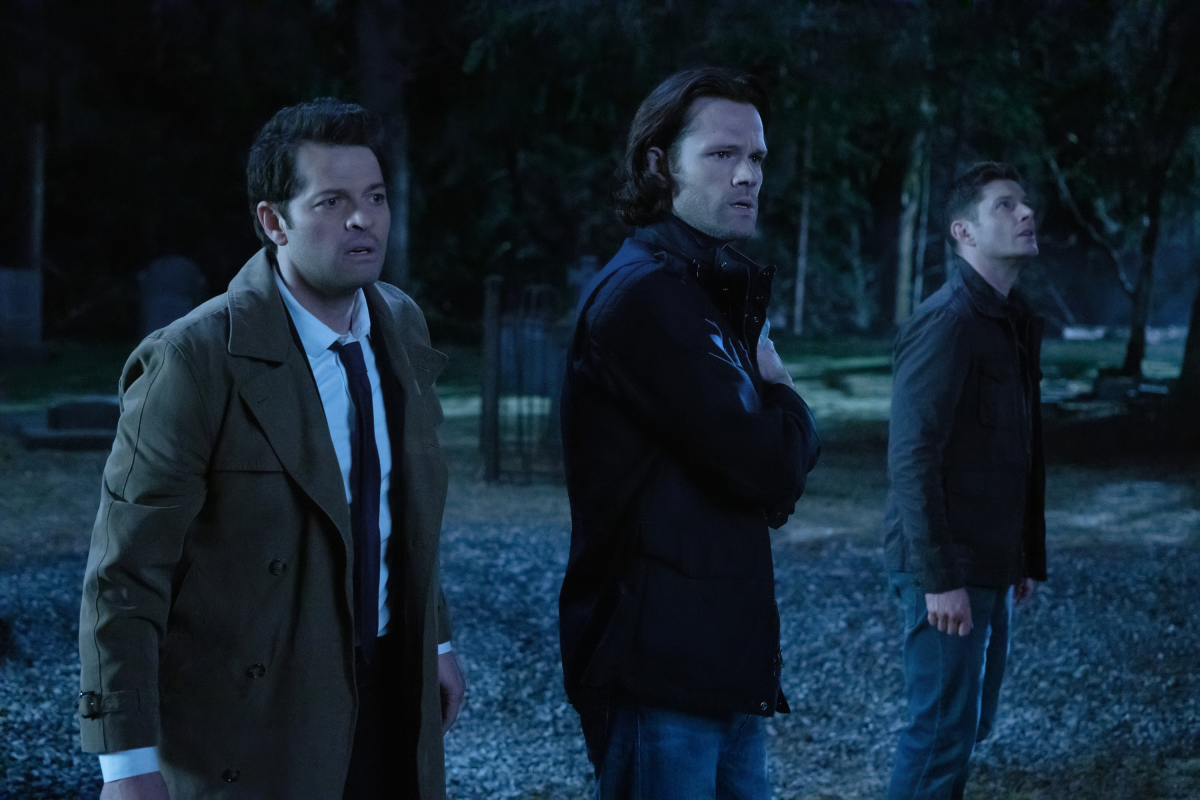 Chuck offers to bring back Mary if Dean kills Jack, but it’s a no-go. “This isn’t just a story. It’s our lives. So God or no God, you go to Hell,” Dean declares. That pisses Chuck off, so he snaps his fingers and kills Jack! Sam retaliates and shoots Chuck with the gun! “Story’s over. Welcome to the end,” Chuck announces, sending the cemetery into darkness and unleashing all the souls from Hell, including a few familiar Season 1(!) ghouls like the Woman in White and Bloody Mary. As the episode ends, Dean, Sam and Cas find themselves surrounded by the undead, while Jack wakes up in the Empty, where Billie tells him they should talk. It’s all kind of wild and a great way to go into the final season.

Supernatural fans, what did you think of the season ender? Grade it via the poll, then hit the comments with your thoughts!