The following contains a Bat-tastic amount of spoilers from the Gotham series finale.

Fox’s Gotham wrapped its five-season run on Thursday night with an epilogue, set a decade into the future, that teased… and teased… and teased Bruce Wayne’s return to his hometown, while introducing the new threat that is no joke but is fated to vex him for years to come.

Following a brief cold open in which we see young Bruce arrive at the outskirts of Nanda Parbat as he narrates his good-bye letter to Alfred, we jump 10 years into the future, where Gotham is readying for its prodigal son’s return, for the opening of a sleek new Wayne Enterprises tower. Havoc is about to ensue, though, as Oswald is released from prison at the same time that Nygma gets broken out of Arkham (where he had just taunted a long-“braindead” Jeremiah Valeska). Soon after, Harvey is checking on an Arkham guard who didn’t show up for work when said guard hands Harvey a phone. The unheard person on the other end orders Harvey to take the rap for what is about to happen, as the guard puts a bullet into his own head.

Unable to make Harvey ‘fess up to what’s really going on, Jim chases some leads on the dead guard, leading him to a warehouse where a caped, like, “crusader” of sorts lurks in the shadows. Free Oswald meanwhile suits and monocoles up to later get the drop on Jim and lead him to the pier where the roles were reversed way back in Season 1. Jim, though, easily escapes execution by diving into the river.

Over at the Wayne Enterprises party, “It girl”/cat burglar Selina (played by Banshee‘s Lili Simmons) vents to Alfred that Bruce has no business popping back into their lives after a 10-year absence, nor should he. Alfred rightly notes that for someone who has no wish to see the man who exited stage left on her a decade ago, she sure does look purrrrrty. When Selina spots Nygma slipping off into the catering kitchen, she grabs Barbara (now a legitimate businesswoman/real estate tycoon) and KOs the escaped criminal. But when a bomb threat creates pandemonium, Nygma is again spirited away to safety, to be reunited with Oswald. Their reunion is cut short, however, by a man dressed like a bat, who hoists them up from a street lamp. Later, as Alfred and Lucius admire the vigilante’s handiwork, we realize they are both aware of Bruce’s new mission and their respective roles to “serve” it.

After Lee and her steady doctor hands helps defuse the bomb at the party, Jim finds and presses Harvey for the truth about his “murder” rap, and whether the same person was behind Nygma’s breakout: Jeremiah. Realizing the crooked guard at his side was wearing a wire, Harvey fears the worst now that Jim has said that name. And sure enough, Jeremiah shows up at Barbara’s club to kidnap her and Jim’s daughter (played by, yes, the spooky Pet Semetary girl). Jim tracks down Jeremiah (or “J”) at Ace Chemicals, where wee Barbara is being dangled over a vat of acid. After explaining that he was playing braindead until Bruce returned to town, J waylays Jim’s attempt to save his child by driving a knife into him, at which point that caped vigilante, lurking in the rafters, zings the villain with bat-shaped throwing stars.

Saved by this new hero in the dark of night, Jim reconsiders vacating the commissioner position and dusts off the giant spotlight. Selina meanwhile is standing on a rooftop when she correctly senses Bruce’s presence, as she had earlier. Pouring out her heart like never before, she said that back in the day, “I didn’t want to be protected; I wanted you!” Unseen in the shadows, Bruce explained, “There was no other way. I had to go.” But he promises to never leave Gotham again. 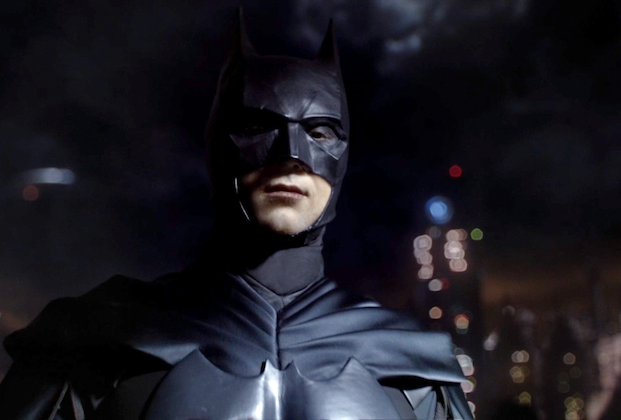 The finale ends with a bat-fearing Penguin and Riddler putting off their grand plans until “tomorrow,” while Jim, Harvey and Alfred — standing by the shined-up spotlight — reflect on how Jim “saved” young Master Bruce when he was a tyke mourning murdered parents. Harvey interrupts by remarking, “Holy mother…,” and they all take in the site of he who will become known as Batman, looking over them from a high rooftop. “Who is he?” asks Harvey.

Gotham showrunner John Stephens is currently out of the country, but he obliged TVLine by answering via email a few Qs about the series’ very final hour.

TVLINE | Do you have a personal favorite moment from the series finale, Batman reveal excepted?
It’s hard to say. I really like the scene between Selina and Bruce on the rooftop. To me it has a great feeling of fated-ness, where I know these two people still care about each other but that Bruce’s mission is going to keep them apart. I also really like the scene in Ace Chemicals with Jim, J and the Bat. It feels like, no surprise, the most Batman-y moment we’ve done.

TVLINE | Was there any thought/attempt to have adult Bruce actually appear in that nonetheless beautiful scene with Selina?
No. We wanted to maintain the sense of mystery about him, both as Bruce and Batman, until the very end of the episode. The story was predicated upon that mystery, that none of the characters would actually see him till the very end, so whether it was Bruce or Batman, we wanted to keep him hidden. 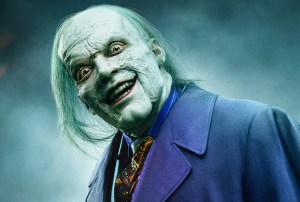 TVLINE | Talk about what you wanted from your design for J(eremiah).
A whole team of people went into that — our amazing wardrobe designers, our hair and make up departments, and Cameron Monaghan. That said, our intention was to evolve the character one step further from what we’d seen with Jeremiah and Jerome in their various iterations. There was a sense of greater performance, but also we wanted to go for something that touched even more on the horror inherent in the character. Which I think really comes out.

TVLINE | Why was Oswald “thicker in the middle”?
You know, Matt, when you get older your metabolism slows down. Also, there’re a lot of carbs in prison. 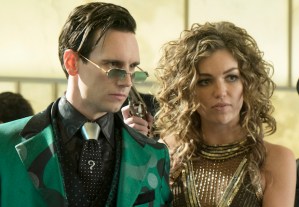 TVLINE | Was there a possible Catwoman spinoff lightly planted here…? One starring Lili Simmons and maybe set in the years just before Bruce returns?
I don’t know that it’s planted. I’d say… hopeful?

TVLINE | Any Easter eggs that you took great pleasure in, which we might have missed?
To tell that would be undoing the whole concept of Easter eggs, now wouldn’t it!

What did you think of Gotham‘s series finale? Grade it in the poll below.