Family feuds were the theme this week on The Flash, as the West-Allens argued over an abandonment issue and things got ever chillier between the Snows.

Kicking off the episode, Iris rightly railed at Barry for whisking Nora back to the future and then leaving her there, forbidden to return. “You always see one way through a problem, damn what I think,” she roared. Despite therapy and what not over the years, “You’re still making decisions based on emotions.” When Barry attempts to respond, Iris reminds him of Flashpoint and how he voluntary entered the Speed Force, as but two examples. She then drives home the point, “I didn’t even get to say good-bye!”

Barry was walloped with an epiphany when he suggested that Nora aligning with his arch enemy, Eobard Thawne, doesn’t bother Iris. “No, it doesn’t,” she cooly confirmed. Barry suggests that Iris, too, is acting based on emotions, as a mother whose daughter now doesn’t hate her for difficult decisions to come. “Look in the mirror,” he says, before Iris slips away to take a big swing of her own.

Iris confers with Gideon on how to use the time sphere to track and find Nora in the future, but Ralph catches her — not to stop her, though, but to help. And Ralph’s assistance proved handy, as he shapeshifts into the surly prison guard minding Thawne, so that Iris can pay her daughter’s sketchy mentor a visit. Nora is there at the same time, though, puzzling over why she wasn’t able to access a “negative” Speed Force of her own, as Thawne did over the years to sneak up on Barry undetected. Seeing Iris, Nora is filled with enough rage to acquire the speed she needs and vanish off into her own Speed Force.

When Iris returns home, she and Barry retreat to the loft for a much-needed talk, where they both cop to making mistakes in their decision-making — “We can’t solve this if we don’t stick together.”/ “Let’s bring our kid home.” Oh, and one other thing, Iris points out: Thawne seems to genuinely care about their daughter. (Or does he? What is his endgame?!)  Whatever the case, at episode’s end we see Nora emerge from her Speed Force with a singed speed suit… and sinister, red glowing eyes. Yikes. 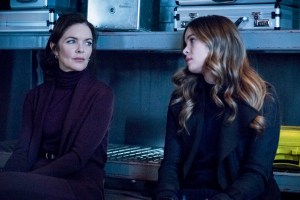 * Icicle aka Caitlin’s father broke into Dr. Carla Tannhauser’s lab to steal a next-gen “cryo-atomizer” — or as I will call it from here on, “an orb” — which Team Flash realizes he plans to use to throw Central City into a new Ice Age. But in the short term, Icicle aims to give Carla her own icy alter ego, so he kidnaps her and a meta-cuffed Caitlin. Barry arrives in time to try out a new trick that saves Carla from a cryo chamber, while Killer Frost chases after Icicle via a series of swirling ice ramps. Icicle gets the drop on Killer Frost and plunges an icicle (a bit on the nose, eh?) into her, turning her back into Caitlin. But when he goes to deliver a death strike, Thomas fights this way out of Icicle to intervene and save his daughter. Later, though Carla appears to have emerged unscathed by the incident, as she and Caitlin head out for drinks we see a disposed sample of her blood freeze over, suggesting that an icy meta may be laying in wait inside her….

* Cicada II somewhat randomly made an appearance at the end of the showdown with Icicle, to steal the orb. Afterward, we see her with her younger, comatose self, whom she took from the hospital, saying, “Soon, Grace…. Soon.”

What did you think of the episode “Snow Pack”?