It feels a bit morbid to point this out, but grief has become a certified TV trend lately, with shows like Sorry for Your Loss, Kidding and The First all tackling the pain of losing a loved one. But Netflix’s new dramedy Dead to Me — debuting Friday, May 3; I’ve seen the first six episodes — might very well be TV’s first “grief-com,” putting a darkly comedic spin on the grieving process. It also throws a barrage of thriller-like twists at us to keep things nice and juicy; it’s an odd blend of tones that doesn’t always work, but the smart, spiky humor and standout performances from stars Christina Applegate and Linda Cardellini combine to make it a satisfyingly offbeat binge. 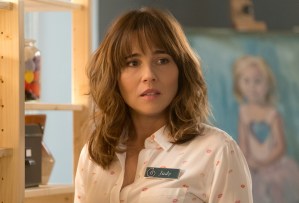 Applegate stars as Jen, an Orange County realtor whose husband was killed in a hit-and-run. It’s clear she had a bitingly hard edge even before her husband died: She groans at a well-meaning friend’s casserole gift and rolls her eyes at all the touchy-feely talk spouted by her grief support group. (Dead to Me grapples with the messy side of grief with a bracing honesty.) But at that group, she meets Cardellini’s Judy: a loopy, impulsive free spirit who clicks with Jen right away. The two women bond over late-night phone calls and Facts of Life reruns — they’re a classic duo: the cynical realist and the bubbly dreamer — and their slow-building friendship forms a strong foundation for the show to build around.

Judy’s backstory is a lot more complicated than she lets on, though. (“Wherever Judy goes, chaos tends to follow,” a character notes ominously.) Dead to Me isn’t shy at all about piling on the plot twists: The premiere ends on a shocker that adds a sinister edge to everything we’ve seen before, and most of the episodes I’ve seen end on cliffhangers, too. It’s a bit much — the twists feel like a Netflix corporate directive to ensure that viewers rush to binge the next episode, rather than an organic storytelling choice — and as a result, the show’s tone is kind of all over the place, from black comedy to earnest drama to crime thriller and then back again.

In short, Dead to Me tries to be a whole lot of different things at once — but most of them succeed, actually, thanks to the strong work from Applegate and Cardellini. Applegate really goes through the emotional wringer here as Jen, who’s still simmering with rage at the driver who hit her husband… and the universe that let it happen. And it’s nice to see Cardellini get such a fun, meaty role, a full two decades (!) after she first broke out on Freaks and Geeks. Their rock-solid bond helps to anchor Dead to Me through all its twists and tonal shifts, and the sharp bursts of dark humor peppered in throughout by creator Liz Feldman (2 Broke Girls) help to lighten the mood, too.

Early on, I worried that Dead to Me was more interested in cranking out gasp-worthy shockers than actually listening to its characters. But after a few episodes, it grew on me: The twists started to fade into the background, and Jen and Judy’s crazy, complicated friendship began to shine through. On TV, characters win out over plot, always. The story definitely places Jen and Judy on a wild rollercoaster with plenty of sharp turns… but once we get to know them, we’d follow them anywhere.

THE TVLINE BOTTOM LINE: Netflix’s Dead to Me probably relies too heavily on plot twists, but the jokes are sharp, and Christina Applegate and Linda Cardellini make a compelling duo.