On this week’s Arrow, the Diggles gave the Queens a run for their money in the daddy issues department.

After discovering that someone at A.R.G.U.S. has been leaking classified intel to the Ninth Circle, Dig takes Oliver along to visit a contact at the Defense Intelligence Agency. Dig insists on taking the lead since General Stewart (guest star Ernie Hudson) can be “a real hardass,” but doesn’t explain how the two know each other. From the way the General takes Dig to task for leaving A.R.G.U.S. and throwing away the chance at a Pentagon job one day, it’s clear there’s a lot of history between them. Dig counters back that he left to protect his family, which is something Stewart wouldn’t understand — as his stepfather. Dig later confesses to Oliver that his father died under Stewart’s watch, and just six months later, Stewart was coming around for dinner. When he married into the family, he made Dig and Andy do hardcore Spartan survival drills.

Meanwhile, the Ninth Circle breaks into Smoak Tech’s office and steals Archer in order to find an extremely dangerous biological weapon that Stewart once worked on. Dig and Stewart set off to thwart them, but end up getting captured. After Stewart uses one of his Spartan tricks to bust them free, Oliver gives Dig the mission file that Felicity hacked into, which reveals that it was actually Dig’s father who was negligent and also cost two Marines their lives. Dig confronts Stewart, who explains that he lied because every kid deserves to be believe their father is a hero. And in believing that, Dig became a hero himself. “If I’m a hero, it’s all because of you,” Dig tells his stepdad, who reminds him to call his mother. (Ha!)

During a less happy family reunion, Oliver finally tells Emiko that Dante murdered her mother. She calls him a liar and the two proceed to battle it out until Oliver declares, “He misled you. He doesn’t care about you. I do.” Despite that sentiment, she still leaves with Dante — but then kills him at the episode’s end.

Elsewhere, the Ninth Circle successfully using Archer to get the biological weapon leads Felicity to realize that what she’s created can be easily used manipulated into something bad. “I’m a mad scientist,” she gasps, before realizing it’s worse: “I’m my dad.” So Felicity activates a self-destruct protocol, which is especially painful because a robotics engineering whiz was interested in the company. Alena suggests rebuilding Archer to make it less easy to steal, but Felicity nixes the idea. Alena — who is eyeing the root code for Archer in a way that does not bode well — reminds Felicity that Overwatch will not be her only legacy; she is the legacy. 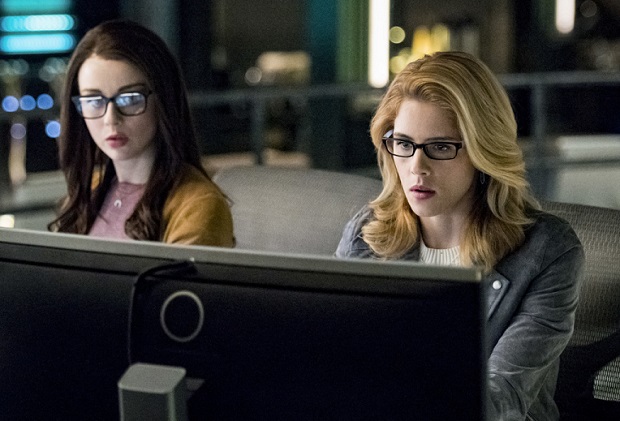 Meanwhile, in 2040, Galaxy One has found a way to expand Archer’s tech into an unstoppable army, which is definitely not the kind of legacy Felicity wanted. The flash-forwards also feature their own Diggle family daddy issues when Connor reveals to Mia that his brother John Jr. is the leader of the Deathstroke gang. Once best friends, Connor and JJ haven’t seen each other in a year. The trouble started when JJ and Dig began butting heads, and then Connor just reminded JJ of everything their parents expected him to be. (So many dysfunctional parent-child relationships in the future. Perhaps Team Arrow should have attended a parenting seminar or two?) After Connor opens up to Mia, she apologizes for getting mad at him, just as one of JJ’s guys attacks them. They manage to escape into a quiet corner, where they share a very heated look.

Arrow fans, what did you think of the episode “Spartan”? Hit the comments with your thoughts!