Star Trek: Discovery capped off its sophomore season with a breathlessly paced finale packed with eye-popping visual effects. But where did it leave Burnham and company when the dust settled?

Thursday’s finale picks up with the Enterprise and the Discovery staring down Leland’s fleet of Section 31 ships, with Burnham and Stamets in a frantic scramble to finish assembling her time suit. After Leland demands they turn over the Sphere data, Pike tries to distract him by sending out a bunch of cool little mini shuttles to draw fire, but Leland one-ups him by launching hundreds of tiny drones to swamp Pike’s shuttles. An intense firefight ensues, with a dizzying array of phaser blasts shooting through space and our heroes’ ships taking plenty of damage — and Burnham’s time suit still isn’t ready to launch.

To help out, Queen Po jumps in a shuttle and figures out a way to vaporize Leland’s drones, giving the Enterprise and the Discovery a fighting chance. As Pike wedges the Enterprise between Leland’s drones and the Discovery, acting as a protective shield, Burnham’s suit is finally ready — but an explosion knocks her to the ground, and badly injures Stamets. While Tilly rushes him to a chaotic sick bay, Burnham and Spock continue on with the time suit, with Spock giving her a brotherly pep talk (they exchange Vulcan salutes!) before she launches herself into space, dodging enemy drones and gunfire while Spock follows behind in a shuttle. (The effects here are just dazzling, by the way. Wouldn’t this look amazing in IMAX? I’d pay 20 bucks to see it.)

But things take a harsh turn: Leland beams aboard the Discovery while its shields are down and fires a few shots on the bridge before scurrying off to find the Sphere data, and an undetonated photon torpedo smashes into the Enterprise, lodging in the ship’s saucer. If this looks familiar, it should: It’s the horrible future Burnham saw when she touched the time crystal. “This is how it starts,” she realizes, and she can’t seem to get the time suit’s navigation system to launch her into the future, either. Dire straits, indeed. 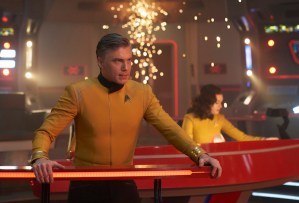 Spock has an idea, though: The time crystal only showed her one possible future, and each red signal led them to a spot that would help them complete this mission, so Burnham just has to go back and revisit each of those in order to access the future. “So you’re asking me to take a leap of faith?” Burnham asks her brother. “One that is only logical,” he replies. Plus, the good guys get reinforcements when Tyler and L’Rell materialize in a massive Klingon ship — “The Klingon empire will always fight to preserve our future,” L’Rell roars — while Number One and Admiral Cornwell work on deactivating the lodged torpedo and Georgiou works on hunting down Leland.

Burnham fires up the time suit and hurtles through what looks like the Star Gate scene from 2001: A Space Odyssey, zipping back in time to the previous red flashes — her on the Hiawatha, Saru and his sister, Pike grasping the time crystal — while the action ratchets up to unbearable levels back in the current timeline. Georgiou and Leland engage in some brutal hand-to-hand combat (when the ship’s gravity system fails, they keep fighting on the walls and the ceiling), the Discovery‘s shields drop to perilously low levels, Number One and Admiral Cornwell run out of ideas on the torpedo as the time ticks down to detonation… and Stamets reunites with Hugh in sick bay, with Hugh telling him, “You’re my home.” (Aw!) 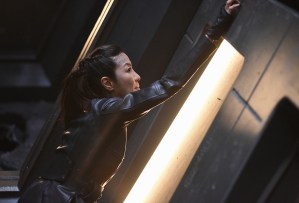 Finally, Burnham returns to the current timeline and gives the Discovery coordinates to follow her through the wormhole… 930 years in the future. (Talk about boldly going to a place no one has gone before.) The good news: Georgiou manages to trap Leland in the spore drive room and magnetizes it, destroying him and turning his drones into sitting ducks. The bad news: Admiral Cornwell has to seal herself off with the torpedo, sacrificing her life to save the rest of the Enterprise when it explodes. That sets the stage for Burnham to leap into the future: After saying goodbye to Spock (“Find the person who seems the furthest from you,” she encourages him, “and reach for them”), she dials up her new coordinates and disappears through the wormhole, with the Discovery following close behind.

Back in a futuristic San Francisco, Pike and the Enterprise crew are debriefed by Federation officials, and they all lie that they saw the Discovery explode. Control is defeated, Tyler is promoted to head up Section 31, and Spock gets a haircut and shaves his beard (!), sporting the classic Spock look in a crisp blue uniform as he narrates a message to his sister Michael. “I feel you’re with me, always,” he says, and he sees a seventh red flash in the sky — Burnham’s message that she’s OK — as Pike takes the newly repaired Enterprise out for a spin, with Spock adding: “Let us see what the future holds.”

* But wait, what actually happened to Burnham and the Discovery? It was nice to see Pike, Spock and the Enterprise embark on a new mission, but what does Season 3 of this show even look like? I feel a little cheated that the finale didn’t give us at least a glimpse of where Burnham and her Discovery pals find themselves on the other side of that wormhole. I even scanned ahead to check for a post-credits scene. Nope. Nothing.

* We definitely want Tig Notaro to stick around as Reno for Season 3, right? Her deadpan one-liners are just perfection.

* Stamets didn’t look so good in those final sick bay shots, did he? Here’s hoping he’s back, too. Reno needs someone to bounce those one-liners off of.

* Not to second-guess Admiral Cornwell, but if you’re dealing with an undetonated photon torpedo and it could end with someone having to sacrifice their life to save the ship, maybe send someone a little lower down the chain of command than an admiral? (Where’s a good old-fashioned red shirt when you need ’em?)

* Will Burnham’s advice to Spock to connect to “the person who seems the furthest from you” be the seed that blooms when he crosses paths with a headstrong James T. Kirk in a few years? Just saying.

Alright, Trekkies, now it’s your turn: Give tonight’s Star Trek: Discovery finale a grade in our poll, then beam down to the comments to share your thoughts.