A-Ha’s “Take on Me” has never sounded so sad. During The Magicians‘ Season 4 finale, Quentin, Alice and Penny 23 traveled to the mirror world to toss the monster and his sister into the seam between worlds. However, their quest was interrupted by Everett, who broke the mirror. After doing some minor mending, Quentin was able to send both siblings into the seam — but also sacrificed his own life in the process, as Alice watched on in anguish. (Remember, magic is a no-no in the mirror world.)

Following his death, Quentin was reunited in the underworld with Penny 40, who took Q to his own funeral to show him that he changed his friends’ lives as much as they changed his. Tearfully, Quentin watched his pals break into a tender, a cappella rendition of “Take on Me.” At the episode’s end, Penny 40 handed Q an underworld metro pass before declaring that this was as far as he goes. With that, a solo Quentin stepped through a mysterious doorway… and out of the show.

Below, showrunners John McNamara, Sera Gamble and Henry Alonso Myers talk about Quentin’s departure — his portrayer Jason Ralph will not return as a series regular in Season 5 — and what comes next for Q’s friends.

TVLINE | Going into this season, what kind of conversations did you have with Jason about this goodbye? Did he know at the beginning, or was it something you clued him into later in the season?
MCNAMARA | We actually had a very open and kind of great conversation at the end of Season 3. We always want to talk to the actors. “How did you feel about the season? What were your favorite things? What do you want to do next season?” We had a feeling that Jason was beginning to sense that he’d explored a lot of that character and had grown a tremendous amount in terms of how that character’s journey unfolded. [We had a] discussion with him on Skype. It just became really clear to Sera, myself and Jason that the best next step for this character would be the kind of death that we had laid out for him that eventually formed this climax. So it was an oddly drama-free, very much mutual, totally creative decision. It was just: How do we best serve this character’s journey, and how do we best continue to shock and surprise our audience? And the answer turned out to be this one thing. He was onboard from jump street. 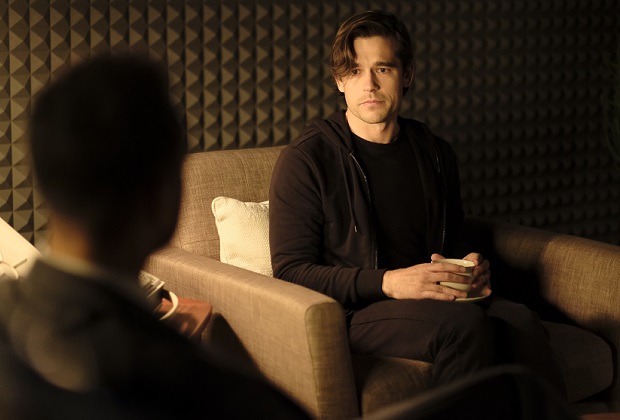 TVLINE | What qualities did you want to imbue this final Quentin episode and his exit with?
SERA GAMBLE | We knew we had a tremendous opportunity, because Quentin has an old, dear friend working off a billion-dollar contract in the underworld. So we realized we had a unique opportunity on this show to explore life and death, and the questions we all have about what constitutes a complete life and what comes next. Some of those questions are, to us, unanswerable so we don’t want to answer them on the show either. It was just exciting to be able to access that.

It’s really lucky and a privilege to be able to tell a story for this long. Shows are usually cancelled, full stop. So when you get to tell a story over many years, and you have creative partners that are as invested as you are in being really rigorous and challenging to every person who is part of telling the story, sometimes you get to do something like this, where you take a character through their whole life journey, essentially. With the incredibly important added part of this, which is that all of the people who love him the most live on, and they experience what it means to lose Quentin, just as the audience is experiencing what it means to lose Quentin, and we’re all very excited about that as well. Because, essentially, we’re a show about growing up and becoming an adult in the truest senses of the word, and losing someone is a huge part of that, losing someone you love.

TVLINE | The way he goes out, it’s such a heroic sacrifice. And between the special effects and the song choice, I think it’s one of the most beautiful death scenes I’ve ever seen on a TV show.
GAMBLE | That was a true writing team situation with John and I, who wrote the script together. I actually had that song before we wrote the scene, and I sent it to him and said, “I just kind of imagine it to this song [‘Cruel World’ by Active Child].” Then because John is John, he came back to me, and he’s like, “And then there will be a musical number.” [Laughs] So that’s how you know it’s a true collaboration. 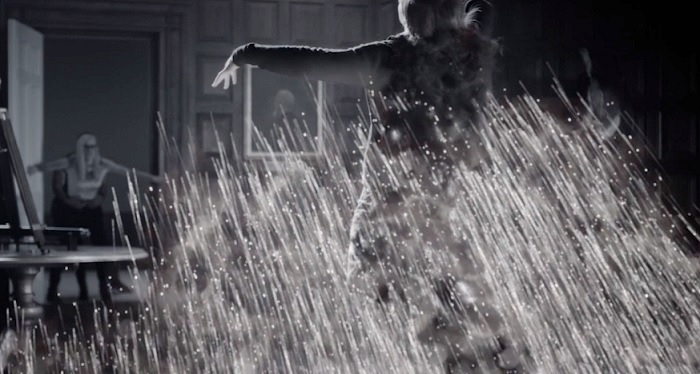 TVLINE | Was the special effect something you had in mind, or was that something that the special effects team came up with? It was just so striking. I couldn’t get it out of my head after I watched it.
MYERS | If you read the description in the script, it’s weirdly specific, and we tried a lot of different elements before we got settled on the thing. What was very moving about it for us was, in the [writers’] room, in the build up to this, we spent a lot of time looking back at the books to find stories that we hadn’t yet touched that we knew that we wouldn’t have a chance to do without Quentin. One of the big elements of that was minor mending. So once we had settled on that it was his final act of minor mendings that… would ultimately rebound, that was sort of our true north. We kept looking at that, and how that would look if it built slowly and then kind of overwhelmed him.
MCNAMARA | We give a lot of credit to our VFX supervisors, Jay Worth and Curtis Krick, because they were tireless in bringing us choices. There was a lot of kind of, “Yes, that. Not that. Yes, that, but not that color. Too much fire, too much whatever,” and they were just great about it. They really were. They never gave up. … Chris Fisher, who directed it, staged it so beautifully and so cleanly. The geography of the staging, I think, is extraordinarily exciting and pretty clean. You know where everybody is. You’ve got a very complicated setup. You know exactly what’s happening. Often, I think, one of the things that can hurt a fantasy or science fiction show is suddenly you’re making up new rules that are very convenient. This was a world in which all the rules were set up early, and it all conspired to kill Quentin, unfortunately. It’s like a giant Jenga of tragedy. 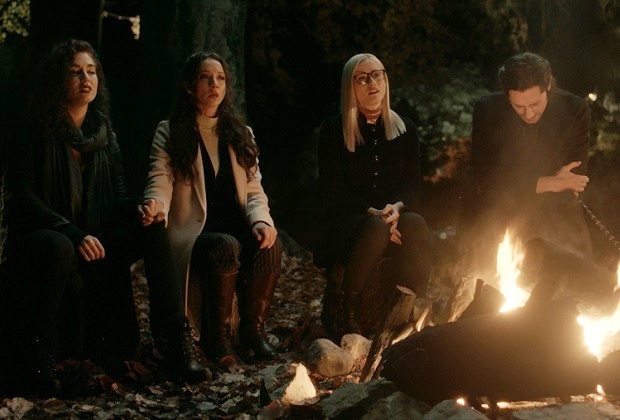 TVLINE | And bravo, John, on getting another musical number in before the end of the season. How did you land on “Take on Me”?
MCNAMARA | My son is very musical. He’s a wonderful pianist. Every night, we go on YouTube and try to find different songs, new songs, music videos and whatever. We literally stumbled across this A-Ha concert in, I think, Sweden, where they did a live acoustic version of “Take on Me.” I just tucked it away like, “That’s a cool version of that song. It’s kind of sad and interesting.” Then I was in the booth recording some of the songs for our musical [episode], and Olivia [Dudley] was coming in to sing her part, and she was humming “Take on Me.” I’m like, “Are you humming ‘Take on Me’?” and she goes, “Yeah, I listen to it every day. I love it.” I said, “Why do you listen to it so often? I love it, too.” She goes, “It’s just a really good way to get into my emotions. If I have an emotional scene, it really helps me get there.” I thought if there’s a way to get that quality of that song into the show, I really want to try it.

I’ve been to probably more funerals than I’d like to have been to, but I find that they all have one thing in common: The moving parts of funerals are usually not the oratory, but the music that’s chosen. It sort of reflects the life of the person. Because we’ve established this kind of spell that a magician can do that gives you instant lyrics, instant orchestration, it felt like a natural place to start with the awkward, “What do we say? What do we say? What do we say?” Then Kady sort of takes point and gets them to express what is, I think, much harder to express with simple words. And also, it would allow for brief moments of flashback to certain moments of the show that meant a lot to Quentin, or where Quentin had a huge effect on one of the characters. And finally, when we figured out that Quentin could actually be there watching his own funeral with Penny 40, that, to me, was like the last [piece] clicking together, because you have basically a performance and an audience. It staged itself nicely without being too, hopefully, treacly or too sentimental. 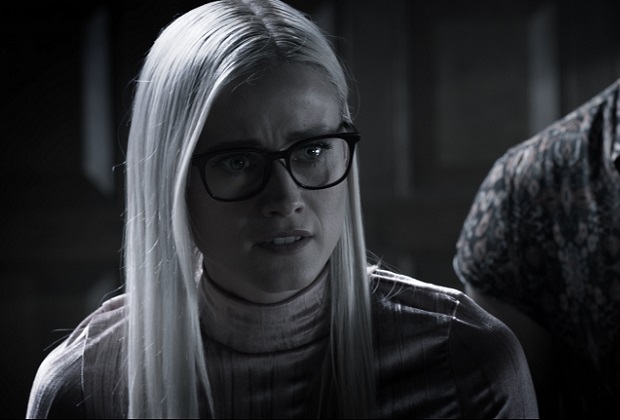 TVLINE | We don’t actually see Alice in the future glimpses that Penny 40 gives Quentin. We just hear about the fact that they want her to run the library. How is she dealing in the aftermath of losing Quentin?
GAMBLE | I don’t think that there’s a character on the show who’s not touched in a deep way, in a profound way, by what happens to Quentin. That feels honest to us. It’s just human to have experienced a bit of life. Quentin had a unique relationship with each of these characters that you’ll see in Season 5. The way that they sort of metabolize his death, it’s not always linear, but it’s sort of a flavor that runs through everybody’s story in Season 5.

What did you think of the surprising season ender? Grade it via the poll below, then hit the comments. And stay tuned to TVLine for Season 5 scoop!