The Rookie exam was put on hold this Tuesday, when Officer John Nolan & Co. had to deal with a potential terrorist threat. As Season 1 of the yet-to-be-renewed ABC series faded to black, which cop’s life was in limbo?

The potential terrorist attack came to light — at least for the LAPD — when Nolan and Bishop were called to check out a dead man found in a bus station bathroom. No sooner had Nolan started poking around the corpse and his wallet, while properly gloved up, did Russo show up with a CDC bigwig (hey, it’s Felicia Day!) to warn that the victim was likely involved in the imminent spreading of a hemorrhaging virus. 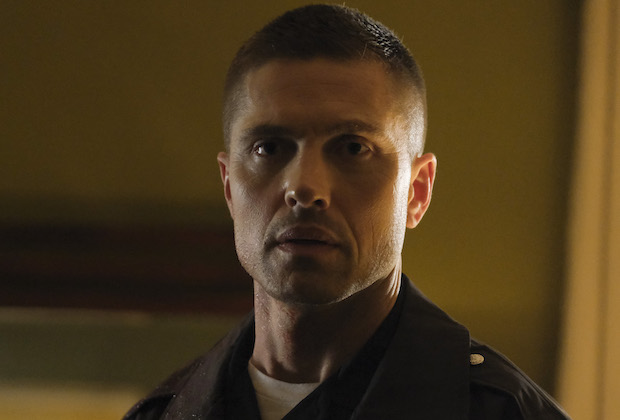 While Nolan lambasted Russo for not saying anything about the rumored attack when he shared with her earlier that his son may be coming to town, Bradford and Chen got called to the home of another bus passenger, who actually wanted to report an accidentally switched backpack. Alas, just as Bradford realized that the man had been infected by the bag’s contents, he was spattered by the man’s coughed-up blood. Bradford instantly shut the bedroom door between him and Chen to protect her, after which he couldn’t do much more than sit and watch the infected man slowly and grotesquely die in a pool of blood.

Getting a bead on the two possible terrorists still out there, the cops set out to cut off roads to the airport, until Nolan surmised they’d be using backroad shortcuts. Locking in on the perps’ blue sedan, a high-speed chase ensued, with Nolan eventually crashing the target into a skid. After some exchange of gunfire with multiple cop cars, the suspects ran off and soon split into two directions. West and Lopez tracked one onto a city bus, where West created a distraction until Lopez could squeeze off a kill shot. Nolan and Russo meanwhile chased the other guy into a backyard shed. Nolan talked the suspect into surrendering before SWAT arrived to turn him into Swiss cheese. But just as the guy started to emerge, hands in the air, Russo gunned him down. Russo claimed she saw him reach, but Nolan later said to Bishop he didn’t think that was the case. Bishop said that Russo likely made the prudent call in the name of a greater good, especially since the guy could have been infected himself.

The next morning, after Bradford had been dosed with an experimental cure, he and Chen emerged from the quarantined house, where Nolan and the others cheered their safety. But no sooner did Bradford shoot back some snark at his pals did a look of weariness wash over his face, and he collapsed to the ground. Annnnnnd… that’s the end of Season 1!

Do you think Bradford was suffering from symptoms of the virus? Or was he felled by a bit of PTSD after watching that infected man violently waste away? And will we ever get a Season 2 to know for sure?