It’s nearly harvest time for The Farm on Riverdale… but what does the cult’s charismatic leader Edgar Evernever want, exactly?

Chad Michael Murray — who rose to fame playing a teen himself on The CW’s One Tree Hill — recently made his Riverdale debut as Edgar, and while The Farm is slowly tightening its grip on the town of Riverdale, bringing key characters like Kevin and Cheryl into the fold, its leader’s ultimate goal still seems murky… even to the actor playing him. Edgar is “a great enigma,” Murray admits to TVLine, noting that when it comes to cult leaders, “there’s this big giant question mark that always hangs over their head… It’s what we don’t know about them that’s what I think is fascinating.”

In preparing to play Edgar, Murray decided that “he must have the most unbelievable gift of gab, he must have a charm and charisma that is second to none, in order for so many people to hang on every word.” So he studied infamous killers like Ted Bundy and Charles Manson, asking himself: “How would you get people to drink the Kool-Aid? You must have a very, very vast belief system, and a very compelling way to tell that story, and a very intricate charm to manipulate each and every person in a different way. You must be a great people reader.” 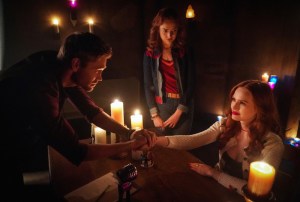 But what is he reading all these people for? Edgar “is a man on a mission,” Murray hints, and we’ll learn what that mission is soon enough: “Edgar and The Farm, they do have an agenda, and that agenda will be uncovered quite soon.” Plus, we’ll learn more about Edgar’s relationship with his daughter Evelyn and her “place in the entire operation” soon as well. But what about Evelyn’s mom? We haven’t heard anything about her yet, but is there a Mrs. Evernever out there somewhere? “Mrs. Evernever is to come,” he promises.

As for this Wednesday’s episode (The CW, 8/7c), “we are going to see Edgar and Betty sit down,” Murray teases, “and we are going to hear Edgar’s explanation for what The Farm is, and what the movement is about.” In fact, he may not be an enigma much longer: “He’s going to open up to Betty.”

Riverdale fans, drop your thoughts on Edgar Evernever and The Farm in a comment below.