Fans of Sara Lance aka White Canary will get double dip of the formidable femme this Monday when she appears on The CW’s Arrow (now airing at 9/8c) as well as DC’s Legends of Tomorrow.

“I know we did a Canary-esque episode in a previous season” — Season 2’s “Birds of Prey,” which pitted Sara (played by Caity Lotz) and Laurel (Katie Cassidy Rodgers) against the Huntress — “but we have been talking about a Birds of Prey-inspired episode for years, and have it really focused on the women,” showrunner Beth Schwartz told TVLine at WGFestival 2019. “I was very determined to make that happen this season.”

Setting things in motion for the female-centric hour is Laurel’s criminal past coming to light, and her being accused of murder. For nearly a full season prior to this, of course, the Earth-Two visitor invested much time and effort into passing herself off as her dearly departed Earth-One doppelgänger. That gambit didn’t fly at first with members of Team Arrow and namely Dinah, whose onetime beau was executed by Black Siren’s sonic cry.

Nowadays, though, “frenemy perfectly describes their relationship,” says Dinah’s portrayer, Juliana Harkavy. “Laurel has come a long way, but there’s always that little question between them, and that history.” 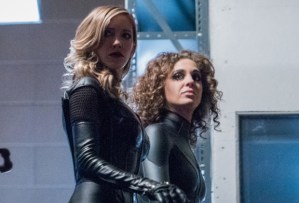 That complicated history will be agitated anew when Laurel’s public shaming prompts her to leap off the redemption train and launch a crime spree with onetime cohort Shadow Thief (guest star Carmel Amit). “Dinah, more than anybody, is not surprised to hear it,” Harkavy previews. “Because as much faith as she has put in Laurel changing, and as much as she tries to forgive her, there’s just nobody else she would expect this [reversal] to come from more.”

Although Harkavy affirms that Felicity (played by exiting Arrow vet Emily Bett Rickards) — who more than anyone has championed Laurel’s turnabout — “might get one or two ‘told you so’s” from Dinah, EP Schwartz says that Felicity will remain “pretty strong in her conviction of trying to redeem her. As much as Laurel has been there for her, she’s trying to be there for Laurel.” 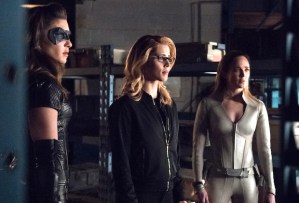 In a desperate bid to get through to her wayward friend, Felicity will recruit Sara Lance, who of course was sister to Earth-One’s Laurel and, in a small way, “shares” a dad with her doppelgänger.

“It was so fun getting Caity back,” raves Schwartz. “I told her I could not imagine this episode without her.

“She and Katie Cassidy are so good together,” the EP continues. “Because Laurel looks just like her sister and she carries that name, there are definitely some nice emotional moments between them. There’s also Laurel’s love for Lance. Even though he wasn’t her father, she had that great bond with him at the end of Season 6.” 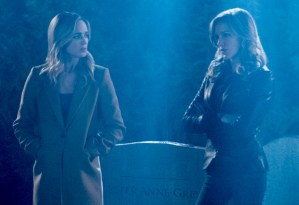 Dinah only briefly met Sara in last season’s finale, when Lance died. So when brought together in a big way by this cause, how do Canaries present and past get along? “The dynamic on set — and how it reads on film — was very strong and very fun,” Harkavy reports. “There was no sense of competition, it was all just a team. And I think we all work really well as a team. Our characters all have our individual strengths, and that was really highlighted.”

As one can glean, this Birds of Prey-inspired episode is a rarity in that the female cast is so heavily and near-exclusively played — even in the flash-forwards that include Dinah, Mia (Katherine McNamara) and Felicity. “We were excited before we started filming, but once we started going, every day we were like, ‘Why isn’t this the show?'” shares Harkavy with a laugh. “I mean, I love the boys but it was so nice just being with the girls for a while.

“It does change the energy on set on a really cool way which you don’t get to do experience much,” she explains. “It was a different dynamic, all-women. It was really awesome.”

Schwartz echoed that sentiment, saying that her “favorite part” of the episode “Lost Canary” is “having all the women in the forefront, and they sort of have each other’s backs. Instead of having them be against each other, they work together to try to help each other. You don’t get to see that very often, and that’s a very important message that I really wanted to have.” 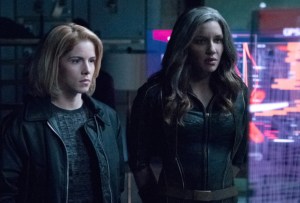 Looking to the future — literally, in teasing the 2040 storyline — Harkavy says that with five episodes left in Arrow’s penultimate season, “There are definitely some big things coming up,” including a couple of bombshell reveals and “some idea” of whether Future Dinah ever got her sonic scream back.

As for that older-age makeup….

“I am digging it! I think it’s taught me to embrace myself again” the actress declares. “It’s empowering to do all the fighting and stuff as a 50- or 60-year-old woman and still have that much strength. Usually superheroes are hot and young, so it’s cool to show an older version of Dinah still kicking ass!”