While you were busy catching up with your pals in Westeros on Sunday, American Idol continued its own game of thrones as the Top 14 fought to win over the voting public. And with four eliminations scheduled for Monday’s results episode, this was basically the calm before the Red Wedding.

Which singers successfully staked their claim to the Idol crown, and which ones couldn’t quite make it over the wall? Let’s break down all 14 of tonight’s performances and find out:

LAINE HARDY (Elvis, “That’s All Right”) | Seasoned like a fine roasted chicken, this self-proclaimed “bayou boy” was a no-brainer to kick off Season 17’s live performances. Honestly, Hardy was so comfortable singing this song and standing at the microphone, he almost looked bored at times. Katy Perry was right when she said he clearly knows his strengths, but I’d still like to see him step out of his comfort zone a little. Grade: B+ (Click here to watch!)

EVELYN CORMIER (Jimmy Eat World, “The Middle”) | Real talk, I gasped twice before Cormier even started singing: First, I gasped when she mentioned that she was on 90 Day Fiancée — which immediately answered every question I’ve had about her marriage — and again when I heard the opening guitar licks of this pop-punk classic. And the crowd seemed just as excited, matching Cormier’s energy and sending it right back to her. I’ll be honest: I wasn’t sure that such an aggressive song would pair well with Cormier’s airy vocal style, but as I was reminded tonight, she’s got range. Grade: A-

ALYSSA RAGHU (“She Used to Be Mine” from Waitress) | On an emotional level, this was a perfect choice; it was like Raghu was singing to her Season 16 self (even if the lyrics are very specifically about a pregnant woman trapped in an abusive relationship). And from a technical standpoint, it was just as perfect. The emotion, the drama, it was all there. Some of the biggest names on Broadway — including Idol‘s own Katharine McPhee — have performed this on stage, and I believe that Raghu did the apron proud. Grade: A

EDDIE ISLAND (Elton John, “Benny and the Jets”) | I only have two words to say right now: Haley. Reinhart. That growly goddess already gave us Idol‘s definitive version of this song, so why anyone would even bother trying to wow us with this is beyond me. Yet that’s exactly what Island did on Sunday, giving an energetic-but-uneven performance that fell victim to first-night jitters. You knew it was bad when the first thing Perry mentioned in her critique was how cool the hydraulics were. And speaking of the judges’ critiques, why was Luke Bryan so taken aback by Island’s jacket? Has he never seen Elton John’s wardrobe? Grade: C (Click here to watch!) 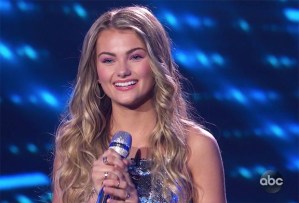 RILEY THOMPSON (Sara Evans, “Suds in the Bucket”) | Juliette Barnes, is that you? Not only was Thompson’s performance pure joy from start to finish, but she held out a handful of jaw-dropping notes that easily earned her a spot in the Top 10. Grade: A (Click here to watch!)

WADE COTA (Ray LaMontagne, “Trouble”) | After treating us to a history of his raspy voice — which apparently has roots in metal — Cota treated us to an intense, emotional performance of this ubiquitous folk song, which inspired Lionel Richie to give him a new nickname: “The Hammer.” Grade: A- (Click here to watch!)

DIMITRIUS GRAHAM (Ed Sheeran, “Perfect”) | Apparently it is possible for a performance to be very impressive and very disappointing, as we saw with this tragically uneven performance. Despite cranking out a few mind-blowing high notes, the vocals were inconsistent overall. It was a bold new arrangement of a song we’re all sick of hearing, so I’ll give him that. Grade: B- (Click here to watch!)

MADISON VANDENBURG (Alicia Keys, “Fallin'”) | If there was any doubt that VanDenburg was a gift from the Idol gods, tonight’s performance should have taken care of that. From her slick piano playing to the incredible control she displayed over her voice, she made me double — nay, triple — check to make sure she’s actually seventeen. Brava, queen. Brava! (I also appreciated that the judges finally agreed to put the Kelly Clarkson comparisons to rest. She’s her own star!) Grade: A+

JEREMIAH LLOYD HARMON (Elton John, “We All Fall in Love Sometimes”) | First of all, I’m glad “things are looking up” for the Harmons. Of this season’s countless sob stories, his speaks most directly to me. Speaking of sobbing, I Perry perfectly summed up my feelings when she told Harmon how proud she is of his success: “I’m just so glad, because you’re such a gift,” she said. “You’re a light to the world.” Honestly, I’m not even going to question Richie for saying that Harmon could potentially stack up against legends like Freddie Mercury. (Is anyone else hoping for a Harmon/Adam Lambert duet in the finale?) Grade: A+

UCHE (Bruno Mars, “Finesse”) | Whatever “it” is, Uche gave it to us tonight. All of it. Every last bit of it. His energy was electric, his dancing was on-point and his vocals were out of this world. You know what? This was so incredible, I’m going to do something I never thought I would, much less this early in the competition. I’m blessing Uche’s take on “Finesse” with my elusive double plus. Grade: A++

ALEJANDRO ARANDA (Drake, “One Dance”) | Just when I thought Aranda couldn’t get any cooler — poof! — he reveals himself to be a fly-ass DJ. Tonight, he parted ways with the “chill, acoustic vibes” he’s been giving us so far, opting instead for a full-on electronic experience. Did I totally get it? Not at first. But did I enjoy it? And do I respect the heck out of him for pulling off such a risky performance? Yes, and yes! Grade: A- (Click here to watch!)

ASHLEY HESS (Coldplay, “Fix You”) | Dearly beloved, we are gathered here to celebrate the blessed union of this singer with this song. From the stirring beginning to the bombastic finish, Hess navigated her way through this performance with the effortless balance of grace and power we’ve come to expect from this young Carole King. Grade: A-

LACI KAYE BOOTH (Blink-182, “Miss You”) | After promising America that she’ll try to be “less orange” — which sounds political but is actually about her spray tan — Booth blessed us with a stunning reimagining of an under-appreciated Blink-182 song. And just as the lyrics suggest, I suspect Booth will be the voice inside our heads all season. Grade: A+

WALKER BURROUGHS (“Climb Ev’ry Mountain” from The Sound of Music) | Holy unexpected song choice! Not that I’m complaining. Even Mother Superior would have approved of Burroughs’ interesting take on this musical theatre standard — and as you well know, she doesn’t approve of anything. Grade: B+ (Click here to watch!)

Which singers deserve to crack the Top 10? Vote for your favorite performances from Sunday’s episode below, then drop a comment with more of your thoughts.