If it looked like the Chilling Adventures of Sabrina stars were having a little too much fun with the supernatural shenanigans of Part 2, it’s because they were. From Sabrina’s fiery resurrection to Zelda’s own red wedding, the cast relished every devilish twist.

At least that’s the impression TVLine got during a recent visit to the Netflix series’ Vancouver set. Below, see what the cast told reporters about their storylines in Part 2, including one actor’s long-awaited playdate with the Spellman witches.

DARK SABRINA | Exploring Sabrina’s darker tendencies has been “fun” for Kiernan Shipka, whose mission remains “making her understandable, because she’s a complex character. …  Clearly, Sabrina’s made some mistakes, but at the end of the day, my main goal is to make her a person and a human being.” As for her co-stars, they just thought it was cool. “I mean, hellfire is … next-level s–t,” Chance Perdomo said. “You have to be one of the utmost powerful witches and warlocks to be able to do that.”

HARVEY, THE HERO | Fact: No one was more excited for Part 2’s human-witch team-up than Ross Lynch. “I’ve actually been wanting to work with all the witches in the story a lot,” he said. “I’d love for Harvey to have a scene with Father Blackwood. I don’t know how that would work, but I think it would be really fun. Harvey gets to actually go to the Academy [in Part 2] and gets to be the hero. He gets to save Sabrina, which is … fun.”

ZELDA’S WEDDING | Miranda Otto very much enjoyed the “cat and mouse” game Zelda played with Father Blackwood, one that eventually led to their unholy union, because it reinforced her character’s commitment to her family. “She’s really just after the power of being in the position of being the high priest’s wife, and everything that would ensue, and … trying to reinstate the Spellman family at the top of the covenant,” she said. “That’s her whole modus operandi.” Otto also acknowledges that in many aspects of her life, “Zelda’s like a politician … playing the long game,” so it really shouldn’t have been that surprising to see her named High Priestess at the end of Part 2 — even if she had to name herself.

ROZ’S SIGHT | “I really wanted to do that justice,” Jaz Sinclair said of Roz’s bout with blindness. “We rely so heavily on our senses, and trying to learn how to exist without my vision was definitely a little bit of an undertaking. The idea of having lost my vision and then getting it back is such like a profoundly moving idea to me, like the prospect of magic being able to bring your vision back. [It was] was a pretty emotional day.”

THEO’S TRANSITION | As much as Part 2 chronicled Sabrina’s transition into the magical world, another emotional story of change was happening for Theo back at school. “It’s been kind of indescribable,” Lachlan Watson said of the response to their character. “It’s something that I never really thought would happen. To be the change that I want to see has been very incredible and I’m super honored to be able to do that for people.” Added Sinclair, “We’re really trying to do it with care, really considering every step and every line. There was a bit where Susie talks to her dad and tells him that she wants to be Theo. Originally, the scene was shorter, and he was just like, ‘Okay.’ And Lachlan [Watson] had a conversation being like, ‘Hey, can we take our time with this? Maybe he’s not 100-percent sure, because that feels like more of an authentic representation to me.’ I really respect that both Roberto [Aguirre-Sacasa] and Lachlan are really taking the steps slowly and with care in regards to that story.” 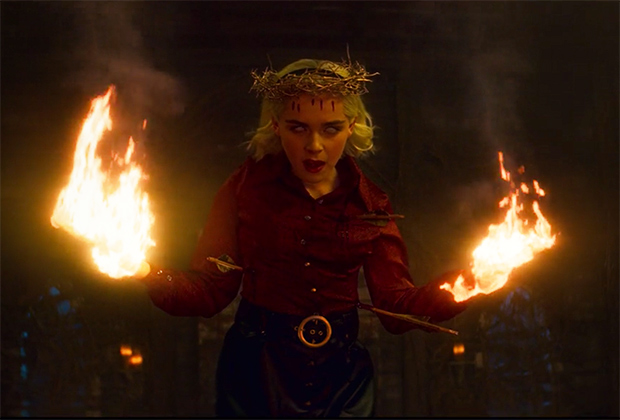 AMBROSE’S IMPRISONMENT | “I think it’s quite telling of who Ambrose is,” Perdomo said of the “tenacity, audacity and endurance” his character displayed during his incarceration. “Ambrose has been through all manner of s–t in his life, and he endures it all. All the pain, all the suffering, all the love, all the heartache, he endures everything. So the Vatican plot would be no exception. He took the fall, and he’s going to consistently take the fall. Otherwise, all of the suffering that has come because of it would have been for completely nothing. I suffered for 75 years. I might as well suffer 25 more.”

What was your favorite storyline in Chilling Adventures of Sabrina Part 2? Browse our gallery of the 10 biggest WTF moments — you can click here for direct access — then drop a comment with your thoughts below.