THE PERFORMANCE | The interesting thing about Good Girls — and make no mistake, now midway through Season 2 (and headed for a Season 3) it has evolved into a darkly interesting drama — is how the three central characters each are handling their new lot in life, as unlikely criminals. Christina Hendricks’ Beth calls the shots, while Mae Whitman’s Annie is a bit of a loose cannon. And then there is Retta’s Ruby Hill, who though very much a partner in this razor’s edge-walking enterprise always seems much more attuned to the risks they are taking.

It is because of that quality that a simple lasagna was poised to be so explosive. When Stan got manipulated into inviting FBI Agent Turner over to sample his wife’s specialty, Ruby was gobsmacked by the prospect. “Have you seen any episode of Columbo, like, ever?” she asked her husband. Fetching and sliding a prepared lasagna across the counter, she told a confused Stan, “This is me not doing life without parole.” Adding a bag of dinner rolls: “These are my children not dressing up on Christmas to visit me in prison.”

Problem solved? Far from it, Ruby realized the following night, when she came home to find Turner seated at her dining room table. Conveying Ruby’s tension, Retta seemed to take not even half of a breath in the moments that followed, as pleasantries were exchanged, half of them laden with taunts — such as when Turner explained his decision to bring over dinner, saying, “It’s payback time.”

At the end of the night, Ruby, alone with Turner, did her best to make small talk. But then the G-man dropped the hammer — “It’ll be worse for him [if you get caught]. You get that, right?” You could feel the dryness in Ruby’s mouth as Retta came back with a weak, “Sorry…?” All cards were all on the table, and the next morning Ruby slipped over to the FBI to turn herself in, but only if lawman Stan is kept out of it. As tears rolled down her face, Ruby learned that she’d actually be fine… since it’s bestie Beth they’re after. 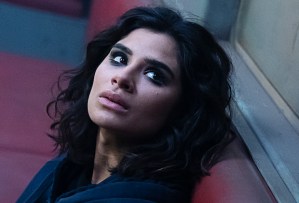 HONORABLE MENTION | With Doom Patrol‘s first eight episodes, Diane Guerrero made Jane an engrossingly complex TV character. But in “Jane Patrol,” she did yeoman’s work. As we and Cliff ventured to the Underground where Jane’s personalties dwell, Guerrero had the opportunity to not just play multiple (if not quite 64) roles, but also to do some deep character work. Eventually, Jane’s journey led her to her tweenage self, at the time she was being molested by her father. “This is where I began, isn’t it?” she sadly noted. To wee Kay, she said, “I don’t know who you need me to be…. I don’t know where to turn, or who I can trust. I’m trying, but I don’t know if I want to try anymore.” On that note, Jane surrendered herself to the ominous Well, but with Cliff’s encouragement found the fortitude to vanquish her monstrous Daddy, bellowing: “I am not afraid of you! I… am not… afraid!” 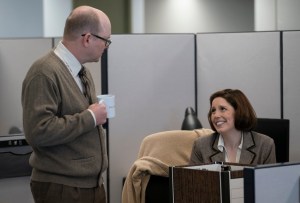 HONORABLE MENTION | Mark Proksch has been a hilarious early standout on FX’s What We Do in the Shadows as lethally boring “energy vampire” Colin Robinson, and he met his spirit-draining match this week in SNL alum Vanessa Bayer, who guest-starred as Colin’s new office mate Evie. She’s an “emotional vampire,” you see, sapping her co-workers’ will to live with endless sob stories about her cancer-stricken cats, and quickly became Colin’s chief competition. The two battled it out for office supremacy in a gloriously ridiculous psychic fight before realizing they could sap even more energy if they worked together. They made a truly formidable comedy duo: Colin has been Shadows‘ stealth MVP so far, and we’d love to see Bayer stick around, too — even though their poor co-workers probably wouldn’t survive it.