The queens got extremely catty — and a little bit corny — on Thursday’s episode of RuPaul’s Drag Race, which began with some good ol’ fashioned boobography. (Speaking of which, we’d like to preemptively thank Ru for providing us with an addition to our 2019 TV Dictionary.)

This week’s mini challenge gave the remaining nine queens 20 minutes to strap on some quick “bodacious drag” for one of the franchise’s classiest events to date: a “slow-mo, jugs-a-jiggling” potato sack race in which speed didn’t matter quite as much as… bounce. In the end, Nina Breast and Shuga T–ts bopped their way to the top, sharing the victory and earning $2,500 for literally jumping up and down and shaking their fake boobs.

Here’s hoping the Emmys choose to air this shot of Plastique Tiara when Drag Race snags its next nomination:

If you enjoyed that glorious nonsense, you probably also relished this week’s maxi challenge, which transformed the ladies into RuPaul’s Pumpkin Pies, a line-dancing country girl group. No one was particularly giddy about the idea, but once guest choreographer Alyssa Edwards got involved, everything *ahem* clicked into place.

But even the joyous presence of a Drag Race legend couldn’t stave off a little drama, especially between — of all people — Silky Nutmeg Ganache and Yvie Oddly. When Ru quizzed Silky about which queen deserves to be sent home, she didn’t hesitate to nominate Yvie “because she’s hurt and we don’t have time for that.” Yvie took this as a cop-out answer, accusing Silky of avoiding having to own up to disliking her. “I’m going to send that bitch all the way to Denver,” Silky promised.

The queens also brought that drama to the runway in the form of fierce, farm-fresh frocks, some of which looked good enough to eat. I was all about the bright colors in Yvie’s “Hawaiian fall goddess” look, I loved Brooke Lynne Hytes’ butt-baring denim and I was stunned by Plastique’s feathery, flowery dress — the last of which inspired the judges to give Plastique her first well-deserved maxi win. (For the record, I also appreciated Nina’s head-to-toe corn look. It wasn’t amazing, but it fit her personality, OK?!)

Unfortunately, this week’s runway wasn’t without a few fails. Ra’Jah O’Hara, for example, was accused of basically giving us a drag version of Groot (which is a bad thing because…?), while A’Keria Davenport’s denim look “gave the judges the blues.”

The bottom two queens faced off to the tune of Sheena Easton’s “Strut,” with Ra’Jah being sent home. Third time’s the charm, I guess. 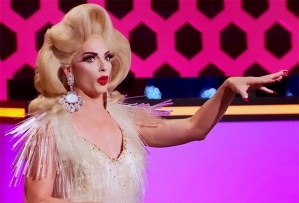 * I feel like Alyssa told the queens everything the viewers have been thinking all season, so I really appreciated her visit this week.

* How do we feel about this Yvie/Silky nonsense? My gut tells me to side with Yvie, especially after watching her volunteer to assist Vanjie in the workroom, but my heart wants everybody to just get along, damn it!

* Speaking of drama queens, I’m even more over Ra’Jah than I thought possible. Nina had the correct response to Plastique’s emotional chat with Ru — you know, empathy? — while Ra’Jah chose to sit back and question her with this convoluted read: “I just find it every strange that in a walkthrough about personality or lack thereof somehow correlates into your family now knowing you do drag and that’s the reason you have no personality?” Lame.

Vote for the queen you would have sent home below, then drop a comment with your thoughts on the episode. (And since Ru posed the question, tell us which of the remaining queens deserves to go next.)