Watch your back, Villanelle: There’s another lady killer on the loose this season on Killing Eve. (That’s a killer who’s also a lady, to be clear.)

In this Sunday’s episode (BBC America, 8/7c), Eve learns that a fresh string of dead bodies might be the work of a new female assassin: a stealthy killer dubbed “The Ghost” who slips in and murders her victims without being detected. That’s a sharp contrast to Villanelle’s flamboyant, look-at-me style of killing — and a reminder that maybe Villanelle isn’t as unique as she thinks she is.

“It felt like it seemed far-fetched that Villanelle would be the only female assassin,” new showrunner Emerald Fennell tells TVLine. Plus, Villanelle’s increasingly daring murders have “sort of made it impossible for her to do her job” at the start of Season 2, she notes, so someone else had to step up and pick up the assassination slack. 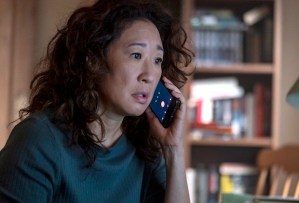 This new assassin puts Eve’s detective skills under a fresh microscope, Fennell adds: “She needs to discover if she’s an expert in general, or if she’s just an expert on Villanelle, and whether this is professional or personal.” At the same time, it puts pressure on Villanelle, who “needs to realize that maybe she’s not the only girl in town, either, and that actually, she’s disposable.”

“It’s a real foil” for Eve in Season 2, star Sandra Oh says of the new assassin. “It’s a way to keep Villanelle present without them actually being side-by-side.” In fact, Villanelle might end up getting jealous of all the attention this newcomer is getting from Eve, she hints: “It almost ends up being a romance triangle, because there’s another woman killer in Eve’s life.”