As Tuesday’s episode of The Voice dropped the curtain on Season 16’s Battles — or, as I think of them, the Wait a Minute, Did I Like This Contestant During the Blinds? rounds — four more singers were told to exit stage left. Or right. The direction didn’t really matter; they just had to exit.

More importantly, we got our first official information regarding the Live Cross Battles that are starting Monday (replacing the Knockout Rounds). Not only will these be inter– rather than intra-team sing-offs, but, as Kelly Clarkson tells us in the clip below, the contestants won’t learn the identity of their opponents until they are on stage. The winners of each Cross Battle will be decided by viewers, with the results being announced on Tuesdays, at which point the coaches will be allowed to steal one eliminated vocalist from another team and save one eliminated member of their own team.

What do you think? Are you down with the shake-up? Before the debate breaks out in the comments section, let’s go over the evening’s performances. 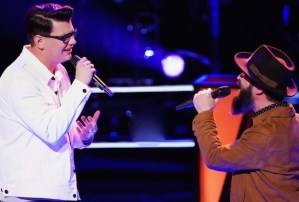 Team Adam: Andrew Jannakos (Grade: B-) defeated Patrick McAloon (Grade: C) on “Free Fallin'” | Ahead of practice, Adam said that Patrick’s vocal style was very precise whereas Andrew’s was more untamed. (Or had he said untrained? I should really watch with the subtitles on.) In the room, Andrew admitted that his Blind had been the first time he’d ever performed on a stage. After warning his duo that their Tom Petty classic was a “very hard sustained-note situation,” they proved him right by struggling mightily. Relatively inexperienced, Andrew found himself intimidated by Patrick, though the older guy wasn’t sounding as fantastic as his coach said. On stage, Andrew started off pretty strong and controlled. Patrick went airier and more affected with his vocal. When they sang the first chorus together, Patrick was easier to hear, but that wasn’t necessarily a good thing; he sounded kinda whiny. They weren’t awful, but this Battle wasn’t likely to get anybody saying, “OMG, The Voice is so much better than American Idol this season” or anything. 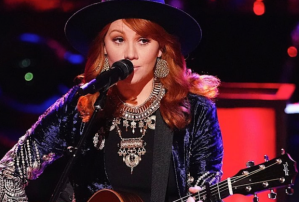 Team Blake: Selkii (Grade: B) defeated Cecily Hennigan (Grade: B+) on “Head Above Water” | Ahead of practice, Blake Shelton explained that he’d paired these two competitors because they both had singer/songwriter vibes to them. I was immediately worried, as I’d liked both of their Blind Auditions and didn’t want to lose either of them. In rehearsal, Blake suggested that the Avril Lavigne song that he’d assigned them would allow them to show their range. Cecily’s approach was more melodic, Blake noted; Selkii, more angst-ridden. If teenage Cecily wanted a shot at the win, Brooks & Dunn suggested that she’d want to turn up her own angst, too. Blake thought the winner would come down to which of them was more “believable” on the song. When the teammates took their places under the spotlight, Cecily looked nervous from the get-go, but she sang like a dream — clear and beautiful. And she pulled out more of a rock edge than I expected her to be able to. I couldn’t make out all the words that Selkii sang, but her voice was certainly impressive: forceful and emotional and rocky (which seems more like her default than Cecily’s). They were both good, but for my money, Cecily was better. 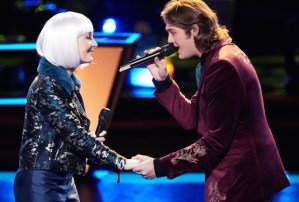 Team Blake: Carter Lloyd Horne (Grade: C) defeated LiLi Joy (Grade: D) on “I Got You, Babe” | In a blessedly abbreviated Battle, Carter and LiLi mangled Sonny and Cher’s classic. From what little we heard, though, Carter flailed outside his country comfort zone but was still closer to on pitch than wiggy LiLi.

Team Kelly: Karen Galera defeated Alena D’Amico on “Imagine” | We saw so little of this Battle that I couldn’t even assign grades. But recalling how enamored of Karen, and of having a bilingual artist, Kelly was during the Blinds, her jettisoning Alena wasn’t a big surprise. Plus, she mentioned here that she went with the singer who she felt could better handle the nerves that would be amped up going forward.

Team John: Kayslin Victoria (Grade: B) defeated Oliv Blu (Grade: B+) on “Location” — Oliv stolen by Blake | In rehearsal, Khalid explained to a starstruck Kayslin and Oliv that he wrote the song they were performing in the shower when he was in high school. “Make it your own,” though, he advised. Kayslin impressed her coach with her confidence; Oliv, with her song styling. But the latter had enough trouble hitting a high note that John advised her just not to go for it. Still, she seemed to flourish when Khalid riffed with her. In the moment of truth, Oliv came out swinging, looking and sounding like she was totally feeling the song. Kayslin had a little pitch problem early on and came off more like she was performing in a school talent show. By the second verse, though, she was in the zone. For most of the song, I thought I preferred the richer, deeper tone of Oliv’s voice. But by the end, I was kinda Team Kayslin. She was vivacious and had gotten so much right that that little bit of pitchiness toward the beginning was long forgotten.

So, are you satisfied with the Top 32? And what are your thoughts/concerns about the Live Cross Battles format? Before you hit the comments, vote for your Night 4 favorite from the Battles in the poll below.