The Bold Type wasted no time revealing which fella Jane chose during Tuesday’s Season 3 premiere. So was it sweet Dr. Ben or charming Ryan (aka Pinstripe) with whom Jane was getting it on in the episode’s opening minutes? Oh, come on, you totally know Jane and Pinstripe’s chemistry is undeniable!

Below, star Katie Stevens explains why Ryan is the right guy for Jane and previews the challenges ahead for the new couple, as well as some very sweet moments. The actress also pitches a crossover with one of her fave shows, Freeform’s Good Trouble.

TVLINE | You get the season premiere script, and within the first couple of pages, you know Jane has chosen Ryan. What’s your reaction?
[Laughs] Well, I actually knew that that was going to be the situation when we finished Season 2. So I was just very excited. It’s been a fun journey of having people commenting on who they think Jane’s going to pick and who they want Jane to pick, and most people are Pinstripe fans. So I’m excited for everyone who was hoping for that, and for me, because I love Dan Jeannotte [who plays Pinstripe]. [Laughs]

TVLINE | Did you have a feeling when they first introduced Pinstripe that he was going to stick around longer? Or was he originally just supposed to be a short arc?
I’m not sure. Honestly, I feel like if anybody else were to have played him, it might not have gone that way, because I think that the intention is always to showcase dating life and all of that on TV shows. But Dan and I just have such a great rapport and chemistry with each other that I think the writers just really enjoyed writing for us and enjoyed exploring what that relationship was going to look like. And I love that they explored somebody who was kind of a player and somebody who was a little bit more uptight… It’s so easy, a lot of the time, to showcase dating and show people dating around all the time, but there also are people in the world who are serial monogamists, who don’t like to just be hooking up with people and leading that kind of life. So getting to showcase that story, for myself, was really fun to explore, and the dynamic of somebody who is a serial monogamist dating a serial dater.

TVLINE | What makes him the right guy for Jane at this point?
At this point, I think what ultimately made Jane choose him is that he understands her career. He supports her. He pushes her where she needs to be pushed, takes her outside of her comfort zone, challenges her, but is also really supportive and caring and loving. He has continually showed up for her, and I think that was something that she was scared that he wouldn’t do. So that’s why she was so hesitant for so long, but he had proved himself over and over and over again to her to where she, finally, was able to kind of let her guard down and allow herself to trust him. 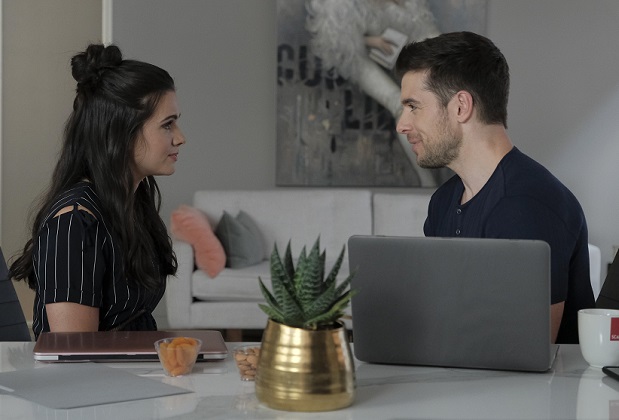 TVLINE | As you mentioned, he is a serial dater, maybe a commitment-phobic guy. What are the biggest issues or challenges that they are going to face as a couple this season?
I think that, at this point, they’re on a level field. He is kind of over the serial dating, and what’s so fun to explore is like, how do you take somebody from that and have them commit, and what does that commitment look like? I’m really excited because we have a lot of sweet things coming up for them, and it’s nice to see that different side. It was so easy to kind of show Pinstripe as, like, a player, but now we get to see him as a boyfriend, and we get to see Jane give herself over to a relationship, too, because I think that Jane has been a little apprehensive in the past. Just watching two people who were too scared to give it a shot finally giving it a shot, I think, is really fun for viewers to see.

TVLINE | That scene at the end of the season premiere where he’s like, “I don’t know what I did to get so lucky” was so sweet.
Isn’t it so sweet? And also, that was such a vulnerable thing for me to film, because I was honestly, like, basically naked filming that scene. But I’m very lucky to work with somebody who’s so respectful and kind. He protected me throughout that whole scene, making sure that I was OK and comfortable. He’s just a really great scene partner. So I’m really happy with how that scene turned out, because we both had to just kind of be free and give ourselves over to the experience, and yeah, I think it turned out really cute.

TVLINE | There are a lot of sexy times this season. Right off the bat in the season premiere, you have Jane and Pinstripe, and Sutton and Richard getting it on. Is this a sexier season than the previous two?
I think that we always try to push the boundary with the sexy. Sometimes, you get told to kind of rein it in, but I like that, on our show, we kind of give ourselves over to that, because that is really what your 20s look like. You’re kind of figuring out who you are and figuring out your sexuality, and your likes and dislikes in dating people, and I think that that goes hand-in-hand with it. So it’s important that we show that, and I think that our show intends to be sexy. I think we do a good job of making it tasteful, though. 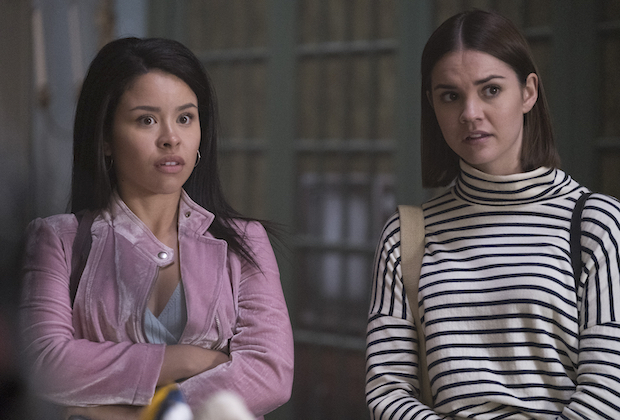 TVLINE | I saw that you’ve been tweeting about Good Trouble. It seems like you’re a genuine fan of the show.
Yes. And I’m also friends with a lot of people on the show. So I always love when my friends are doing well, and the show is so good, so I’m so happy for them.

TVLINE | Any chance that we could see you on Good Trouble? Is that something you’ve talked to them about?
Listen, I have been pitching both shows. We’ve both been like, “Yes, we need a Bold Type/Good Trouble crossover,” and I was talking to them. I was like, “Jane could come and write a story about The Coterie, and then she winds up loving it so much that she winds up living there.” [Laughs]

TVLINE | I love it. I feel like the two shows could lend themselves pretty naturally to a crossover. They’re set on different coasts, but they’ll find a way around it.
Or Callie starts working for legal with Richard at Scarlet?

TVLINE | Or if not a crossover, you could just come in and play a new character.
I think it’s more difficult to do that when you’re a series regular on a different Freeform show. It’s hard to cross over because I think everybody watches Freeform, and they’ll just be able to see me as Jane. So I think it would be more fun to do like a two-hour episode where we have all of our storylines cross over. Maybe Kat helps Alice in discovering her sexuality further? [Laughs]

Bold Type fans, grade the season opener below, then hit the comments with your thoughts on Jane’s choice!