From the moment it was first announced, FX’s flashy new miniseries Fosse/Verdon — debuting Tuesday at 10/9c; I’ve seen five of the eight episodes — seemed to come with its own pre-written Emmy campaign. It has all the trappings of the kind of Hollywood biopic that usually rakes in awards: spot-on celebrity impersonations, copious amounts of drugs and booze, a time-spanning narrative that requires a heavy slathering of old-age makeup. But despite stellar performances from its two lead actors, it never really breaks out of that established biopic framework enough to tell a fresh and compelling story. It knows all the steps, but can’t find a way to bring any new life to the dance.

Oscar winner Sam Rockwell stars as legendary Broadway choreographer and director Bob Fosse, and Fosse/Verdon opens with him directing the film version of Sweet Charity, which turns out to be a costly flop. He rebounds, though, to direct Liza Minnelli in Cabaret and win an Oscar, a Tony and an Emmy in the same year. Oscar nominee Michelle Williams co-stars as Fosse’s equally legendary wife, Tony-winning actress Gwen Verdon, who is actually his secret weapon, working as a key (and uncredited) collaborator on his most famous productions. But even she gets fed up with Fosse’s rampant infidelity: When he asks her to fly to Berlin to help him on the set of Cabaret, she pointedly asks, “Am I going to be unhappy when I get there?”

Die-hard theater nerds will appreciate Fosse/Verdon as a richly detailed time capsule of 1970s showbiz, in all its kitschy glory: The vibrantly colorful recreations of classic Fosse productions are a treat to watch, and at times, it manages to capture the intoxicating highs of Hollywood success. But the narrative heart of Fosse/Verdon is the tumultuous relationship at its center, and all of its decade-skipping time jumps can’t do much to mask the foundation of well-worn biopic clichés it’s built on. It’s as if the characters are preserved in amber, speaking from a pre-ordained script. (Even Verdon complains in the middle of a fight with Fosse that she’s heard this dialogue too many times before.) 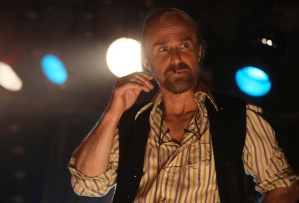 The biggest cliché of all is Fosse himself, the prototypical artistic genius whose talents outweigh his glaring flaws. He’s a temperamental perfectionist, raging against studio bean counters; he’s a hopeless drug addict, strung out on a prodigious array of uppers and downers; he’s a scared little boy, in trite flashbacks to him tap-dancing for his drill-sergeant dad. It’s Tortured Artist 101, and it’s all too by-the-numbers to provide any insight. Plus, these days, Fosse’s “womanizing” ways stick out like a sore thumb. (He nearly forces himself on one of his dancers, and when she turns him down, he replaces her in a musical number, saying coldly, “She doesn’t know how to take direction.”) Fosse/Verdon never fully grapples with the consequences of his monstrous behavior, and too often lets him off the hook. Daughter Nicole Fosse is a producer here, and at times, the series plays more like a child’s fuzzy, nostalgic recollection of her parents than a clear-eyed portrait of two industry giants. 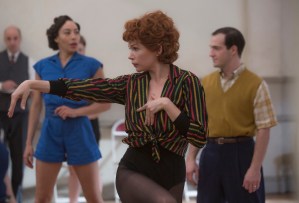 Thankfully, Rockwell and Williams are so damn good, they almost make you forget you’ve seen all of this a thousand times before. Rockwell beautifully captures Fosse’s tired eyes and ever-calculating mind — and he’s surprisingly fleet of foot, too. Williams positively transforms as Verdon, with a breathy, old-Hollywood voice and placid smile that recall Katharine Hepburn. In fact, I wonder if Fosse/Verdon would have been stronger if it had focused on her. (Verdon/Fosse, perhaps?) Verdon struggles to find good roles after her Broadway glory days have faded, and there are shades of FX’s previous Feud: Bette and Joan in her desperation to hang onto the spotlight.

But that comparison gets at Fosse/Verdon‘s fundamental flaw: It feels like a season of Feud… except one that’s drained of all the signature Ryan Murphy flair that make his shows worth watching. I can’t help but think that Murphy would sink his teeth into a story like this and come away with more profound conclusions than “showbiz is tough” and “infidelity is bad.” Rockwell and Williams are shoo-ins for Emmy nominations this summer, it’s true, but the material they’re given here never quite rises to meet their level.