For the first time in 17 seasons, Ryan Seacrest called in sick to American Idol on Monday, forcing mentor Bobby Bones out of the wings and into the spotlight. (Bones tried to play it cool, but let’s be real — he’s been ready to give Seacrest the Nomi Malone treatment since Day 1.)

Even without Seacrest on hand to incite panic, Monday’s Idol remained a dramatic two-hour experience, which ended with the elimination of three more singers… and the official reveal of Season 17’s Top 14. But before we find out which contestants are proceeding to next week’s first live episode, let’s break down all 10 of the evening’s all-star duets:

Alyssa Raghu with Julia Michaels, “Issues” | Following the judges’ mixed response to her choice of a Paramore jam, Raghu chose to slow things down this week, joining Michaels on her smash hit. It wasn’t the easiest song to turn into a duet, but I enjoyed it for the most part. Raghu seemed to take Michael’s (and the judges’) critiques to heart and tried to find the emotion behind the song. (That said, there was probably a little more shimmying and blowing kiss to the audience than necessary.)
Grade: B (Click here to watch!)

Eddie Island with Lukas Graham, “7 Years” | Another singer who took his critiques to heart, Island agreed to drop his “exaggerated goofiness” in order to expose his “incredible vocal talent.” And that’s exactly what he did with this solid duet, even if he looked super awkward sitting with his arm around Graham on those steps at the end.
Grade: B+

Wade Cota with lovelytheband, “Broken” | Is it weird that I preferred Cota’s growly tone to the way frontman Mitchy Collins delivered the song? His signature sound fit this like a glove, even if it wasn’t necessarily meant to. I also enjoyed seeing him cut loose a little bit and enjoy himself after the performance; everything about him, from his story to his song choices, has been kind of a downer from him thus far.
Grade: A-

Ryan Hammond with Cynthia Erivo, “Hold On, I’m Coming” | This was among the weirder song choices of the night, but Hammond managed to ride the funky waves throughout, even if he didn’t necessarily embody any of that funk himself. I realize that this contradicts what I said about his last performance, but I kind of wish we’d gotten another ballad from Hammond this week; his voice with Erivo’s could have been heaven.
Grade: B+ (Click here to watch!)

Evelyn Cormier with Chris Isaak, “Wicked Game” | If your blurred your vision, this totally could have passed for a duet between Isaak and Lana Del Rey at… I don’t know, whatever the coolest award show is. (Kids’ Choice?) I can’t say I was ever wowed during this performance, but I enjoyed it. As Lionel Richie explained, the fact that Cormier was able to blend so effortlessly with someone whose style is as specific as Isaak’s was impressive enough.
Grade: B+

Logan Johnson with Julia Michaels, “What a Time” | After some less-than-encouraging words from the judges, Johnson has a lot to prove as he filled in for Niall Horan on this Michaels duet. His performance was a little on the reserved side, but the notes were there, and his confidence definitely increased as the song progressed. (But also, can you imagine jumping right into a duet with Michaels during your first-ever gig? Insane.)
Grade: B- (Click here to watch!)

Raquel Trinidad with lovelytheband, “Tiny Dancer” | Go home, song selector, you’re drunk. Seriously, in what universe is this a duet? (Pause. Deep breaths.) The fact that this performance was so enjoyable is a testament to Trinidad’s undeniable talent. I loved that she took every opportunity to showcase her bottomless bag of vocal tricks. (Those runs!)
Grade: A- (Click here to watch!)

Alejandro Aranda with Ben Harper, “There Will Be a Light” | The hats! The beautiful simplicity! Those harmonies! I defy you to find one thing you didn’t absolutely love about this fated pairing. This felt like we were just sitting in on two genuine artists having themselves a jam sesh.
Grade: A

Dimitrius Graham and Lukas Graham, “Love Someone” | I have a few questions about Graham’s footwear tonight, but I wouldn’t change a thing about his duet with… Graham. (You know, this might get confusing.) The two singers formed an immediate bond when they met, developing a chemistry that came through in their stunning, stirring harmonies.
Grade: A

Jeremiah Lloyd Harmon with Cynthia Erivo, “Time After Time” | Raise your hand if you’re surprised that Idol saved this pair for last. (Oh, nary a hand in sight? I thought as much.) Anyway, this was an incredible duet, and I can’t say I’ve ever heard a better performance of the classic Cyndi Lauper tune. (Feel free to correct me. There’s so much media out there!) I also loved watching the judges react to Erivo. That level of sheer talent and overall splendor can be a lot for newcomers to handle.
Grade: A

With Seacrest on the mend, the responsibility of asking Kieran Healy to dim the lights fell upon Bones, as the seven safe singers were revealed in the following order: Evelyn Cormier, Dimitrius Graham, Jeremiah Lloyd Haron, Alyssa Raghu, Wade Cota, Eddie Island and Alejandro Aranda. 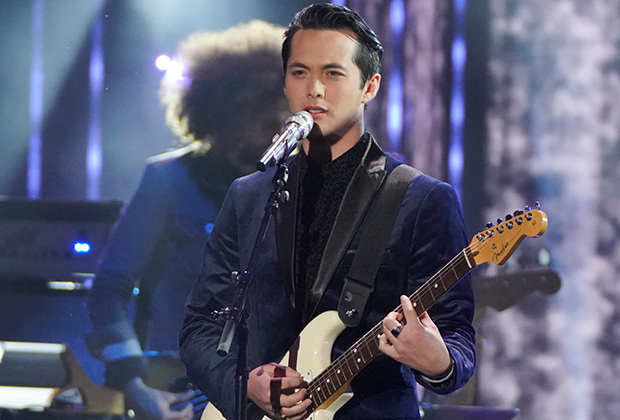 This means that Ryan Hammond, Logan Johnson and Raquel Trinidad have all reached the end of their Idol journeys. (I might dropped Raghu in favor of keeping Trinidad, but for the most part, I accept and approve of these decisions.)

Do you think the right three singers were sent packing on Monday? Cast your vote in our poll below, then drop a comment with your thoughts on Season 17’s Top 14.