After four seasons of romantic misadventures, Rebecca Bunch is following her heart… onto the stage of an open-mic night at a West Covina bar.

Friday’s Crazy Ex-Girlfriend series finale opened on Valentine’s Day (natch), with Rebecca dreaming of what her life would be like if she picked Greg, Nathaniel or Josh. In each vision, though, Rebecca eventually got the same “empty, sad look” on her face. When the real Rebecca demanded to know why she’s not happy, the dream Rebecca told her, “The problem is, you don’t know who you are.” Rebecca turned to Paula for help and sang out her frustrations in an “11 o’clock number” where she reprised all of Crazy Ex‘s theme songs and a half-dozen other favorites, ending with the classic “You Stupid Bitch.”

But this time, Paula asked her where she went off to just then in her mind, and Rebecca confessed: She imagines herself in musical numbers during big life moments. She even took Paula to her alternate musical world, and Paula told her it’s actually beautiful. In fact, she encouraged Rebecca to start writing her songs down, as a way of figuring out who she is. So Rebecca dumped all three guys and focused on her new love — music — learning to play piano and sing, and writing down all the songs in her mind. A year later, she invited all her friends to that open-mic night to hear her sing for the first time. “I came to this town to find love… and I did,” she told the crowd (including Josh, who has a new girlfriend) before sitting down at the piano. “This is a song I wrote,” she declared, just before we cut to black.

After Rebecca’s “I choose me” moment, we had a lot of questions, so we turned to executive producer Aline Brosh McKenna, who co-wrote the finale with star Rachel Bloom and directed it as well. Read on to learn which guy might have been the best match for Rebecca, if she was going to choose… and when we might expect to see that Crazy Ex-Girlfriend stage musical. 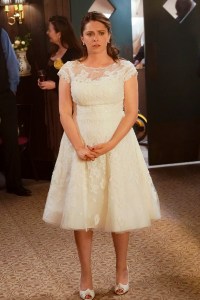 The final scene was planned from the very beginning of the series.
“I was cleaning out my office, and I found the notebook that Rachel and I took around to pitches, and ‘This is a song I wrote’ has always, always been in there… Not all the details were worked out. But the very last thing she was going to say, and where she was going to end up, and that she was going to have what seemed like an ideal romantic opportunity but find this other thing, [was always in there]. It’s always been a search for identity, because she’s someone who tries on these other disguises. So her figuring out what her passion is, and what she needs to pursue and what she loves and what she wants to do with her life, was always the primary goal.”

The finale is a rejection of the romantic comedy idea of finding “the one.”
“What we wanted to do with the guys is show that they’re all very viable, that you’re gonna meet lots of people who you could have great relationships with. There is no ‘one.’ The thing we talked about a lot was trying to dismantle the idea that there’s one person, that there’s a puzzle piece. Because I think that’s a very damaging idea for people. The fact of the matter is, if you’re making good choices for yourself and you know who you are, you’ll meet lots of great people, and then you’ll pick the one who matches up with you in terms of values and timing.”

“I think the idea that it’s destiny, and there’s a happy ending and there’s a kiss and then you’re all set, is not a good message, actually, for women or men… I always dislike things like Cinderella, where she sees him from across the room and, all of a sudden, they’re in love. Because I think most of us are not pretty enough for that to happen, thank God. I think those kind of instant physical things are the worst, and really fizzle out the most. I always felt like in Cinderella, like, ‘You haven’t f–king talked to her. You don’t know anything about her.'” 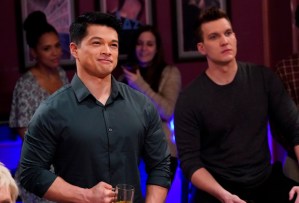 But Rebecca’s choice doesn’t mean she might not end up with one of those three guys in the future.
“Yeah, maybe! Once you’ve sorted out your own situation, then it’s sort of a question of who is where, and how it works out, and that’s why we show some of the other single guys that she’s met over the course of the series… There’s a world where, two years from now, she bumps into Nathaniel, and that works out. Or who knows what happens with Josh? That’s sort of not the point.”

In fact, Greg might be the best suited for Rebecca of the three.
“She spends the most time explaining to Greg what happens, and that’s because their date at the end of [Episode 16] was probably the most groundedly connected, and so she felt like she owed him a little bit more of an explanation. And he’s the one who’s the most distressed, really. Nathaniel kind of knows it’s coming, and kind of knows that the barn and the ring is not what she wants, so that’s why Greg gets a little bit more of an explanation than the other guys. [But] she wasn’t leaving any of them for the other ones.”

And yes, even the show’s writers had their own (strong) opinions on who Rebecca should end up with.
“A hundred percent. Definitely, at different times, people in the writers’ room have rooted for different things, and Rachel has, too. The actors who play those three guys are competitive, which is funny. I think we really got Josh to a great place, from being a complete cipher like he was in the beginning, which was just an object for her to project on, to a guy who’s trying really hard to figure himself out and has really come a long way. They all really have come a long way, as she did. She’s sort of that pebble in the pond. The reverberations of her journey of self-discovery has really affected all three of these guys in a different way.”

They deliberately chose to have Rebecca wait a year to share her music.
“We didn’t want her to say, ‘Oh, I want to do this thing, and now I’m all set.’ We wanted to show that she’s been spending a year actually trying to do this thing that she’s not that innately talented at. Which is, for us, another very important theme: She loves this thing, and it’s something she’s secretly wanted to do, but she’s going to be terrible at it for a while… You can see she’s probably better at some things than other things. But if she’s going to write songs, she’s going to have to learn how to sing serviceably, which she obviously is still working on. So [we’re] not imbuing that with any romantic magic, either. That’s why we needed that time jump.” 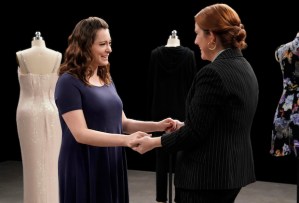 The finale’s “11 o’clock number” was a major turning point for Rebecca…
“That came from Rachel wanting to do a song that sort of summed up her experience, and the theme of identity was kind of emerging as we were working on the episode, actually. So that idea of all the different selves that Rebecca has been, they’re so clearly manifested in the songs and in the costumes. 11 o’clock numbers are the pinnacle of frustrations… It’s like a last-minute panic number. It’s a big climactic number, but there’s always more resolution to come. Actually, when we wrote it, we actually had it further back in the script, but then we moved it sooner, so that you could see what her issue was: ‘What do I do with all of this?'”

… and it was crucial that Paula was the one to help her see that.
“That was a scene that we wrote that we really wept through: that scene at the end when Paula says, ‘This is what you should do. This is not dumb.’ It comes full circle, literally, from the scene in the pilot, and for me, it’s why Paula is in the show. Paula is the one in the beginning who’s saying, ‘You should be with Josh.’ She’s the ultimate shipper. She needs that. She hates Greg. She’s really involved with Rebecca’s personal life because she has her own unfulfilled romantic urges. So she’s pushing her and pushing her, and then for her to come around and be the one to say, ‘No, you should do this. This is not dumb. This is meaningful and special. You loved writing that song, and here’s a pen.’ I think that gives their whole romance a reason for being.”

A Crazy Ex-Girlfriend stage musical might still be coming… but not anytime soon.
“Honestly, we made the finale, and we did a concert special, and a documentary, which is insane. So yeah, Rachel and I haven’t had a conversation of more than five minutes about the musical. The Mean Girls musical came out, I think, fifteen years after the movie. It’s fine. You’ll see it when you see it.”

Alright, Crazy Ex fans, it’s your turn: Grade the series finale in our poll below, and then hit the comments to share your thoughts.