After Crazy Ex-Girlfriend takes its final bow this week, the cast is coming out for one last curtain call.

Friday’s series finale (The CW, 8/7c) will be followed by “Yes, It’s Really Us Singing: The Crazy Ex-Girlfriend Concert Special!” a live performance taped last month at Los Angeles’ Orpheum Theatre, with the cast taking the stage to sing a selection of Crazy Ex tunes. Lots of fan favorites will be in there, from “Let’s Generalize About Men” to “Gettin’ Bi” to “You Stupid Bitch,” but condensing four seasons of musical comedy down to less than an hour was a daunting task indeed.

“Everyone’s got a favorite song,” Donna Lynne Champlin, who plays Paula, told TVLine during a recent rehearsal. “The musical canon of this show alone has so many solid hits. The only way that they could do it was to do montages… which is super smart, because you get more bang for your buck.” So the concert special will feature condensed versions of many songs, grouped together by a shared theme or character. “We’ve separated it into six acts, and each act has its own sort of flavor.”

“You have to do the math of making sure people have moments to shine,” star/co-creator Rachel Bloom says. “Every series regular has a song to themselves.” She also warns that viewers shouldn’t expect the stage versions to perfectly recreate the elaborate music videos we saw on the show: “The music videos were the most polished versions of the songs, so I’m not interested in the prettiest, most polished versions of the songs.” Instead, she and the cast are focused on “breathing new life into it, bringing the songs to life in a new way.” 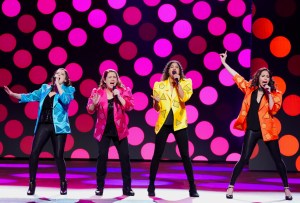 So the special ends up having “more of a stripped-down, concert feel” than the series, according to choreographer Kathryn Burns. In fact, the actors aren’t playing their characters; they’re playing themselves, singing the songs and saying one final thank-you to the show’s loyal fans. “It should feel intimate and breaking the fourth wall, and more like they’re getting to meet the fans and putting on a production for them.”

The themed medleys also allow the Crazy Ex cast to sing songs they didn’t get to participate in the first time around. “We don’t have additional chorus members,” Champlin notes. “We are all filling in the ensemble of everybody else’s numbers, and that is a hoot. All the stuff we always wished we were in, we’re in!” And it’s also a testament to the cast’s rock-solid chemistry, Burns adds: “Even though they’re all lead actors, they’re all helping each other backstage. There’s a true ensemble feel.”

Crazy Ex‘s cast is loaded with Broadway veterans that are used to hoofing it on a stage eight times a week… but not everyone was fully prepared for taking these songs out in front of an audience. “I’d forgotten what it’s like to perform live, and it’s hard as s—t,” Scott Michael Foster, who plays Nathaniel, admits with a smile. “I was like, ‘Oh my God, how do people do this for a living?’ It’s cool to sing and dance on camera. This is a beast. This is much more intense.”