We were promised a “darker” turn for Chilling Adventures of Sabrina‘s titular teenage witch in Part 2, and after watching the first hour, I’m wondering how much darker it can possibly get.

The premiere of Part 2 — which dropped in full on Friday — found Sabrina abandoning Baxter High to become a full-time student at the Academy of Unseen Arts, much to her Aunt Hilda’s dismay. Hilda even confided in Principal Wardwell that she fears Sabrina’s decision marked a “prelude to further, darker changes.” Chilling!

And because rocking the boat is among Sabrina’s favorite pastimes, she announced her enrollment by running for “Top Boy,” someone who serves as a liaison between the administration and the student body. The position, as its name suggests, is typically reserved for male students, with none other than Nicholas Scratch running as Sabrina’s sole opponent. As if Sabrina didn’t have enough working against her, she was also being hunted by three kings of hell who attacked her with hordes of rats, bats and flies, all eager to “feast on the flesh of a bastard witch.” Yummy!

When Sabrina accused Nick of conjuring them to force her out of the competition, he explained that he didn’t have the power to summon such creatures on his own. Instead, the two prospective Top Boys hijacked the final trial, calling forth the kings of hell to find out who sent them. Unfortunately, they insisted that they answer to no one, adding, “We wish death upon the half-spawn witch and the chaos she engenders. She must be stopped. The half-witch must not ascend!” Gulp!

As punishment for making a “mockery” of the Academy, Blackwood took Nick and Sabrina out of the running, instead bestowing the title of Top Boy upon… Ambrose? (Yeah, he was just as surprised as you.) The two losers celebrated their mutual defeat with a night on the town, though perhaps they should have paid a visit to Mrs. Wardwell’s house, where she and the Dark Lord were discussing Sabrina’s importance in his master plan. Yikes!

* While Sabrina was busy toppling the supernatural patriarchy, Susie was doing the same for mortals at Baxter High, trying out for the boys’ basketball team — though it took a little convincing on Principal Wardwell’s part to make that happen. Though she never announced her presence, Sabrina attended Susie’s tryout, whispering a few spells to make sure it was a success. Empowered by this rare win, Susie informed Harvey and Roz that he’d like to be addressed as Theo, a decision they supported. 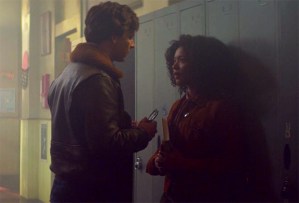 * Speaking of Harvey and Roz, we got a glimpse (via the Cunning) into their future, which apparently involves some against-the-locker kissing! During a recent visit to CAOS‘ Vancouver set, Jaz Sinclair told reporters that the Harvey-Roz pairing “kind of was a surprise,” but that the two are ultimately right for one another. “It almost feels like … an older version of Roz and Harvey come together, because their relationship dynamic is just so different than Sabrina and Harvey,” she said. Added Ross Lynch, “With Sabrina out of the picture, they realize they’ve always been really good friends, they’ve always had a good connection and they quite like each other.”

* Lastly, after being called a “wanton hussy” by that unimportant hater Shirley, Zelda sat Father Blackwood down to discuss the state of their literal affair. “I have no shame or regrets, but I must have clarity,” she told him. “Do you plan to make me your ‘Top Lady,’ as it were?” He gave her some B.S. explanation about how they need to keep up appearances, so she put a (temporary) kibosh on all things sexy and secretive.

Your thoughts on the premiere of CAOS Part 2? Theo’s announcement? Harvey and Roz’s relationship? Grade “Chapter Twelve: The Epiphany” below, then drop a comment with your full review.