Warning: The following contains spoilers for Thursday’s Season 10 finale of Will & Grace. If haven’t yet watched “Jack’s Big Gay Wedding,” you might want to RSVP no to this recap, at least until later.

In Thursday’s season finale of Will & Grace, the titular duo, as well as Karen, McCoy and Nikki set off for Spain to attend Estefan and “Jack’s Big Gay Wedding.” But the gang only made it as far as the airport before dagnabbit, their flight was cancelled. Short of a unicorn that doesn’t shoot cream out of its horn, what could be worse, right? And that was just the beginning of the drama in the comedy’s last episode of Season 10!

We joined the action already in progress at the airport, where Will and Grace narrowly — by which I mean not at all — avoided sparring over Noah’s absence. At the counter, Jack and Estefan were horrified to learn that their flight was delayed. After Karen attempted to flirt with the gate agent, as she now insisted she was a lesbian, the flight was cancelled. Nearby, Will learned from McCoy that he’d gotten a job offer in London, and they wondered whether they could make a long-long-distance relationship work. At least Estefan had some good news: He and Jack were gonna get married right there at midnight! “What, do you wanna have our honeymoon in the men’s room?” Jack cracked. Why not? Estefan replied. “That’s where we had our second date.” 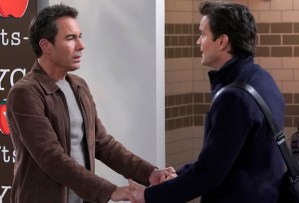 As Jack complained to Will, Grace and Karen, it occurred to him (eventually) that oh my Gaga, his officiant was in Spain. They didn’t have one! Grace suddenly realized that if they weren’t going to Spain, Noah could come to the wedding. While she went to call him, McCoy told Will that he’d said thanks but no thanks to the overseas job. Alas, Will had to insist that his beau not turn down his dream gig. Encountering Smitty at the bar, Karen was surprised to learn that she hadn’t set off his gaydar. “Now I’m exactly who I’m supposed to be,” she said. “I think.” Smitty suggested that maybe she wasn’t gay, she was just… lost. And for once, Karen didn’t find what he said uproarious. 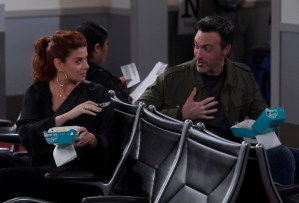 Talking with Will, Grace tried not to present the fact that Noah wasn’t coming to the nuptials, regardless of Spain being off, as being as sad as it was. You’re lucky if you get 60 percent of what you want in a relationship, she insisted. And no, she couldn’t do better. Au contraire, countered Will. “You deserve 100 percent of what you want.” Elsewhere, Miss Coco Peru lashed out at Jack for not inviting her to the wedding. Upon finding out that she was ordained, he and Estefan enlisted her to officiate. Mid-snack, Grace began hitting it off with a fella named Marcus (Veep’s Reid Scott), who was quick to let her know that he was unattached. He was off to globe-trot, having reevaluated his life. And before long, he had her thinking that maybe doing what she wanted when she wanted wasn’t such a bad idea. He even almost invited her to come along on his world travels. 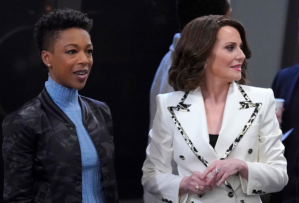 When Nikki arrived at the airport, Karen awkwardly recreated Ellen DeGeneres’ coming out in reverse by announcing over the P.A. system that she was straight. Soon, it was time for the wedding. Though Jack was unenthusiastic, likening it to the worst ceremony since Batman and Robin’s in that cave, the terminal actually looked pretty festive. “Mi amor, you look beautiful,” Estefan told his groom. “I know,” Jack replied. As for the vows… “You know me well enough to know that I have prepared nothing,” Jack admitted. But he’d been imagining this day for months, and “this is perfect,” he said — just as a flight was called, sending a bunch of travelers by.

While Estefan sang to Jack, McCoy bemoaned the fact that he and Will were going to break up and he’d have to go back to dating underwear models. “Unless… ” Will said. Unless what?!? Holy crap, Will proposed to McCoy, and he accepted. And while Jack didn’t take the spotlight moving off of him well, at least he still got to get married first. Off Will’s spontaneous move with McCoy, Grace told her bestie that he’d inspire her to take a chance, too. With Will’s blessing, off she went to get more than 60 percent of what she wanted. At the gate, her eyes locked with Marcus’, “Love Is in the Air” began to play, and the whole shebang ended with a fabulous dance number and enough confetti for six proms.

So, what did you think of the airport wedding? Will and McCoy’s engagement? Karen and Nikki’s breakup? Do you like Grace better with Marcus than Noah? Grade the episode below, then hit the comments.