In the Dark‘s Murphy Mason isn’t your typical CW heroine: She’s a disaffected, sardonic, kind of callous twentysomething who enjoys her booze and morning-after pills. And she also happens to be blind.

In Thursday’s series premiere, we meet Murphy (played by Shameless‘ Perry Mattfeld) mid-coitus, as her guide dog Pretzel watches nearby. “This dog is so weird. He follows me around everywhere. He’s like a stalker,” Murphy says dryly.

Afterward, Murphy sends her sexual partner on his way without so much as a cuddle. When he notes that she doesn’t have his number to text him later, Murphy responds, “I don’t understand why you don’t get what’s happening here.” She then cuts the line at the drug store to stock up on cigarettes and emergency contraceptives. 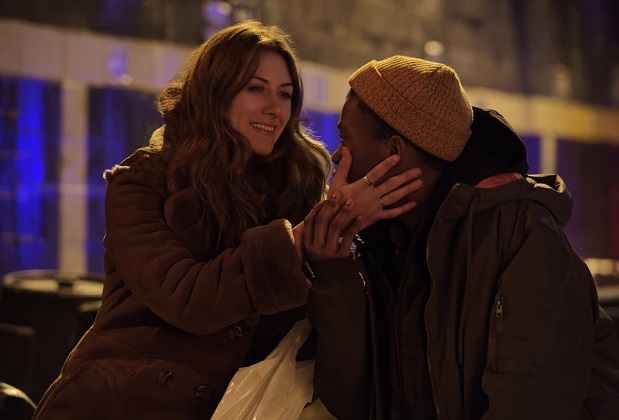 Outside of her roommate Jess (Foursome‘s Brooke Markham), Murphy’s lone friend is a sweet 17-year-old named Tyson (Thamela Mpumlwana), who sells drugs for his cousin Darnell (Bosch‘s Keston John), but once saved Murphy’s life after she was mugged. When Murphy stumbles upon a body in their meeting spot and feels the face, she’s convinced that it’s Tyson. But the police find no body, and seeing as how their only witness is blind and wasted, they brush off the case. That causes Murphy to spiral even further into self-destruction and sleep with a married donor to a guide dog school owned by her adoptive parents (NCIS: New Orleans‘ Derek Webster and The West Wing‘s Kathleen York). In a terrible but hilarious moment, Murphy realizes that she’s hidden from the guy’s wife under a glass coffee table. 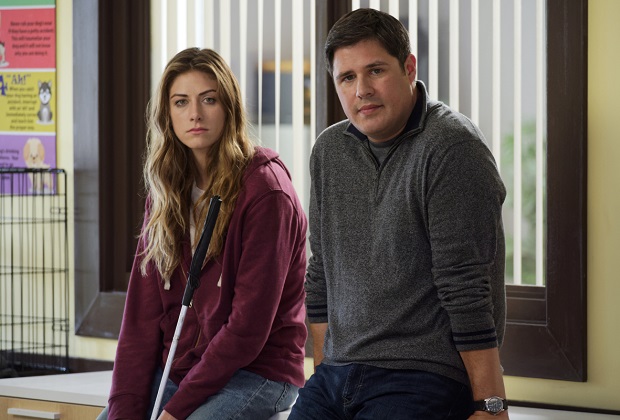 While Murphy doesn’t give a crap about herself, she does care about Tyson. Even after he texts her, she remains convinced that he was murdered and someone has his phone. After all, he knows how much she hates texting. Darnell, however, says his cousin ran off with a girl. The normally apathetic Murphy takes matters into her own hands and, with the help of a store clerk, tracks down Tyson’s cell phone to an underpass. That’s enough to pique Darnell’s interest as he insists that she not go to the cops and instead let him handle this. Hmmm, suspicious. She agrees, but then turns over the phone to Detective Dean Riley (Mad Men‘s Rich Sommer), who has a blind daughter.

Both Murphy and the series are a nice change of pace for The CW, but does it feel like In the Dark is trying to be three shows in one? Grade the premiere below, then hit the comments with your thoughts!