One Diggle family member (and an unexpected one at that!) has thus far been accounted for in Arrow‘s Season 7 flash-forwards to the year 2040. But what about John and Lyla’s other son? And need we worry about Diggle himself?

In the Feb. 4 episode of the CW drama, Mia (played by Katherine McNamara) worked in tandem alongside a young man who was eventually identified as Connor Hawke (played by Joseph David-Jones). Now, in a Season 1 Legends of Tomorrow episode that visited a possible 2046, Connor Hawke/the new Green Arrow was revealed to be a grown-up John Diggle Jr. aka John and Lyla’s firstborn son (who pre-Flashpoint had been a daughter! #TimeTravel).

Arrow‘s flash-forwards, though, were established early on to be following a different timeline than Legends‘ erased version of 2046, and the Connor now being played by David-Jones is actually the child of Ben Turner aka Bronze Tiger. He also is an agent for Knightwatch (which adult William dubbed a “good version of A.R.G.U.S.”) and he apparently had/has a “thing” going on with Oliver and Felicity’s grown daughter. 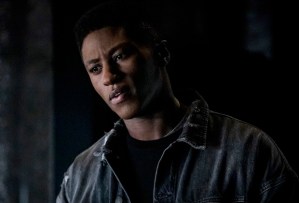 Yeah, it’s all a bit confusing. So we asked Arrow showrunner Beth Schwartz, at the Writers Guild Foundation’s WGFestival 2019, to shed light on the scion switcheroo.

“We thought it was really interesting to introduce something new that was unexpected,” Schwartz explained. “Instead of taking everyone we knew from the present and seeing what happens in the future, we thought it’d be really cool to introduce a new kind of character.” As a result, “In addition to having JJ, [John and Lyla] adopted Connor, and we’re going to see that unfold more in [Episode] 19 (airing April 22), in terms of that relationship.”

Make no mistake, John Jr. also exists in the future, and “we’ll explain where he is” in an upcoming episode, says Schwartz, noting that the brothers share “an interesting dynamic.”

But what about the lads’ dad? David Ramsey has said that Diggle is “alive and well 20 years into the future… he’s quite well, in fact,” hinting at a huge reveal for family patriarch. Speaking to Diggle’s said fate, Schwartz assured TVLine, “It will be explained eventually.” (With reporting by Vlada Gelman)