Do you, Jimmy, take this… stack of pancakes?

FXX’s pitch-black hipster rom-com You’re the Worst wrapped up a five-season run on Wednesday with central lovebirds Jimmy and Gretchen preparing to walk down the aisle. But they didn’t end up getting married… and they didn’t split up, either. Instead, after realizing that neither of them really wanted to get married, they ditched the ceremony and ran off to a diner for some breakfast, making a pact: They’ll decide each day if they want to stay together, until they don’t want to anymore. And in flash-forwards, we saw that they did stay together and have a daughter (and move out of Jimmy’s house), while Lindsay got remarried to Paul, Vernon started a mobile medical-care truck and Edgar moved away from the gang to pursue his comedy career in New York City.

To make sense of that final narrative curveball, TVLine reached out to creator/executive producer Stephen Falk, who wrote and directed the finale. Below, he explains the thinking behind Jimmy and Gretchen’s big decision — and why it was ultimately “kind of bulls—t” — and how Edgar finally broke away from being a typical sitcom “sidekick.” 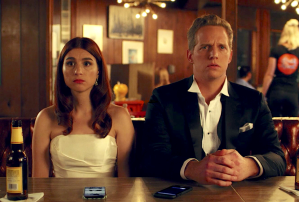 TVLINE | Did you know from the beginning that you wanted Jimmy and Gretchen to end up together, but not married?
No, I think all options were on the table. Pretty early in the run, I ruled out the idea of breaking them up for good. That just felt needlessly cynical. I don’t know if anyone’s ever done that well. Like, Broadcast News did it well, but it needed a coda of [them] meeting ten years later, and everyone’s happy and moved on, and they can yet again be friends. And we do sort of give that ending to Jimmy and Edgar. But no, I didn’t even know the series was even necessarily going to end with the wedding. The economics of TV are such that, if they had asked me to keep going and keep going, and everyone wanted to, I was pretty sure I could’ve kept things going, and found new roads for them. Like, Season 6 could’ve ended up being about kids, or whatever normal signposts of a relationship that I’ve always wanted to tell with this story.

But when we settled on that being the ending, then the hard part came in how to leave them, and how to sort of build tension in this season. I think around Season 3, I started working through the binary problem of, “Are they gonna get married or not?” And I came upon the third choice, which seemed weirdly radical in my mind, but actually, the more we talked about it in the room, seemed really, really perfect for Jimmy and Gretchen.

TVLINE | It’s interesting that they ended up having a kid together, because that seems like a bigger life commitment than getting married.
Yes! I think, sort of counter-intuitively, it is. But at the end of the day, the choice that Jimmy and Gretchen make, to bail on everyone and go eat diner food and give themselves this sort of out, this commitment that they will only make a commitment for one day, each day, is poetic and kind of lovely, but at the same time, it’s very much just a cheat. It’s the same thing we all do. It’s sort of a verbal escape valve they’re giving themselves, and like a lot of things that Jimmy and Gretchen do, it’s kind of bulls–t. But it works for them. 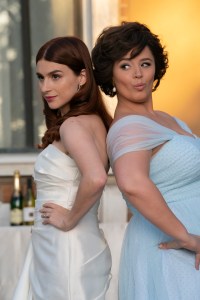 TVLINE | In the end, we do actually see Lindsay and Paul get remarried. So it’s not that marriage doesn’t work for anyone. It just doesn’t work for Jimmy and Gretchen.
Yeah, I think they have a point. When you’re writing good, well-rounded characters, you have to be able to take any side of any argument, and I think there is some truth to the idea that standing up in front of a bunch of people and vowing to feel a certain way… there is a bulls–t quality to that. So for Jimmy and Gretchen, it just is the truth for them. But for Lindsay and Paul, they’re weirdly more traditional… even though Lindsay likes to f–k other guys in front of him. [Laughs] For them, coming back, having gone through some sort of metamorphosis, real or imagined, it makes sense for them and is where they want to end up. And I think it’s lovely for them, too. Whether it’s going to last a day or a lifetime, I do not know.

TVLINE | You slip in this flash-forward midway through the finale, where we think we’re at Jimmy and Gretchen’s wedding, but we’re actually at Paul and Lindsay’s wedding. It allows you to give us a mini happy ending before the ending.
Yes, it’s a little bit of a puzzle. It was fun to play around in the editing room. I was never a hundred percent sure if it was going to be completely clear what was happening, but I think it’s clear enough. And I didn’t know if it was going to render the ending of their fight less dramatic, or let the air out, but I think it’s actually really good. It allows us to fill in the blanks of a dramatic moment, and just to see how these two timelines we’ve been playing with since Episode 4 kind of converge in different ways. It allows us to show in the moment that actually, the breakup that we’ve been teasing is not Jimmy and Gretchen, but rather Jimmy and Edgar. We sort of shift the central relationship in a way, at least for a little while, to them, and for me, that’s really satisfying. We realize it wasn’t a mystery of: “Are they gonna get married?” It was a mystery of: “Is Edgar going to be able to get out of Jimmy’s orbit?” Which is something he desperately needed to do. [Laughs] 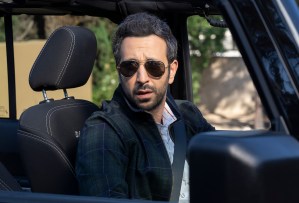 TVLINE | Yeah, Edgar told Jimmy he needed to find a way to get away from him. Why did you decide to split up that core friendship in the end?
I wanted to provide happiness for the characters. I love the characters. I wanted to show some forward movement and growth. And I think Edgar’s the one who needed it the most. Edgar’s been trying to get away from Jimmy since Season 1, and he’s grown a lot. He’s come into his own. But the last thing he had to do was get the thrust, get the rocket boosters enough to get out of Jimmy’s orbit. He was always sucked back in. I think he thought he needed to save Jimmy and Gretchen from each other, but what he was doing, really, was severing the relationship and making Jimmy do what Edgar could never do, and that’s force Edgar to leave. That’s what allows him to survive, really, and become a realized human being. Living with Jimmy, he was always going to be the damaged veteran, formerly homeless freeloader, and always subservient, and always, formalistically for a rom-com, a sidekick. By getting away, he allowed himself to take center stage of his own life.

What’d you think of the You’re the Worst finale? Give it a grade in our poll below, and hit the comments below to share your post-finale thoughts.