Boomerang will be coming back.

BET announced on Tuesday that it has renewed its follow-up to the 1992 feature film as well as American Soul, both for Season 2.

“Making Boomerang has been one of the highlights of my career,” executive producer Lena Waithe said in a statement, “and the positive feedback we’ve gotten from fans and critics has been so validating. I’m beyond excited to dive even deeper into these characters’ lives in Season 2.”

Boomerang centers on Simone Graham, daughter Marcus Graham and Angela Lewis (played in the movie by Eddie Murphy and series EP Halle Berry), and Bryson Broyer (son of Jaqueline Broyer, who was played by Robin Givens), marketing professionals who are trying to step out of their parents’ shadows. The series airs Tuesdays at 10/9c, with its season finale set for April 9.

This week’s penultimate Season 1 episode, penned by Waithe and Jenny Lee, explores what happens when Marcus, a notorious womanizer, is brought down by scandal and The Graham Agency is closed forever. Exploring everyone from Bill Cosby to R. Kelly, the episode “Us Too” promises “an honest and intimate look at all sides of the #MeToo movement from the black millennial perspective.” 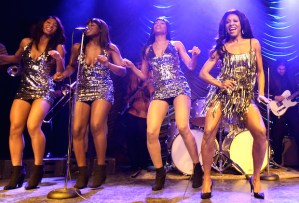 American Soul‘s freshman finale, airing tonight at 9 pm, features guest appearances by Gabrielle Dennis (The Bobby Brown Story) and McKinley Freeman (Hit the Floor) as Tina and Ike Turner. Meanwhile, as Don secures a second season for Soul Train, he decides to focus on repairing his family — but may find it’s too little, too late.